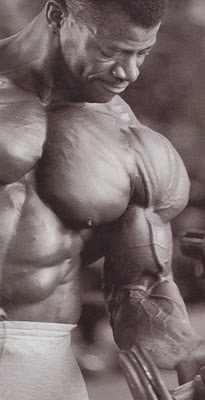 Terrific shoulders are not hereditary. At best, a man can be born with naturally wide clavicles and fairly well shaped deltoid structures - but actually big, really powerful and impressive shoulders must be BUILT. In this article we will discuss how you can build them.

IRONMAN's readers comprise - for the most part - the hard-core, essentially dedicated barbell men. The phonies, the wise-guys and the muscleheads tend to steer clear of this publication, and for good reason. Peary Rader has never permitted wishful thinking to run hog-wild over IRONMAN's pages. Articles in this magazine, in whatever aspects they may differ from one another, hold this principle in common: Give the honest truth about training. Don't fabricate, don't lie, don't make crazy or fantastic promises. Push honest work, because that's what builds honest muscles.

I have always held this philosophy myself, with regard to my own work for IRONMAN - and I want to stress at the outset of this month's feature that EFFORT - effort, effort, effort will be required of you if you want Supeman shoulders - or even if you have hopes of approximating that ideal. don't kid yourself about there being an easy road to follow. It's a long, tough climb. But it's a lot longer, and a heck of a lot tougher when you don't know what you're doing.

Some time ago I was introduced to a young man by a mutual acquaintance of ours who was concerned over his friend. The acquaintance was concerned, since, as he told me, the fellow was going off the deep end with regard to his training, and he was beginning to lose all semblance of a normal life. He had begun training a year ago, and now, he was specializing on his shoulders. Trouble was, he was concerned about little else! He dreamed about deltoids.

Now, I go for enthusiasm, but this was, even to me, ridiculous. "Would I try to help this guy see the light?" our acquaintance wanted to know.

"So you write for IRONMAN?" Larry the young man said when we were introduced. He had big, brown eyes, like a hungry St. Barnard, and a handshake like a wet fish.

"Yes, Larry, that's right. Have you read any of my stuff?" I said smiling.

My smile vanished. "I see."

"Say," he said, leaning forward slightly. "Whaddya know about shoulders?" he asked, as though we were sharing a secret.

"Jeez! Shoulders, man! Don't you know what shoulders are?"

I smiled, wondering if I ought to belt him once on his nose. "Oh sure," I said. "Shoulders. What did you want to know about shoulders?"

"Well," he said, flexing his lats, "I'm on a shoulder specialization schedule."

I wanted to tell him to go on a head specialization schedule. But I smiled, and in my most professional tone, I said, "How nice. What exercises are you doing?"

"And presses behind the neck."

I turned my head a little to the side, and I was going to ask him how many sets and reps he did on those three movements, but he went on . . .

"And the upright row."

"And bent laterals. And front raises. And seated dumbbell presses, with some seated laterals . . ."

"Are you crazy?" I mumbled while he spoke.

"Wrong? Wrong? Why nothing!" I answered. "How often do you train like that?"

"Yep" he smiled. "I top off every workout with my shoulder routine."

"Oh, no," I said. "Of course not. Heaven forbid you shou8ld undertrain." I frowned. "You might rot."

"Say, you sound like you don't think too much of my schedule."

"Now what on earth could have made you think that?"

"I dunno." He scratched his head.

"Well actually, I do think your routine could stand a few minor adjustments. Just a couple of small details switched around a bit, to give you better results.?

"Yeah," he said. "I guess I could start doing four sets of each exercise, if I put my mind to it," he mused.

What mind? I was thinking, but since I'm very kindhearted, I said, "No, Larry - this may be a shock to you - but I think you should do less."

"Yes. You should cut your schedule to five exercises," I got in, before he interrupted.

"Look, Larry, it's all you need. And they shouldn't be five shoulder exercises, either."

"Look, I'll be honest with you. Your present schedule is lousy. If you keep it up, you'll start to look like a bamboo shoot within two months."

"Yes. How much actual progress have you made since you started this shoulder routine?"

I know," I said. "It stands to reason that you haven't been able to gain. You're overworking."

"But only five exercises?"

"Only five," I assured him

"Great," I said. "You won't be sorry." I took out a pad and pencil and wrote out the following routine:

I handed the slip of paper to Larry.

"This doesn't look like too much work," he said.

"Should I train every day?"

"Three times a week. NO MORE."

"That's what you think. I want you to use every single ounce of weight that you can manage in exercises 1, 2 and 4. And use enough to make you sweat in the other two."

"But I never worked that hard."

He didn't seem too happy.

"Do I have to train so hard on the squats and deadlifts?" he asked.

"That's a cheering thought," he muttered.

"It is, isn't it? Well you said you wanted results, didn't you?"

"Yes. And I'll do what you suggest," he said. "But are you absolutely sure that I'm not leaving off any of the most important shoulder stuff?"

"Look, Larry," I said. "The most important - the most effective and result producing exercises you can do for your shoulders are the few I gave you. Even the lateral raise can be considered almost a "secondary" exercise. And it is, too, except in a shoulder specialization schedule."

"Nothing. Okay. I'm gonna give her a try all right. How long before I see results?"

"You'll notice improvement after three weeks to a month. In three or four months you'll have transformed your shoulder structure. You'll be really impressive."

Larry started on the schedule - the same one outlined for you here in IRONMAN - and I have to give him credit. He stuck it out until he got really good results. When I saw him a few months later he had a terrific pair of shoulders. They looked like small coconuts. He was smiling like a kid on Christmas morning.

"You look great!" I told him. I was genuinely happy for his progress.

"Thanks, man," he said. "Well, I gotta say you really steered me right."

"My pleasure, Larry." I figured he wasn't such a bad fellow, after all.

"You have?" I said. "You mean you're reading my stuff in IRONMAN?" I was smiling from ear to ear. 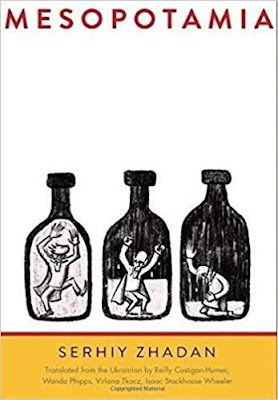 - To know Dublin, read your Joyce, for Macondo, Garcia Marquez, and for Mesopotamia, Serhiy Zhadan. Of course, this Mesopotamia is not the Birthplace of Civilization (or is it?), it's Kharkiv, the Ukranian Center of Nothing, located smack-dab on the Russian border, which, in Zhadan's brilliant vision, is smack-dab in the middle of life lived beyond the fullest because any second could be your last, creaming with joy, madness, war, orgasm, stupidity, and a blinding light that smells like the essence of human spirit. We need to learn from Ukraine. Zhadan is a masterful teacher.

The use of poetry as Notes - so far as I know, this has never been done before and is positively Nabokovian. This book is world-class literature.