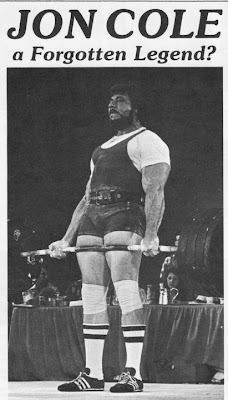 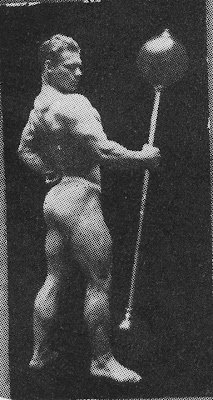 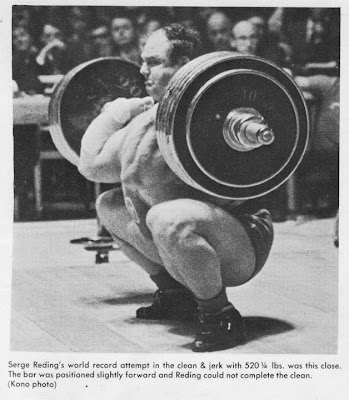 Ron Fernando, one of the finest writers in the current Iron Game, recently passed away. His work with Powerlifting USA formed the backbone of the magazine, and he will be remembered.

For an article by Mr. Fernando on Doug Hepburn, see this link -
http://www.powerliftingwatch.com/files/Doug%20Hepburn.doc

And the mostest poetic version of the song mentioned
http://www.youtube.com/watch?v=-feif-Q6Kok


In an age where such mammoth poundages as 900 plus squats and 500 plus bench presses are becoming the rule and not the exception, people, especially some of the younger lifters, tend to forget some of the true giants of the sport who were hoisting that type of iron when NO ONE was doing it. Certainly George Frenn was one of them, but someone who in my opinion stood above even Frenn, not only because of his higher PL totals but due to his overall excellence in Olympic lifting and track, was the Arizona Titan, Jon Cole. Cole was, during the early 1970’s, THE premier strongman in the world. I remember a piece that the Arizona Register did on him some ten years ago – during the time when he was claiming to be the ‘World’s Strongest Man’. Ridiculous, I thought as I read it – who in their right mind could claim to be stronger than Alexeev or the immortal Paul Anderson? I was soon to be proven wrong when Cole set the strength world back on its ears with a world-shattering 2,370 lb. total. He wore the equipment of the day, but remember, there were NO supersuits, superwraps or powerbelts back then. For those purists who decry individuals such as Frenn, Cole, etc. – who were trailblazers for modern powerlifting – let me remind you that there are few if ANY lifters today who push the REALLY big numbers without the use of so-called supportive aids. Hey, let some of the armchair experts get under a 600-700 lb. squat and I’m sure they would change their minds. At any rate Jon’s lifting style was nothing short of EXPLOSIVE. I dug up an older copy of Powerlifting USA (remember when they used to look like the TV supplement in the newspaper?), and the print on Cole in the HIPC article read “despite a tendency to crash and bounce out of his squats, Cole seemed to absolutely RIP the weights up – he was worried more about maintaining his image . . .” Yes, Cole has always had an aura of mystery about him and perpetuated this by cultivating a very dramatic beard which set off his tremendous physique (good God, his arms had veins like battery cables!).

Additionally, Jon posted an incredible 1200 lb. total in Olympic lifting with only a few contests under his belt (this was broken down into a super-easy 430 press, 340 snatch which was blasted up, and a 430 jerk which was nothing more than a push-jerk) during a period of time when Ken Patera’s 1300 total was numero uno in the USA (don’t forget, Patera was a specialist in Olympic lifting. Peary Rader of Iron Man magazine said . . . “After many years of looking we finally may have a man to challenge the might of the Russians in the superheavyweight class. This is a man of enormous bodypower - a true champion in another field – Jon Cole.”

I even had the nerve to write to Jon when I was 19 to ask him advice. To my great surprise I received a letter with the Arizona State Sun Devil logo on it (at that time Jon was the head strength coach at ASU) stating that I should call him COLLECT and talk to him about a training schedule (more on that later). His coaching position was not some hokey job invented by a promoter to give Jon credibility outside his lifting. During the years when Jon was associated with A-State, they produced such athletes as Danny White (Dallas’ quarterback), Woody Green (1973 consensus All-American in football), Mark Murro (300-plus feet javelin thrower), Ben Hawkins, Calvin Demery, Windlan Hall, John Jefferson, Bob Breunig, etc. . . the list could go on forever, sounding like a Who’s Who for the NFL and NBA, not to mention ‘Mr. October’ Reggie Jackson, Sal Bando, Rick Monday, Gary Gentry, Bump Wills and a host of other fine baseball players. Jon’s methods were BRUTALLY simple. Basically he advocated free weights over machines (this was also the time when Arthur Jones’ Nautilus machines were spreading like wildfire through the country) and, unlike other so-called strength coaches who derived most of their information from the library, Jon was living, breathing testament to his athletic principles. He had the AAU football players so psyched up on the iron that they would actually train DURING the season. I remember talking to Benny Malone at a contest in Arizona some time ago and he told me that Cole had them doing two pressing movements and one leg movement the night prior to a game. They literally MASSACRED their competition. Scores like 48-6, 60-0, etc. were commonplace to Sun Devil fans. It was largely due to the fact that ASU totally dominated football and the University of Arizona did the same number in basketball that the two Arizona schools left for the PAC-10.

Cole emphasized strict form in all of the movements: paused benches, deep squats, etc. If you couldn’t do the moves correctly and didn’t want to learn, your butt was booted out of the ASU weight room pronto! Basic moves such as squats, bench presses, inclines, upright rows, triceps presses (lying and standing), power cleans, military presses and calf raises were the staple of Cole’s programs for the ASU athletes. He outlined a program specifically for each event in track (i.e. a program for the sprinters, throwers, jumpers, vaulters, etc.). I firmly believe that it was because Jon left ASU that for a few years their total athletic program suffered.

Of course, there is the subject of his own training. I have never seen Jon train, but have know others who have. Would you believe two days per week for six to eight hours a crack? Yep, Jon would train twice per week with the likes of Pat Neve (former 181 lb. BP record holder and Mr. USA), Jack Barnes, Mike Matousek, Mike Civalier, Billy ‘Superstar’ Graham, Marvin Allen and teenage phenom Randy Collett at Granny Thorbecke’s double-car garage gym in Scottsdale (a stone’s throw from ASU). Jon would usually start his workout with the bench press and perform around 12 sets (2-3 warmups, 5 sets of 2-3 reps with heavy weight, and some flush sets). Following the benches he would attack the squats, and do mean ATTACK. To see Cole squat is to witness the true athletic explosion personified.

He advocated the pyramid system in all of his lifting, which he would cycle according to personal ‘feel’. Additionally, Jon had a lot of his lifters and ball players performing true power squats. At that time, people were still squatting using the old Olympic stance. Jon proved that one could handle significantly more weight by changing the stress points from the knees to the hips and back. Jon was the first man to officially squat 900 and for years had the highest superheavyweight total around. Actually, Jon was not a natural super. Standing 5’10” he hadn’t the height necessary for carrying 330 lbs. plus like Reinhoudt, Jo-Jo White, Kenady, Kaz, etc. His deadlifts were awesome, especially since he worked them but ONCE PER MONTH. On the other days, Jon would do either power snatches or the clean & press movement (where each rep is cleaned separately an then pressed). The incline bench was another favorite of Cole’s, who reportedly inclined over 500 in his prime. He would usually follow a workout with several sets of triceps presses (he was capable of an OVERHEAD triceps press with 315) and curls, plus several sets of toe raises. Jon would usually work out on Tuesday and then again on Friday. This is the same system that many of the lifters in Arizona are using today.

He became a successful businessman with his own health club (Jon Cole Systems) in Scottsdale and is now strength consultant to the Phoenix Suns, Phoenix Roadrunners and many professional athletes residing in the Phoenix area.

As for the system he passed along to me – I still use a lot of the same methods and heartily advocate it to anyone. Basically it involves viewing the workout cycle as not being on a weekly cycle, but that of a bi-monthly one. “People think too chronologically – that’s why they feel old at a certain numerical age when they felt great the year before” At any rate, the two week cycle goes something like:


As seen, a very interesting mixture of the Power Three and key assistance moves. Jon liked to cycle the inclines and the benches as well as the front squats. Lost of arm work but strangely enough, no direct delt or lat work. Oh well, you can’t argue with the results.

A cagey Las Vegas promoter offered Jon somewhere in the neighborhood of 18 grand a week to ‘lift’ in a show a platform loaded with a bevy of Vegas showgirls. The catch was that he HAD to be a bonafide World Champion. Unfortunately, Jon sustained a mysterious injury to his right knee prior to his departure for the World’s Championships in York, Pennsylvania. Controversy still surrounds Cole, because some say that he ‘ducked’ competition (Jim Williams and John Kuc specifically), and only performed his record lifts on his home turf. He did officially win the 242s at HIPC I with a 2085 total against McCormick, Phillips, Ulf Morin, etc. I do believe that those gentlemen can be classified as fine competition.

Anyway, Jon is in ‘semi-retirement’ now, but still has that tremendous physique. He has little time to train due to his business commitments, yet, I was told that not too long ago he was able to come out of his office and ram up an easy set of 5 with 450 in the bench press, and this after a seven month layoff! The legend of Jon Cole lives on . . .