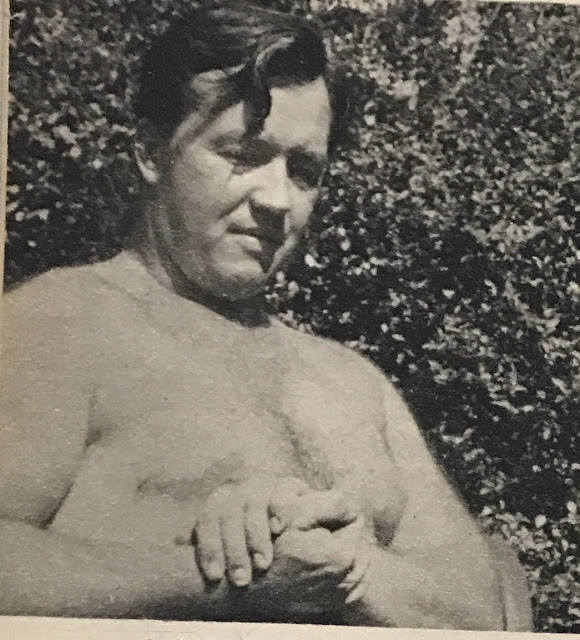 
From the earliest recorded history right down to modern times there have been men who were famed for their superhuman strength. People talked in wonder about the feats, books were written about them - they will always be remembered and admired by those who crave great strength.

There have been other men who, perhaps, were just as strong as the "greats," but their names have been lost over the years so that today they are unknown Some men are simply not thrown into the orbit of the vast publicity that others manage to secure.

Such a man is William Boone

I'll bet that 95% of you have never even seen his name, yet his tremendous feats of strength will startle you with their immensity.

Boone is a really big man standing 71 inches in height, his weight varying between 200 and 285 pounds. He can control his weight easily and varies it according to the lift which he is concentrating on at that time.

At his top weight his measurements include an expanded chest of 56, waist 43, thighs well over 30, neck 20, and upper arm 20. Quite imposing, you must admit.

Boone has divided his time between several different lifts and has tried to increase his records in these chosen feats to the limit of his ability. He hasn't been able to train as much as he would have liked, because his job requires that he work from early morning to well after dark. 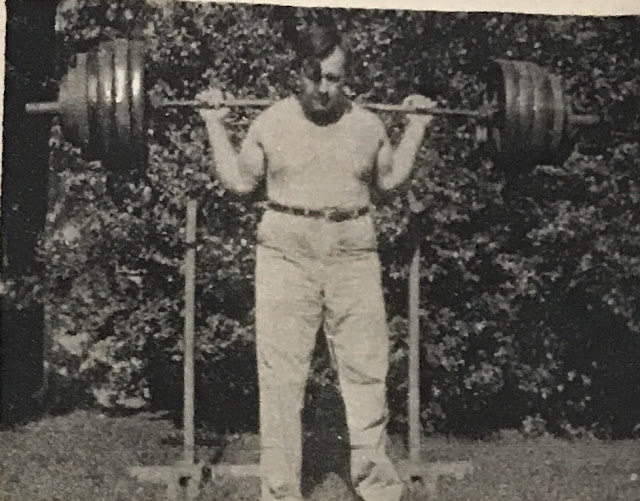 
He believes that the best single exercise for all around power is the deep knee bend. To develop size he uses sets of 33 reps with as much weight as he can handle, which is usually up to 330 pounds. For a  combination of bulk and power he uses sets of 10 with 330-460 pounds.

When training for lifting power he begins with medium weights and works to, or almost to his limit in sets of one repetition. His record for the deep knee bend is 575 pounds, and was made before witnesses who will vouch for the correctness of the weight.

This is a lot of weight as all you users of heavy squats well know, but Boone has always done squats as an exercise and has not tried to push himself to his limit on a single attempt. There is no question that he could do over 600. He finds that his practice of performing heavy squats has greatly increased his ability in other lifts which he favors more than squats, and it is for this purpose that he does them.

After building up his strength and power Boone became interested in the famous bent press lift.

There's more, but this two-part series is a great start:
http://ditillo2.blogspot.com/2012/03/how-much-can-you-bent-press-part-two.html

The great records of Arthur Saxon made Boone want to exceed 300 pounds in this lift. He quickly discovered that a small waist increased his ability to use heavy weights in the bent press. He reduced to 212 pounds (at which he had a 32 inch waist) and succeeded with an amazing 315 pounds. Boone later attempted 365 and was able to get the weight at arm's length, but the strain involved caused him to become dizzy and he had to drop it.

He says he has lost count of the times he has made a complete lift of 300 pounds. He turned over to the shoulder with both hands and then supported with one hand the monumental weight of 420 pounds. I'll bet 300 felt light after this!

When Boone first became interested in training for power he admired the feats of the great Karl Swoboda, especially his jerk from the shoulders with 100 kilos or 440 pounds. After quite a bit of practice and hard work Boone jerked the colossal weight of 455 pounds to arms' length and held it well past the count. As far as I know this is the most weight ever lifted overhead by anyone [the date on original publication of this article is so far unknown]. Doug Hepburn recently push pressed 450 so he may have exceeded Boone's record by the time this reaches print.

He has several exercises that he favors when trying to work for a new record in the jerk They are:

1) Push Press
2) Supporting weights up to 700 pounds at the shoulders
3) Heavy loading of a bar on racks which are level with his face. He splits under the weight straight arms and arises.

Several years ago Boone was doing 500 pounds in exercise number 3. Then he read that Ronald Walker had also done 500 this way. He was sort of peeved that someone had equaled his record and set out with determination to do more. Within a short time he had increased his record to 600 pounds! He feels that this is the best lift of any kind that he has ever made.

Boone has several beliefs he has come by during his practice of the jerk. He has found that he must carry as much bodyweight as possible because this gives him the power to stand under heavy poundages. He made his heaviest jerk at a bodyweight of 283 pounds. Also he believes in the use of a 10 foot bar such as that used by the immortal Charles Rigoulot. Boone says the 10 foot bar gives more spring, making the weight less "dead." 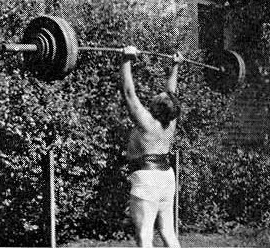 The great difference in bodyweight between what he feels is best for the bent press and other lifts such as the jerk, and deep knee bend, makes it impossible for him to practice them at the same time. When he weighed about 280 he tried a one arm press with 250 pounds and managed to get it up rather easily without bending very far to the side, but of course he probably couldn't have bent over any more if he had wanted to.

At this point I'll tell you about Boone's favorite lift which he practices more than any other, the Two Hands Dead Lift. 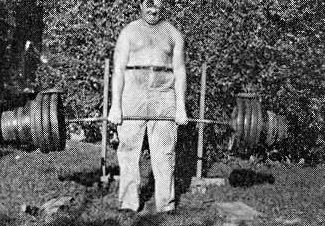 When he began the practice of this lift a a boy he used a very thick bar, as it was the only one he had. He deadlifted 590 pounds on this 2" bar when he was just 18 years old.

At this time he quit the dead lift for 10 years until 1946. When he then resumed lifting he found his old power had greatly lessened. This made him all the more determined to exceed his old records. Within a year of so he pulled 700 pounds all the way on two different occasions - before witnesses. The July 1948 issue of IRON MAN magazine carried a picture of this feat so if anyone questions it all he has to do is obtain a copy of this issue and see for himself.

By this time he had switched to the overhand hook grip. He has found this grip superior to the reverse grip he had used before. He advises anyone who is interested in deadlifting high poundages to use it.

Boone doesn't believe that a deadlfter must have huge hands, as his own are only average.

One of his favorite exercises that he uses in conjunction with his dead lift is this same lift performed in an 8" hole. More about this later. 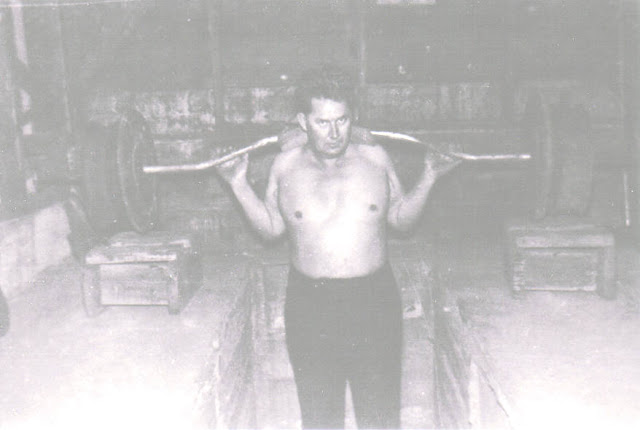 Joseph Curtis Hise. This was his version, used for squatting. Planks could be placed in the hole, thus enabling different starting heights for the squat. Photo courtesy of Joe Roark.

A couple of years back (1947 to be exact), Boone went to Chattanooga to compete against Bob Peoples, a man who holds the national record in the deadlift.

After the long drive from Shreveport, Louisiana (Boone's home) to Chattanooga, he went to the YMCA where he had been promised a room. For some reason or other they didn't have a room available but did manage to put him up in some room that was already occupied by other men, but he had to leave the room at seven the next morning. As a result of this he was only able to get five hours sleep. That night in the contest with Peoples he was successful with 670 to lead Peoples by 10 pounds. Peoples then called for 700 pounds and made a success. When weighed it was 699 pounds - a new record!

Rather than tie Peoples, Boone felt he should beat him because of his being much heavier. He tried four times with 710 pounds. The first two attempts he pulled to knee height, but failed to finish the lift. I mention this, because about six months ago a person by the name of Rye Bell wrote to another magazine that Boone had lifted only 660 pounds and "hadn't cleared the floor with 710." I thought the facts in this case would be of interest to readers.

On March 10, 1948, Boone resumed his practice of lifting in the 8" hole. At the start he could do only 650, but by May of the same year he had done 880 pounds. His greatest dead lift in this fashion is the staggering weight of (get this) 1,035 pounds! This lift was done on a regulation Jackson Olympic bar with extra weight tied on.

About this same time he dead lifted 660 pounds for 7 REPS IN THE "DEAD HANG" STYLE - that is, without the bar touching the ground between reps!

Before I forget - Boone's lift of 1,035 pounds in the hole was done without any artificial help such as hands tied to the bar, etc.

William Boone has never given any serious thought to the Olympic three, chiefly because of the two hands snatch. This lift or exercise, whichever you choose to call it, serves no purpose in his estimation.

His best two hands press of 315 pounds was made in 1936. As this was over the world record at the time Boone figured he had done enough so he gave up the press.

At the present time he is working hard at his business, being a water well contractor, so has not trained but a dozen or so times in over a year. He did take a workout about three weeks before this was written and managed to dead lift 650 pounds without much trouble. It seems strange that men like Boone and Charley Richards can maintain their power on such infrequent workouts.

Boone would like to engage in one more "big contest" and would be willing to compete against anyone of high caliber. He would especially like to dead lift against Doug Hepburn, Malcolm Brenner, John Davis, and last but not least, Bob Peoples, who is the best dead lifter in the world - "officially." All Boone asks is a warning of about three months so he can be at his best.

Shreveport is not exactly the hub of weightlifting activities in the United States, and is many, many miles from the big physique and lifting contests held regularly in the east and on the coast, and it is for this reason that William Boone has failed to achieve the acclaim he so richly deserves.