The young physical culturist is often just as ardent a "fan" of his particular favorites as the most film-struck teenager. 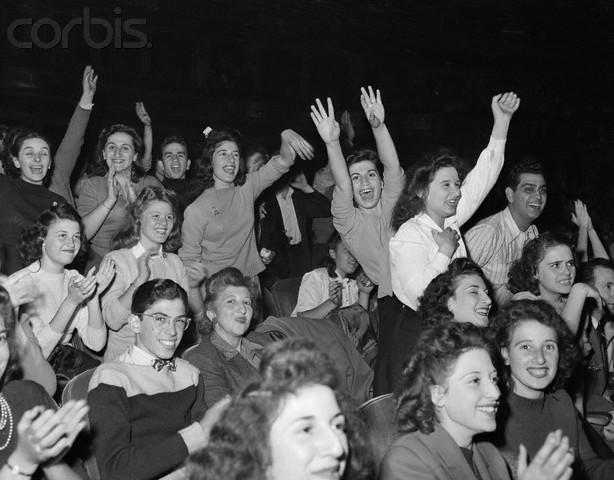 But, of course, there is a difference.

The youngsters who mob a film star are idolizing something that they regard as a standard of perfection but one to which they themselves do not hope to aspire.

The enthusiasts who surround John Grimek and Jim Halliday with autograph books at a championship meeting are venerating a standard of perfection which they regard as superlative, but which they hope one day to emulate.

The film star fan is an onlooker. The physique fan is at least in the same race as his idols, even if he is a long way down the course!

It isn't a bad thing, if you are a young body-building enthusiast, to be an ardent fan; but it can sometimes be dangerous and can often be disappointing. It is true that you are different from the hysterical hordes who try to tear the film star to pieces when he or she makes a personal appearance: they are looking at, and trying to touch, a world that is outside their ken, while your adulation is reserved for men who talk the same language and do the same things as yourself. But you can, and very often you do, build up around your particular idols a personality and a way of living that isn't true.

The film star fan deludes himself or herself (deliberately, according to some psychologists) that his or her idols stroll through life with the same assurance or the same seductive appeal as they display at a film premiere. And so, in spite of your closer affinity with them, it is all too easy for you to create similar delusions about your physique favorites: to make yourself believe that John Grimek is only John Grimek because he lives the perfect physical culture life and that Jim Halliday lives only for weight-lifting.

The fact is that the "greats" of the physical culture world - the Grimeks,j Reeves, Heidenstams, Rosses, Stephans and Theriaults in the physique group and the Davises, Stanczyks, Shams, Fayads, Hallidays and Creuses amongst the strongmen - are quite ordinary fellows. I suspect, though, of course, I may be altogether wrong - there are times when even the most glamorous film stars relax and become ordinary human beings; I know very well that John Davis doesn't always start the day by throwing back his bed-clothes and leaping to the window for his deep breathing exercises and that John Grimek doesn't always practice muscle control or even train for three hours every day!

Habits of the Great Ones

Let us look at some of the general habits of the "great" physical culturists - the men you have elevated to the top of your "fan" ladder - and see how different they are from the habits of the ordinary individual.

We will take, first of all, the matter of diet - and this, after all, is the basis of all physical progress.

Did you imagine that John Davis or John Grimek carefully selected the various salads they should consume? Did you think that they totalled up their vitamin intake before ordering a meal?

Let me disillusion you.

And this, I assure you, is typical of all great strong-men and physique champions. The men who win world titles at weightlifting or in physique competitions can, and often do, eat like horses. I have seen a great weight-lifter eat 50 bananas before winning a world championship. I have seen a man put away the prodigious quantity of five pounds of steak immediately before breaking a world record.

Did you take it for granted that your hero is a tee-totaller?

Perhaps he is. But most of the British weightlifting team (and the British team, in finishing third, didn't do so badly in the Olympic games) like a glass of beer occasionally. And so do most of the lifters from other countries.

Of the countries where smoking is popular at least 30% of the competitors in the lifting events at the Olympic Games smoked cigarettes, cigars or a pipe. Stuart, of Canada, was never without his cigar even in training . . . 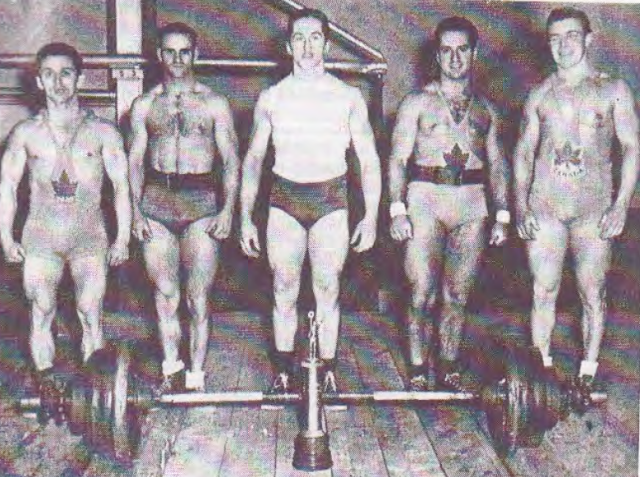 John Stuart, on your far right

. . . but he managed to out-press every one of his competitors in the lightweight class.

I make no apology for introducing this particular subject into the discussion, for so many young enthusiasts have a fear that the successful body-builder must be a man apart, devoting his entire energy to the business of improving his physique. In fact the greatest physiques the world has ever known have been displayed by men who were married and had families. Practically every great lifter is married and is a father.

This is the most dangerous subject of all. Do you really believe that Stan Stanczyk is kingpin of his class simply because he trains harder of longer than any other light-heavyweight? Do you think that John Davis reached his 1,000 pound total because there was something very special and very different about his training?

Let me tell you that neither Stan nor John, nor, indeed, any of the champions of the Iron Game of the physique world deserve any medals for the intensity or duration of their training sessions.

If medals were awarded on this score they would all be won by men whose names and photographs will never appear in print. You might easily deserve one yourself.

Be a "fan" by all means. Collect as many autographs and photographs as possible. The kings of the physical culture world deserve your admiration: the are "great" in the true sense of the word even if their greatness has largely been thrust upon them.

But don't build them up into false personalities - and don't try to copy their example.

Yes, I really mean this.

The "great" physical culturists, the men you instinctively admire above all others, had natural advantages which, if you are an ordinary youngster, you just don't possess.

The men you should try to copy are the "successful' physical culturists - men who make good from poor beginnings but without ever reaching the stage where an enthusiast asks them for an autograph. These men - the "successes" as I call them - very often are the complete and ideal physical culturists you might imagine a world champion to be. Often they are most meticulous on the subject of diet. Often they are complete tee-totallers and non-smokers. Their training routines are most carefully arranged and religiously followed.

Admire the famous physical culturists by all means.

But try to emulate the successful ones.