A Real Big THANKS TO LIAM TWEED for this one!

Note: This article is included in The Keys to Progress reprint book, but it's a special treat to have access to the original. I'm going to include the Bill March photos from the article as well. Thank You, Bill March! I believe Pete George is in the hyperextension photo there.

* Nope! Turns out it's Tony Garcy.

Making a point of it from here on in to, whenever possible,
NAME THE MEN IN THE PHOTOS.


Here's a way cool photo of some York fellows with a few visitors.
Courtesy of The Stark Center blog.
https://www.starkcenter.org/category/dont-weaken-by-terry-todd/ 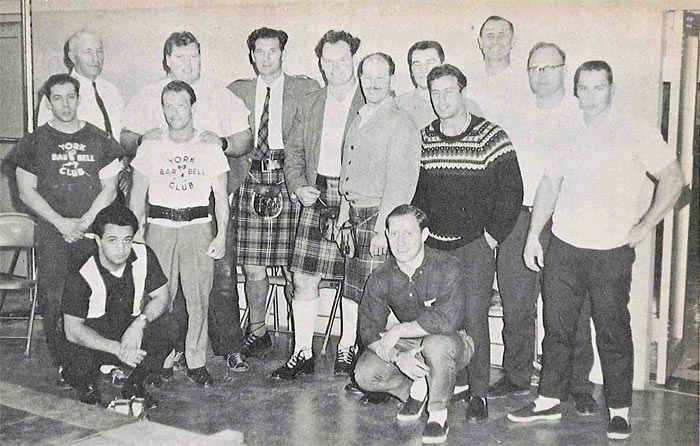 
I noticed that, in this slightly earlier article, McCallum wasn't using his usual "conversational" setup yet. That, and the development of his main characters came later. On a minor note, he also dropped most of his semicolon use by then.

This routine features the heavy breathing squat done in sets of 12 reps. Most programs go for one set of 20, or two 15's. 3 x 12 heavy breathing squats is a change you may want to implement at some time in the future. 1 x 20 to a plateau, then 2 x 15 to a stalemate, and finally 3 x 12 for a while. All the while utilizing the same basic heavy breathing squat technique. People have done 1 x 20 on Day One, 2 x 15 on Day Two, and 3 x 12 on Day Three as well. There's so many ways to vary things, aren't there!

This routine is all leg work, with pullovers. If you've never been there before, I think you're in for a real treat. Now, and in the none-too-distant future when you return to a regular layout.

Take it day by training day; don't think about other exercises and/or bodyparts; just lay it on hard and heavy every darn session.

"If you can walk normally immediately after this workout,
you aren't working hard enough!"

Would you like a herculean physique, that elusive combination of bulk, shape, and power?

If you're already enjoying maximum development - flip the page; if you're not - read on.

Developing great size and strength requires careful study of some pertinent facts. Let's examine them in a logical, step-by-step fashion.

Your ultimate size is determined by several factors - some you can alter; some you can't. You can't, for example, so much about your height or what your mother fed you as a baby. Those things have a bearing, they're important, but unfortunately they're out of your hands.

What do you do about hereditary and early environmental factors?

Concentrate on the factors you can alter.

There are three major issues that determine your size; fortunately you can control all three. These are:

Take them one at a time.

The science of nutrition has advanced enormously during the past few years - advanced to the point where anyone can bulk up if they will eat properly.

Diet has already been covered both extensively and well in this magazine [Strength & Health]. You don't need a detailed restatement; you may need reminding of the basic facts.

Protein is the key element for muscle building. Eat all the eggs, cheese, fish, and fowl you can. Eat meat like a starving tiger. Round out your meals with fresh fruit and vegetables, cooked or in salad form. Overeat very slightly while you're gaining weight - it won't hurt you - you can go back to normal eating afterwards.

Knock off three big meals per day; a snack between meals. Use protein, vitamin-mineral supplements, and fish oil [no, wait a few decades for that]. Drink all the milk you can hold - two quarts per day is the minimum.

You'll gain rapidly on this course if you eat well; you're wasting your time if you don't. You're going to develop lots of muscle, but you're going to have to eat lots of food. 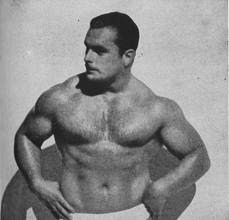 Maurice Jones . . .
tells of the time he and some friends were having supper, and one of the group stated he could top off the meal by eating a gallon of ice cream. Bets were made; the ice cream, a bowl, and a spoon placed on the table, and the optimistic trencherman began shovelling the ice cream down his throat. With monotonous regularity he filled the bowl, emptied it, filled it again, and emptied it again; while gradually, but inevitably, the process slowed. Finally, with only one bowlful left to go, he ground to a shuddering stop. Defeated, eyes glazed, shivering with cold and green with nausea, he lurched away - a sadder, wiser man.

Two days later, Maurice met him on the street, and the fellow began defending his performance.

Twenty years ago, pioneers in the weight game proved the effectiveness of enlarging the rib box for gaining bulk. Their concepts have been refined, but they have not been changed. To get big - enlarge your rib box!

The surest, fastest way to enlarge your rib box is by combining deep breathing with heavy leg work. Roger Eells, Joseph Curtis Hise, and Mark Berry were among the first to demonstrate this, registering astonishing gains on themselves and their pupils.

Note: you can find more by these men on this blog by searching here:

Every massively developed man since has used this principle. The combination of deep breathing and heavy leg work can result in an increase of several inches in chest size in one month alone. Heavy leg work and deep breathing will make your physique dreams come true.

(c) The size and strength of your legs: Heavy leg work is the key factor in acquiring a seam-bulging build. Sooner or later you must specialize on your legs. All the greats have done this at one time or another. Paul Anderson did little else but leg work during his primary training. He was squatting with record poundages before he ever tried much of anything else. When he started Olympic lifting, his basic power developed by leg work made him a champion overnight.

Doug Hepburn trained almost exclusively on heavy squats at various times in his career. John Davis specialized on leg work to increase his basic power. So has every strength star in the game.

John Grimek worked hard on leg work during his building-up process. His thighs used to be enourmous.

Bill Pearl squats with fantastic weights, and recommends them highly.

Reg Park says, "The squat is the key exercise for bulk and power."

The most remarkable thing about leg specialization is the ease and speed with which upper body gains are made afterwards. Expect big increases in arm size following leg work. Leg specialization, in addition to increased leg size, increases your assimilation of food, your chest size, your weight, your overall body mass. When you go back to regular training, your sleeve-bulging build will come with a rush.

The quickest way to big arms and shoulders is to specialize first on your legs.

Jolt yourself out of the rut. Work on your legs for two to three months, and then go back to your regular training. Your gains will astound you.

Here is your leg course:

Let's check them in order: 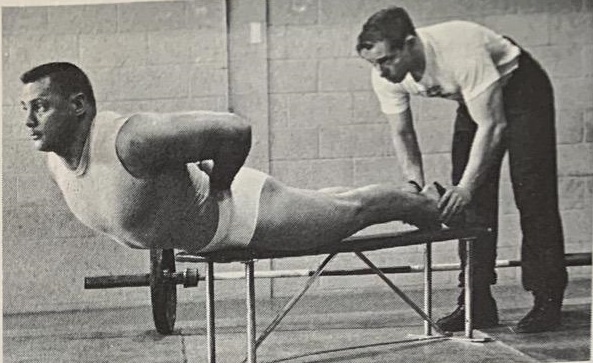 1) Prone Hyperextensions stimulate circulation in your spinal erectors. Take it easy with them, and don't use additional weight here. This is just a warmup to protect your lower back. 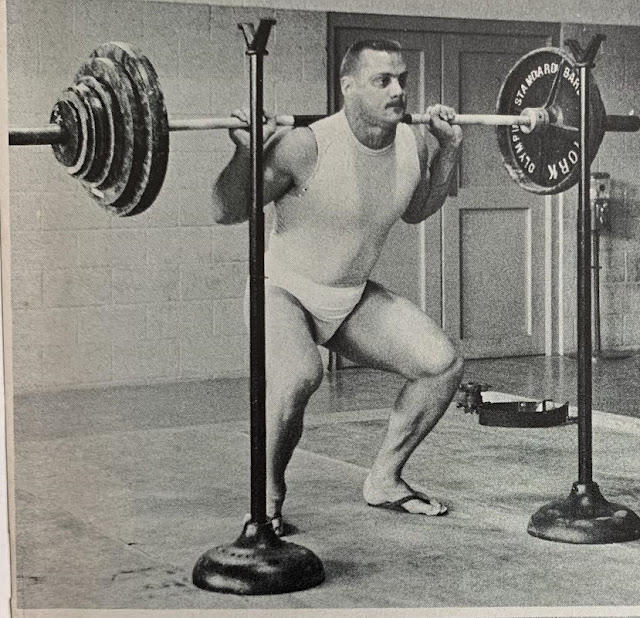 2) Squats are the key exercise! If you did nothing else you would get big and powerful. Do them in breathing style - three huge breaths between each rep, hold the last breath, squat. Suck in all the air you can hold; blow it out violently. Head up, back flat, don't hit rock bottom. Think big - pile on the weight. 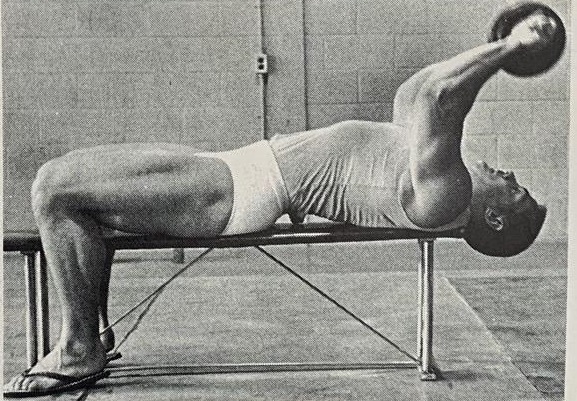 3) Pullovers stretch your rib box and lift your sternum. Breathe in as the weight goes back - all the air you can hold - breathe out as the weight returns to starting position. Don't use much weight - this is only a breathing exercise. 24 to 40 pounds is plenty.

Note: that's a swingbell in the photo, just in case you were wondering. 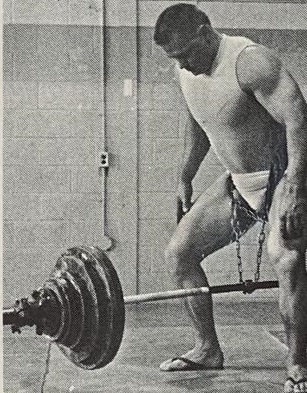 4) Hip Belt Squats are the absolute best for bulking your lower thigh.

Note: The photo shows Mr. March illustrating a shorter range movement something akin to an extended hip lift. Read the following instructions carefully to get the technique Mr. McCallum is recommending for this routine.

Pad the belt, ride it low on your hips, cinch the bar up close to your crotch. Use a 2x4 under your heels, and go ALL THE WAY down. Stand erect between repetitions and breathe as though you mean it. There's nothing on your shoulders to restrict you - make the most of it.

Loius Abele said, "I have worked so hard my teeth ached from the breathing.

Another good name to search for.

How hard should you work? To the limit! Get into a pitch, grit your teeth, grind out the reps. Dig!

Peary Rader [definitely search that one] says, "Most people have no conception of what hard work is."

5) More pullovers. There aren't many honest 50" chests around. Get one! And not many people know what a swingbell is. Not you, though. 6) Calf Raises draw blood into the legs while you rest from the heavy stuff. Work your calves all the way - complete contractions, complete extensions. Concentrate! 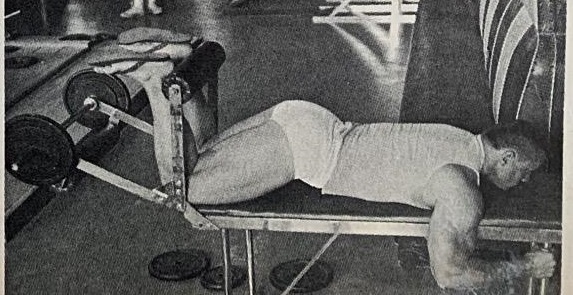 7) Thigh Curls are easy. Face down, padding under your knees, pump your thigh biceps until they scream. Hang on, force the reps. 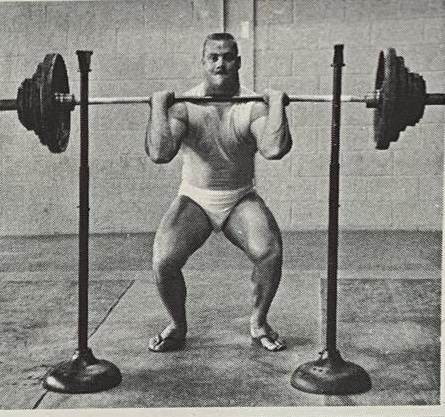 9) Front Squats; the lifter's standby. Wide grip, lift your elbows high. Your wrists may hurt at first, but they'll get used to it. Nobody ever died of sore wrists. A 2x4 under your heels [or weightlifting shoes], back straight, go all the way down. Terrific for shaping your thighs. Steve Reeves worked hard on front squats - nobody criticized his thighs. 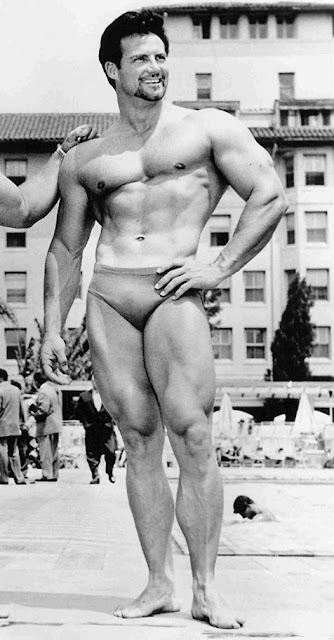 Note: I cropped the photo above from a post today on Bill Pearl's Facebook page. In this semi-relaxed pose, you get some idea of the incredible shape Reeves had. And if you're looking at doing a leg specialization layout . . . dang . . . look at that leg size and shape.

And that's that. Lie down and bleed a bit.

If you can walk normally immediately afterwards, you aren't working hard enough.

By alternating leg specialization with regular training, I went from 140 pounds at 6' tall with the worst bone structure imaginable to slightly over 250 in less than three years. You'll have a better framework than I had; you'll do better. 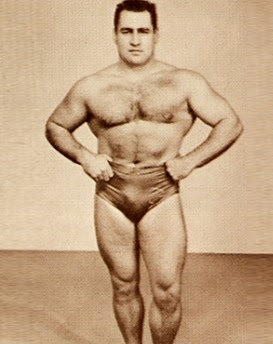 If you plan on buying new clothes right now -- Don't!

Three months from now they won't fit you.