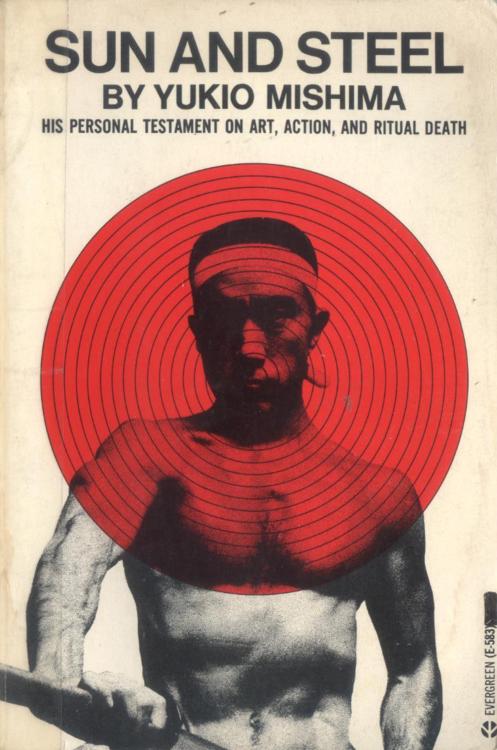 In this fascinating document, one of Japan's best known-and controversial-writers created what might be termed a new literary form. It is new because it combines elements of many existing types of writing, yet in the end fits into none of them.

At one level, it may be read as an account of how a puny, bookish boy discovered the importance of his own physical being; the 'sun and steel' of the title are themselves symbols respectively of the cult of the open air and the weights used in bodybuilding. At another level, it is a discussion by a major novelist of the relation between action and art, and his own highly polished art in particular. More personally, it is an account of one individual's search for identity and self-integration. Or again, the work could be seen as a demonstration of how an intensely individual preoccupation can be developed into a profound philosophy of life. The objective of a powerlifter is to lift as much weight as possible one time in each of the three lifts in a meet. The objective of power training is to increase the one rep maximum in each of the three lifts. Quite often powerlifters have problems attaining these two objectives. The lifter spends far too much time attempting the one rep maximum and not enough time increasing the maximum lift.

Power training should emphasize increasing the total. This means concentrating on personal records. These records are not one rep maximums, but are repetition maximums. Training should use sets of eights, fives, threes, and twos. These build strength. Singles in training have a very specific and limited place. I do not believe singles work all that well toward strength increase.

Phase One of the routine is a guide for off season training. It is based on the maximum weight which can be handled for a set of eight, five, and three. It will take three weeks to prepare to use this program. The program should only be used for nine weeks at a time because it is physically and mentally demanding.

The theory of the program is to set a repetition maximum in each category. The three categories are sets of eight, five, and three. This will be mentally and physically intense training because each training session is an all out effort. The reps, weights and equipment change each week to stimulate an increase in strength in a different way. Each training session as to be better than the last.

To start out the maximum weight must be tested in each lift for each rep scheme. The first week, determine the max for eight reps in the squat, bench, and deadlift, wearing only a belt. This will be considered a workout. Perform the squat, bench, and deadlift on different days. The program requires the squat and bench to be worked twice a week. One will be heavy and the other will be light. The deadlift is only worked once a week, heavy. The light workout should be two easy sets of five with 100 to 200 lbs less than the max. The assistance work is the lifter's choice. Next week, determine the five repetition max wearing a belt and wraps for the squat, bench, and deadlift. The following week, determine the three rep max wearing a suit (bench shirt), belt, and wraps for all three lifts. With this information the lifter is ready to begin phase one.

The second week, add the same amount outlined above to the max set of five reps in each of the three lifts. Wear a belt and wraps for the set of five.

The third week perform a set of three with the suit (bench shirt), belt, and wraps. Add weight as outlined above to the max set of three.

The next step is to start over with the eight reps and use the new max. Then repeat the threes and fives.

After this has been done start over again with the eights, fives, and threes. This whole program will take nine weeks. After the nine weeks return to your normal off season training routine.

If the max set with sets of eight, five, and three have increased it would be logical to assume the one rep max has increased also. This means an increased total. Over nine weeks the max should have increased 30 lbs in the squat and deadlift in each rep scheme and 15 lbs in the bench. This is quite an addition to the total.

Phase Two of the program is for meet preparation. The lifter is partially prepared by doing sets of three with the suit, belt, and wraps every third week. Do the exact same as above for sets of five, three, and two. Again, only use this program for nine weeks. This will be all the lifter needs to peak for a meet. The sets of three and two require a suit, belt, and wraps.

On meet day use the best set of three as an opener. The best set of two makes a nice second attempt. The third attempt should be shoot for the stars all time personal best. The total should have significantly increased over past performances.

This program is unconventional. It is not for everyone, but worth a try. The principles are sound. The weight is always increased in a reasonable, progressive manner. The reps change each week for mental and physical change. This helps prevent plateaus and staleness. The program allows heavy weight to be handled without the constant punishment of long, heavy low rep and high weight training cycles. The body is conditioned to handle heavy with a decreased chance of injury. A mini-peak is reached an dthe weight is reduced with increased reps. Because the body has just handled heavy weight, the new max plus weight will not be a shock. The body handles heavy weight every third week and is then always ready for the heavy load. Variety in training often leads to positive changes. Give this unique program a try.