These  photos show Jake Stefan performing in different positions of the Clean and Jerk. At upper left he starts a 380 pull and has it hip high in the second photo, while in the third photo he starts under the weight. In the lower photos he catches the weight and then fights his way up to jerking position. He has 441 in the two lower outside photos. 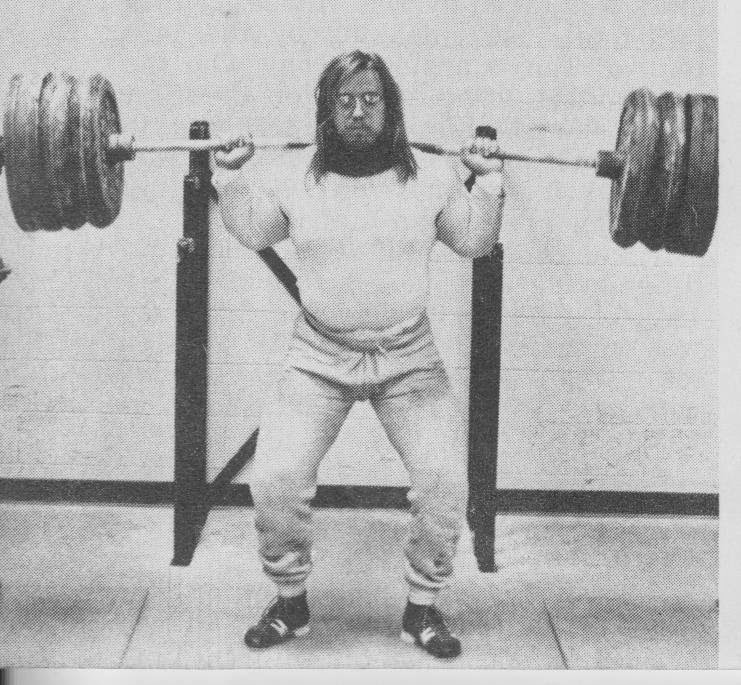 Stefan doing repetition squats for developing power in his Clean and Jerk, with about 500 on the bar.

During the recent CBS coverage of the Senior Nationals, American weightlifting fans were treated to a taste of the action in the super-heavyweight class. A virtually effortless 435-lb Clean and Jerk wrapped up the title for Jacob Stefan, a previously obscure lifter from Seattle. Perhaps not one spectator in twenty at Williamsburg expected Jake to win, as he was simply too big a mystery.

To a few iron game super fans, though, the name Stefan has a ring of familiarity, as he has cropped up on the national scene several times in the past three years. A few powerlift fans might recall 1970, a year in which Stefan placed third at both the Juniors and Seniors in the heavyweight division. His 1700 total that year included a 610 squat and 670 deadlift. During that same year, he totaled 1020 on the Olympic lifts to attain his Mater rating as a heavyweight. His combined 2720 total was worthy of note and possibly not approached by any other heavyweight that year.

By 1971 Jake's Olympic total had climbed to 1075, which was good for an easy super-heavy victory at the Junior Nationals. Jake had to eat and drink very heavily prior to the weigh0in in order to lift as a super-heavy at the Juniors. The following year a broken hand kept his total from advancing as rapidly as expected and his 1080 effort was only high enough for fifth place among heavyweights at the 1972 Seniors. Then, with the Press eliminated from the Olympic lifts, Stefan finished first at super-heavy in the recent Senior Nationals. His 777 total was registered at a bodyweight of only 249 and Stefan was chosen for the World Championships team as a heavyweight.

Like Jon Cole, Stefan is perhaps one of the most athletic heavyweights in the USA. He has recently sprinted 60 yards in an amazing 6.5 seconds while weighing 245 lbs. As a high school athlete his skill at both football and track attracted numerous athletic scholarship offers. These were rejected, however, in favor of weightlifting which Jacob found to be considerably less brutal and more satisfying than football. Still, the sight of a super-strong 245-pounder with 6.5 speed in the sixty yard dash must set pro football scouts to drooling.

Typically, Jake's training is thrice weekly and highly variable. He seldom does the same workout twice, but keeps an accurate record of all his training poundages and attempts to slowly increase the weights over the long haul. Basically, his training is peaked out only once a year for what he considers to be an important meet. Then a week or two layoff is taken and the long process of building up is repeated.

The power lifts that he once concentrated on have been sublimated in favor of those exercises that will improve performance on the two Olympic lifts. Deadlifts and bench presses have been totally abolished from his schedule and 650 lb single squats have given way to sets of 5 with a pause at the bottom or each and a maximum resistance of 550 lbs. On an average, Jacob squats only once a week (usually on Monday or Wednesday), as cleaning and snatching really work his legs hard on the other days. He does front squats "about once a year" as they seem to hurt his wrists.

Stefan usually does some form of pulling and some type of movement to benefit his Jerk during both his Monday and Wednesday sessions. Then on Saturday he usually goes heavy on both the Snatch and Clean and Jerk. Pre-Williamsburg bests were 350 Snatch and 450 Clean and Jerk, but not in the same workout. A typical weekly training schedule would shape up as follows:

Following Jake through a typical workout, one would see him first spend a couple of minutes taping his wrists and then wrapping them for maximum protection from injury. Then he spends ten or fifteen minutes stretching and warming up before the training session. All of this preparation has eliminated injuries from his training. During the past five years only one injury has resulted in lost training time, and that was a broken hand sustained while practicing karate.

Cleans might be the first exercise and he starts low with 135 x 2. Then his series might often go 205x2, 275x2, 325x2, 360x2, 380x2, 400x2, 420x2 and 440x2. All of his pulling in training is reinforced with straps to keep from yanking off patches of skin from the palms of the hands. Jake finds no difficulty in hook gripping his maximum meet poundages, so seldom pulls without straps in training.

A typical second exercise might be jerk drives in which he would do 440x2, 460x2, 480x2 and 500x2 during a particularly heavy session. Jake considers the Jerk to be his weakest link at the present time and is spending plenty of time improving it. He is even experimenting with a slightly wider grip which shows promise of helping his lockout.

Following his workout with the weights, Jake occasionally runs, but usually does this on his off days. Running is usually in the form of three mile cross country runs with gently hills. A few wind sprints tend to give Jake the tired breathless feeling that tells him that his heart and lungs are benefiting from the exercise.

Stefan supplements his training with a positive mental outlook, a protein rich diet and plenty of rest and sleep. So far his formula has paid off, and having watched him train on numerous occasions, the author fully expects a 375 Snatch and a 500 Clean and Jerk from him within the next two or three years.