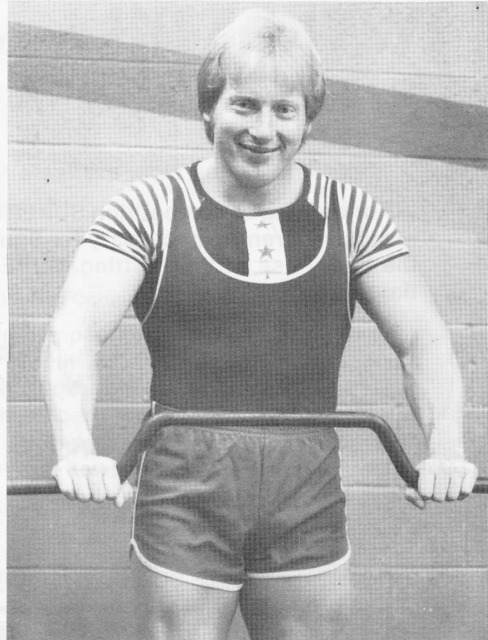 If you need an introduction to Mike MacDonald, I want to ask where the heck you've been the last 13 years . . . that's how long the World's Greatest Bench Presser has been lifting and during that time he's set 12 official World Records and 4 unofficial ones . . . He presently holds the mark at 181, 198, 220, and 242 and he's eager to go for the SHW mark and the 275 lb class as soon as it's recognized internationally. Mike recently benched 603 at 240 for another unofficial mark and was going to go up to 255-260 in bodyweight for a shot at 635 as a SHW, but lack of qualified officials in his area and Christmastime business commitments made him decide otherwise. He's in hard training for another assault on the SHW BP mark this coming spring, though.

"Remember back in 1967 when Pat Casey made that incredible bench press of 615 pounds . . . he was way ahead of his time on the bench and nobody could even come close to him . . . he was phenomenal in upper pectoral power. The most beneficial exercise he did for his bench press was when he took those huge dumbbells and did dumbbell bench presses . . . so he could go deeper than the bar allows. It worked fantastically for him but it was a lot of extra work getting them in position. I will give you an explanation of how I use the same principle as Pat Casey.

You will notice that my bench press has been steadily climbing for many years, but I am basically a very small man and not even medium-boned . . . but small-boned with 6.5" wrists so it took me longer than him to go over 600 officially. I used the Casey principle by doing pushups between chairs with weight piled on my upper back and got that extra stretch which developed the chest, especially the upper pectorals and the tendon and ligament strength. This procedure always had its hangups, because you had to have somebody else to do all that work of loading your back up and unloading it . . . so I quit it for a couple of years. My bench really leveled off and wasn't going up anymore, but I didn't want to mess up anybody else's workout.

I had in mind an idea for a special piece of equipment, but I didn't know if it could be built, until I ran into Warren Tetting in St. Paul, Minnesota who builds the Iron Man equipment. Warren built me a bar with a camber to it, and I went crazy. I did not have this bar built with any other intention in mind but to increase my bench press, but I can't keep secrets very well either and I love to help others any way I can. Now I can just take the bar out of the rack and I don't have to bother anybody else to get that all-important stretch of the pectorals.

I am now very confident that I will exceed 700 eventually. There is no doubt in my mind that I can go that high. Here is the routine I follow twice a week. My biggest worry is overtraining, which can happen easily with all that stretch.

Straight bar first. 135x8/225x5/325x5/445x3/565x3.
All these previous sets are done concentrating on technique and strictness. Then 475x5. I do this one set with a shoulder-width grip and pauses to feel more triceps and front delt work.

Now the cambered bar. 450 x 2 sets of 3 with pauses and wide grip. After this my upper chest feels just fantastically pumped up and that is when I make new gains.

IMPORTANT NOTICE: The two days I bench are not always the same days, because if I can take a broomstick and bring it to the chest and feel a soreness in the pecs or front delts, I will wait another day. The muscles must recuperate first . . . many lifters overtrain and defeat their purpose by working out with sore muscles.

My diet is very complete, but my favorite supplement is dessicated liver tablets of which I sometimes take 160-200 a day before a contest. I feel they work wonders for me. The main thing that I believe in is to have everything going for you at the same time. That means diet, training system, rest, easy job (no physical labor), no mental stress or worry, and there are so many other factors. When you look at my natural potential for bench pressing it is much less than the big men because I have such a small bone structure and can't carry the muscle mass they can. But my persistence has paid off, over a ten year period. I've seen big benchers come and go but it's the one that doesn't give up who will make it, and new knowledge keeps accumulating over time."