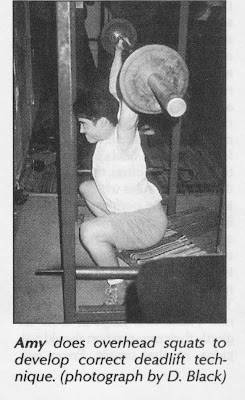 I have been fortunate to have trained some of the greatest women powerlifters of all time. Five of these women have squatted or deadlifted 500 pounds or more. Three have benched well over 300 pounds.

Women are taken for granted and overlooked many times, but the fact remains that women are just as dedicated as men, and sometimes more so. Not much training information is available to them. They are taught the basics, which yields mediocre results. I have trained a group of women who have amassed a total of more than 25 open world titles. Here are some insights into how this was achieved.

First, the women train by percents, just as the men do. In the bench press, they use 55% for 8-10 sets of 3 reps. By doing this, the barbell volume is controlled to prevent over or undertraining. Percent training also develops explosive strength. Women are just as able to develop explosive strength as men, if they train correctly. Percent training will also perfect form.

The same holds true in the squat, only the percentage is different. It ranges from 50 to 60% of their contest best. Squatting is done off a box  that is slightly below parallel. Box squatting is very important for women. It develops tremendous hip strength. Although women seem to have broader hips than male lifters, they lack the muscle mass in  that area. Our women train the deadlift just like the men: they don't deadlift. The only exception is the extra-wide sumo. This is done by placing a set of collars on an empty bar before the weights are added. This will allow for a very wide deadlift, placing tremendous tension on the hips. Sue White went from a 265 to a 468 deadlift in under two years at 148 by doing wide deadlifts every third rotation, or about every nine weeks.

Special exercises play a major role for our women champions. For the deadlift, Amy Weisberger does a lot of front squats on a 6 inch box. Her best is 215 for 3 reps. After doing this in the gym, she pulled an easy 402 after squatting 390, to total 1031 at 123.

She also rotates walking lunges with 50-lb. dumbbells for two or three weeks. She walks up and down a steep grade. Walking downhill works the quads and hips; walking uphill works the the glutes and hips. This is also great for flexibility. For the next two weeks Amy will do static squats. These are done by staying in a squat position with your back against a wall at two or  three positions above parallel for 3-5 sets of 30 seconds each. Hold dumbbells, as heavy as possible.

For the third rotation on deadlift day, one-legged squats are done: place the back leg on a box that is 12-20 inches high with the front leg as far from the box as possible. After you can do 15 reps for a couple of sets, start adding weight with dumbbells.

Of course, reverse hypers are done 4 times a week, lat work 3 times a week, and lots of ab work. Amy uses all types of special exercises to raise her work capacity, which increases her deadlift.

Vanessa Schwenker has been with us for only 18 months, yet has raised her total from 795 at her first meet to 1123 at 132. Her bench press has gone from 180 to 253 also. How did she do this? At present, she trains the bench on percent day with 135 for 10 sets. All sets are done with the hands inside the power ring, first with the little finger touching the ring, then moving closer by 2 inches, and then with the index finger on the smooth part of the bar. These lifts are not intended to build absolute strength, but rather explosive, or starting strength as well as accelerating strength. It is one thing to be strong, but another to display it.

After benches, Vanessa does triceps extensions with a barbell to the throat or forehead or with dumbbells, palms facing in, on the floor or on a bench. When doing extensions on the floor, the bar or dumbbells is/are rested on the floor on each rep to break the eccentric/concentric chain. This builds explosive strength in the triceps. Next are dumbbell power cleans while seated or inverted flyes. Either one will build the forearms, upper back, and rear and side delts at the same time. Then it's on to 4-5 sets of lats and some hammer curls.

The percent work is done on Sunday. The second day is Wednesday; this is where the heavy weights come in. It is known as the maximum effort day. Vanessa will do board press for 2 or 3 weeks. Then she will switch to floor press for the next 2 or 3 weeks. After that, she will do rack lockouts with a close grip, never moving the bar more than 9 inches or less than 5 inches to lockout.

She will sometimes do steep inclines with a close grip or dumbbell floor press for a rep record at a certain weight. When a dumbbell record is attempted, it is very important to go to complete failure. This type of training is very taxing and can be done for only 2 or 3 weeks. It takes a tremendous amount of energy to do this type of training. Incidentally, it is known as the repetition method.

Exercises that are done after the main exercise on maximum effort day are similar to those done on dynamic, or percent day: triceps extensions, upper back work, lat work, some side delt and front delt raises, and a few hammer curls.

Vanessa is just starting to reach her potential.

After box squatting, she will do arched back good mornings, 3-5 sets of 5 reps. The weight ranges from 135 to 205. Then walking lunges, static squats, or one-leg squats are performed. Doris will pick one of these exercises and do it for 2 weeks before switching to a different exercise. She warms up with calf/ham/glute raises before squatting and after squatting does reverse hypers, lots of abs, and more calf/ham/glute raises.

On maximum effort day, Doris will do several types of squats, such as safety squat bar, Manta Ray, belt squats, or front squats, all on any one of six different height boxes. These are rotated every 2 weeks with one of five different forms of good mornings. Sometimes she does a max rack deadlift or a max half-squat off pins. After a major barbell exercise, Doris will again do reverse hypers, calf/ham/glute raises, abs, and some type of leg work. Sometimes she will do light deadlifts 4 times a week with 135-185 for 2 sets of 20 reps.

This type of training has helped Doris make the all-time total record of 887 at 105.

Dave Tate asked me if I could help his wife, Traci, with her bad back. When Traci came to Westside, she could not pick up the bar without pain. We had our hands full. Traci did some stretching and ab work. Her lower back was extremely weak, so reverse hypers were done 4 times a week, along with 12 minutes of ab work each day.

It wasn't long until Traci was able to start squatting and doing several back exercises, such as lat pulldowns, chest-supported rows, back raises, and walking lunges, first with no weight and then with light weight. Once she became physically fit, she started doing the same squat and deadlift training as the others at Westside, only scaled down as far as sets go.

Her first full meet was a disaster. She injured her right knee in the squat, the result of an old injury. She was unable to finish the meet, but she did bench 180. More determined than ever, Traci started training as soon as her knee would allow.

At Billy Master's Northcoast APF Open, Traci totaled 785 at 123, an Elite total. Next at the 1996 APF Nationals in Atlanta she totaled 821 at 123, not bad for someone who couldn't lift an Olympic bar without pain one year earlier. By raising Traci's work capacity and perfecting her form, she accomplished a great deal in a short amount of time.

As  that famous philosopher Mick Jagger said, "Time waits for no one," so let's get going, girls, and show the guys. But most of all . . . show yourself that anything is possible if you try.