Recovering with the Weight - David Webster 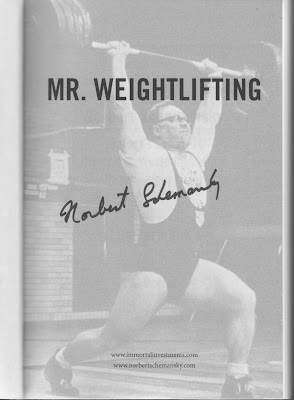 Asked about the weights today, Schemansky gave it a few seconds thought, then twirled a finger around his temple. Crazy. Lifting became an opiate.

In the snatch the recovery presents no difficulty for splitters and little difficulty for squatters unless they have very tight shoulders. Splitters are advised to recover by extending the legs and thrusting on the front leg to move the foot back and then bringing the rear foot forwards to place the feet in line for the referee's signal.

In squat snatching the weight must be kept settled back safely to prevent it going forwards and out of control as the hips are raised; it is for this reason that good shoulder mobility is essential. Avoid raising the hips much faster than the shoulders otherwise you will find a tendency to 'dislocate' by rotation of the shoulder which will cause you to lose the weight backwards.

In both styles the recovery should be affected without delay. As soon as the weight is correctly received the legs are straightened, taking advantage of any rebound.

In the clean it must be admitted that the splitters have (or had) an easier time in the recovery phase. Very seldom have splitters failed to stand up with a weight they have pulled in. The favorable mechanics allow the splitter to overcome inertia by pushing on the front foot in a backward and upward direction. With the weight moving upwards towards the center or a very wide front-to-back base the back leg acts as a pivot and lever, making the front foot recovery comparatively simple. This is followed by a small step forward as described for the snatch.

In the squat clean the situation is very different.

The weight is often pulled in very well but the lifter cannot stand up with it, being unable to straighten his legs. The 'sticking point' is well known and all sorts of maneuvers are used to combat this. First let me say that you must at all costs avoid stopping at the sticking point, for once the weight stops its upward journey, failure is almost certain. Bouncing several times as some lifters do to gain momentum is very hard on the knee joints, but catching the weight on the bounce and profiting by the rebound of thigh on calf is a legitimate and valid device which can and should be used.

Many lifters who settle in the low position begin their recovery by tipping the hips backwards and upwards and then drive strongly with the legs. Those who employ this style must be very careful that they keep the elbows well up or else the weight will be lost forward.

Yet another method is to drive strongly upwards and as the hardest point is reached the hips are tipped backwards with little, if any, forward displacement of the bar. This device increases the angle between the bones of the upper leg and those of the lower leg thus overcoming the infamous sticking point. Having done this, however, the lifter must readjust his balance forcing head and shoulders upwards and hips forward and upwards.

While some shifting of balance is often permissable, and often advantageous in the recovery, excessive rounding of the back or other unorthodox movements will bring a danger of injury.

It is not unusual to see lifters trying to get through the sticking point by forcing their knees inwards at the crucial stage, but this is extremely wearing on the knees and should be discouraged. I much prefer a straightforward 'power' recovery and advise lifters to practice front squats using exactly the same foot spacing and hand positions as they do in the clean, duplicating the position as closely as possible.  However, if adjustments have to be made, these should be kept to the minimum and re-adjustment made as quickly as possible. Obviously, economy of effort in the recovery is of prime importance because the lift is far from finished. It must still be jerked overhead and a difficult clean is psychologically bad. Aim at easy cleans and a good recovery but train yourself to accept difficulties in the early stages. You should be confident that if you can get the weight to thet chest you will be able to ram it overhead in good style.

As you reach the final upright position make sure you have the bar in a good position from which to jerk from the shoulders.

We have now covered the all-important techniques for the snatch and for the clean, considering the split style and the squat style. The recovery in the snatch and the clean have also been reviewed and now our attention is turned to the second part of the clean and jerk - the jerk itself. In this we will ignore variations of no-split and half-split techniques which have from time to time appeared on the scene. These have little significance in a book aimed at showing the way to maximize performance. We will deal only with the orthodox split technique which is the best and quickest way to success.