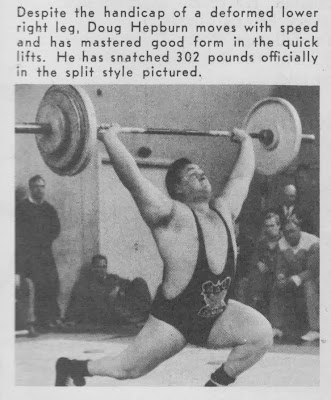 "If a man's temperament is suited to it, I believe he will make better success in weightlifting by training for strength primarily and style secondarily than if he puts great emphasis on learning form," says 1953 World Heavyweight Lifting Champion Doug Hepburn. The giant Canadian's own rise to international fame indicates that his theory has paid off, and he also bases his conclusion on the career of U.S.A. heavyweight Paul Anderson.

Hepburn is today without peer in pressing heavy weights overhead and his Olympic total of 1,040 pounds ranks among the five best aggregates on record. To attain the eminence at which he is a leading contender for the mythical title World's Strongest Man, Doug Hepburn has had to overcome the handicap of a deformed right calf and foot. That he has risen above his handicap makes his performances on the standard competition lifts especially commendable and is mute testimony to his courage and determination.

In his training routines, Canada's modern Cyr varies his workouts according to his immediate goal. Heavy squatting has always been a favorite exercise with him and is almost invariably a part of his training. Regular readers will remember that Doug originally gained prominence for becoming the first man to squat with 600 pounds. 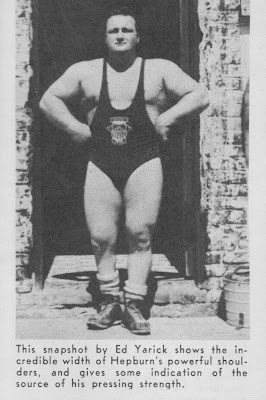 To give readers an idea of how the 1953 world champion and 1954 British Empire Games heavyweight winner prepares for a regulation contest, an outline of his training prior to the '53 meet in Stockholm follows:

Press on bench.
Same as Monday.

Entire workout the same as Monday.

Note the limited number of exercises used, and that they were practiced in low repetitions for several sets. Doug lifted a  total of 20 cleans or 22 snatches in a single training period. He limited his squats to a total of 23 and his bench presses to 17. It is interesting to learn that he relied on bench pressing to keep up his pressing power during this period. His press so far exceeded his clean that it was necessary for him to emphasize pulling movements in his pre-contest training. His official lifts at the championships were: 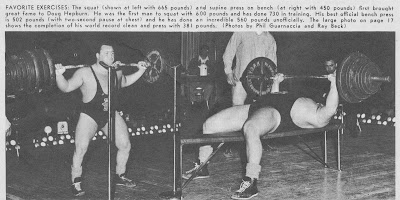 In preparing for the bench press and squat championships sponsored by Ed Yarick a year ago, Doug worked on the two lifts to be contested. He sometimes trained on both exercises the same day, and sometimes practiced them on alternate days. The poundages and repetitions he used were as follows: 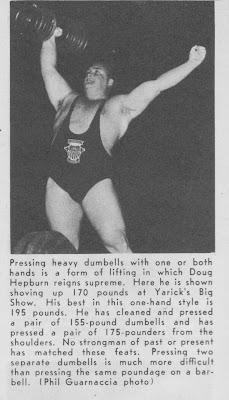 At the Yarick Big Show Doug also pressed a pair of 157-lb. dumbbells overhead after they were handed to him at the shoulders. He made little formal preparation for this, but when he did his dumbbell pressing he worked one arm at a time in sets of 2 or 3 repetitions, working as high as possible in poundage. At the contest he officially bench pressed 450 and squatted with 665.

A list of Doug's best official and unofficial strength feats indicates superhuman all-around power, and a clear-cut superiority over every other iron game great of past or present in pressing and pushing heavy weights overhead:

Prior to the British Empire Games at which he lifted 370 press, 300 snatch, and 370 clean and jerk for 1,040 total, Doug placed great emphasis on heavy pulls to waist height and attempted to learn the squat clean and squat snatch. In the pulls he copied the Paul Anderson method of strapping his hands to the bar and worked up to the point of pulling 500 pounds waist high for a single. During one training session in which he warmed up and just worked to his limit in the squat snatch, Doug succeeded with 320 pounds. Although unofficial, this is one of the best snatch lifts ever made. It is 18 pounds more than he has been able to lift in the split style. At the tryouts for the British Empire Games, however, (May 8, 1954;  the occasion of Doug's world record 381 clean and press), he found the squat style uncertain and was only able to snatch 270 pounds. With this weight he depended almost entirely on pull, using very little knee dip to get under the bar. Because he felt unsure of  the squat style, he returned to the split for the Empire Games in Vancouver. Incidentally, Doug used the squat clean for his 381 press at the tryout meet. It is quite possible that Doug might have scored more than 1,040 total if he had used the squat style clean and snatch, or if he had practice the split style more extensively before the Vancouver lifting.

Doug has two ambitions in weighting, to clean and press 400 pounds, and to jerk (push) 500 pounds overhead without moving his feet. He has already shoved 490 to arms' length overhead. It is possible, however, that if Doug retains his interest and  reaches these goals they may be claimed as professional marks instead of amateur records. Having won major amateur championships, including the world title, Doug may decide to capitalize on his fame and become a professional athlete. Being rugged as well as strong, he has considered entering professional wrestling or Canadian football.

Whatever his future may be, Doug Hepburn deserves to be ranked in the all-time iron game hall of fame for his record-breaking strength feats. He also rates great credit for his courageous uphill march to physical success while faced with a handicap which would have prevented weaker men from even trying, much less succeeding.