The Growth Program, Then and Now - Frank Zane 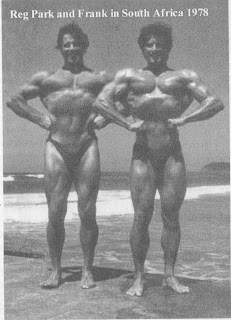 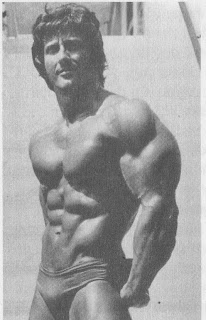 I used this workout plan when training for Mr. Olympia and it was very successful for adding muscle mass during those years that I was at my best, between 1976 through 1983. First, I'll explain how I used the workout then. Following that, I'll show what changes I would make to the routine could I replay that whole period.

How I Did It Then

This routine helped me grow because I incorporated one (modified) power lifting movement into each workout. On day one it was the wide grip deadlift using straps (regular grip). I'd start my back workout with 6 sets of wide grip deadlifts, the first three from the floor - 15, 12, 10. Then I'd elevate the barbell so the plates would sit on boxes a foot high, or I'd use a power rack - 10, 10, 8, and sometimes a set of 6 if I felt up for it. I'd do plenty of stretching with the two-arm lat stretch between sets and take my time before venturing into the next set. My upper back, traps, and spinal erectors got much thicker doing this and my back got wider.

Next came T-Bar rows - 12, 10, 8, of course increasing the weight each set, and doing the two-arm lat stretch between sets. This is a great size-builder for the low central lats. My favorite way of doing it became using a 7-foot Olympic bar with one end in a corner, small diameter plates on the other end and using an interlocking finger grip right behind the collar. My upper body would follow the weight downward, stretching low to the floor and the plates would touch my ribcage at the top of the rep.

A favorite routine of mine was to start with one arm dumbbell concentration curls, 3 x 8-10 each arm using more weight each set. I would very deliberately hold the dumbbell for one second at the top of the curl and squeeze the biceps for peak contraction, and then start lowering the dumbbell very slowly.

Alternate dumbbell curls came next, 3 x 8-10, increasing the weight each set. Each dumbbell would travel down and up and down completely before I curled the other dumbbell. Each negative would begin very slowly and I would pronate the dumbbell (turn it inward) on the way down.

Finally, 45-degree incline dumbbell curls, with lighter dumbbells, 12, 10, 8. I did a great deal of dumbbell work for biceps in those days, because it was the best. You can curl and supinate at the top of the movement with dumbbells.

After a total of nine sets for biceps, I'd tackle forearms with barbell reverse curls, 12 reps super-setted with seated barbell wrist curls, 20 reps. Two super sets. After each set of curls and forearm exercises I held the pronated arms back stretch for 15 seconds. This gave me a total of 15 sets for back, 9 for biceps, and 4 for forearms, adding up to 28 total sets in the workout, which proved to be enough for growth.

Because of the heavy deadlifts, I preferred to take the next day off from training because squatting was my main movement. Not a good idea squatting with a sore lower back. So, after the rest day I started my leg routine with a few sets of one-legged top extensions to get some blood in the knees, and then started my 6 sets of barbell squats - 15, 12, 11, 10, 9, 8. I did below parallel squats doing slower negatives than positives.

Next exercise was the leg press - 15, 12, 10. Leg presses always felt light after heavy squats and I did higher reps to get an overall pump in the thighs. I never went extremely heavy in this one, but concentrated on going deep into the negative and then not quite locking out at the end of the rep. This it was lying leg curls - 12, 11, 10, followed by the one leg up stretch between sets.

Ab work ended the leg day routine, which was usually anything except hanging knee ups in order to give the upper body a rest.

My main exercise on day three's program was the barbell bench press, with a shoulder width grip to put more emphasis on pecs, front delts and triceps. I didn't quite lock out at the top, and did doorway stretches between sets - 12, 10, 8, 6, 4, 2. These were all done with slow negatives. After I finished the bench presses I did 70-degree incline dumbbell presses - 10 reps, drop angle for 8 reps, drop angle for 6 reps, drop angle for 4-6 reps. All with slow negatives, not quite locking out at the top of each rep. By now my pecs and front delts were really pumped and I'd keep doing doorway stretches between sets.

Next came 10-degree decline dumbbell flies for 12, 10, 8, doing the doorway stretches and flexing the pecs between sets. Then it was the dumbbell pullover lying across a bench, mainly for serratus.

It also expanded my ribcage, pumped up my lower pecs, and really developed the posterior head of my triceps. I got quite strong on this one and did 12, 10, and 8, doing the one arm overhead shoulder stretch between sets.

Next, I moved on to triceps and started with close grip bench presses with hands about 12 inches apart, elbows pointed out to emphasize outer triceps, lowering the weight to the chest slowly and not quite locking out at the top. 12, 10, 8, arms back stretch between sets.

One arm overhead extensions came next. I'd hold onto a support and lean slightly backwards, making sure to let the weight down deeply behind my back and then, keeping my upper arm close to my head, not quite lock out at the top of the exercise. 12, 10, 8, holding one arm shoulder stretch for 15 seconds with each arm between sets.

My final exercise for triceps was the V-grip pressdown, holding the contraction for a full second each rep. 12, 10, 8, doing arms back stretch between sets. After triceps work I was ready to finish off deltoids. I already worked the front delts with the pressing, so all that was left now was an exercise for rear delts and something for the side or lateral heads. Bent over dumbbell lateral raise was my preferred exercise in those days. I'd bet behind a T bar or leg roller on a leg curl machine and lean as far forward as I could, grab not-so-heavy dumbbells and do 15, 12, and 10 with rear delt stretches between each set. My last exercise for delts was the side cable raise - 12, 10, 8. Sometimes I'd do 3 x 12 nonstop arm-to-arm.

Ab work was always at the end of my workout and my plan was to gradually increase the total amount of reps right up until contest time until I was doing 1,000 total reps at each workout. Often I came back to the gym later in the afternoon to do this and it usually took me a half hour of nonstop ab exercises to complete it. The minimum program was leg raise 4x25 superset with ab crunches 4x25, followed by 100 seated twists. As I progressed in my ab work I'd add to this 4 sets of 25 hanging knee ups superset with 4 sets of 25 two-arm overhead cable crunches followed by 100 more seated twists. After that I'd ride a stationary bike for 15-20 minutes or run a slow mile and a half.

How I'd Do It Now

If you refer to my book, Workouts From Personal Training Diaries, you will find over 180 different workouts I did over a 40-year period of time. Variations of the above routine will be found in there as well.

Paperback edition sold out, available only in Kindle or Nook
http://www.amazon.com/The-Workouts-Personal-Training-ebook/dp/B008BMOYCE/
http://www.barnesandnoble.com/w/the-workouts-frank-zane/1111567032?ean=2940014798129

In general, I'd go to the gym with a routine in mind but as I trained, I made slight variations in it, like changing the order of the exercises, or substituting a new movement. Nothing drastic, but no two workouts, although similar, were ever exactly the same. I used the Growth Routine in my training for the 1979 Mr. Olympia and something similar for the 1982 Mr. Olympia competition as well. I did a 4 day cycle, training 3 days out of 4, three days in a row and resting the fourth day. I was hard and I got really sore from it. I needed lots of rest and noticed a tendency to become overtrained after about a month on this 4 day cycle so I took a few extra days off every month.

If I were to do that again, I'd do a 5,5,5,6 day cycle (train 3 days out of 5 three times in a row, then train 3 days out of 6 once; repeat). This is something I recently thought up and I like the idea because it forms a 3 week cycle and gives enough rest so you can grow. When I did 3 days on, 1 day off, (i.e. the 4 day cycle) I was tired a lot and usually became overtrained after about one month of this kind of torture. But with this new cycle overtraining has less of a chance of occurring. You'll get more rest between workouts, be stronger and grow more. Here's how it repeats itself every 3 weeks. Remember that Day 1 is back, biceps, forearms; Day 2 legs; and Day 3 chest, shoulders, triceps. R means rest day.

And then the cycle repeats itself exactly in the pattern every three weeks providing you don't miss. So, every 3 weeks you train each workout 4 times, you have 9 rest days and 12 workout days. Notice you always have Fridays off. And you can always have the same day off depending on when you start the cycle. Start in on Monday and every Friday off. Start on Tuesday and get every Saturday off. Start it on Wednesday and get every Sunday off, etc.

1) Since you divide your body into three sections instead of two you can do more work for each section. You have longer to recuperate between each time you work a specific part of the body.

2) It's easier to tolerate only a small part of your body being sore from exercising instead of your entire body or entire upper body being wiped out.