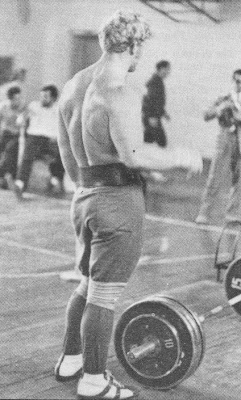 Intense Mental Concentration:
A Must for Best Gains
by George Coates (1974)

Everyone calls him Cheerful Charlie. A very appropriate name it is, as this guy is a laugh a minute. Most of the fellows at the gym agree that Charlie is the greatest tonic for the blues they have ever met. It doesn't seem to matter who comes into the gym, good old Charlie has something to say that makes them laugh and feel good. Funny thing, though. Charlie has been working out for almost five years now and he still looks about the same as he did when he started, isn't much stronger. The guy never misses a workout either and he must spend more time in the gym than any two people I know. Because most people enjoy Charlie's clowning around and constant joking, he has actually become a good amateur entertainer rather than a well-developed lifter, which is really what he first set out to be.

Sure, Charlie trains, when he's not joking about and laughing, that is. He even goes through the motions of a workout between bull-sessions. Just look at him now, curling that 40-pound barbell (after five years of training) and telling Jim some joke about an Irishman in a bar at the same time. The trouble with Charlie is that he never realized that to succeed at bodybuilding and lifting it takes a combination of many things, one of the most important being applied Mental Concentration. Charlie. Perhaps we have a little of him in our own make-up and that is exactly why I am writing this article.

If you have ever seen a top-line physique champion train, you would be quick to observe that one of the most important factors in successful bodybuilding is indeed the power of full mental concentration. The secret (well, one of the secrets) of all bodybuilding and lifting champs is the ability to combine physical and mental power. It follows then that extreme mental concentration is a must for the bodybuilder who wishes to climb to the top.

Bodybuilders could certainly learn a lot with regard to the mental aspect of training by observing champions weightlifters. A most powerful sense of mental concentration used in conjunction with with physical strength and skill is perfectly displayed when a weightlifter forces everything from his mind but the lifting of that bar. Some of these men appear to be in a hypnotic trance -- so deep is their concentration. And it works!

Now, I'm not suggesting that the bodybuilder or lifter should walk around through his workout like a zombie. But I will say this. By concentrating hard on each rep of every set results will come faster, and believe me nothing keeps the training enthusiasm high like visible RESULTS. I truly believe that the man who adopts a random attitude towards his workout may just as well stay at home and practice calisthenics. We should keep in mind at all times that proper mental attitude and physical response cannot be separated as far as the bodybuilder is concerned. From the very start of your workout until the last rep of the last exercise has been squeezed out, you must not allow your mind to wander. If you have training partners encourage each other during the workout and never engage in heated arguments or distracting discussions of any kind. If you must talk about last night's TV thriller, wait until you are finished the workout. It is of extreme importance that you get into the habit of being able to concentrate completely on the work at hand. Before you make up your mind that you WILL complete the desired amount of reps and that nothing short of an atomic bomb will distract you. Fight mentally as well as physically to reach your goal. I remember seeing Reg Park performing heavy barbell curls a few years ago and it looked like he was going to bend the bar, so strongly did he grip
and vigorously attack it. That's the kind of physical exertion and mental concentration most of the big names are able to turn on and display.

The advanced bodybuilder in particular should attempt to psych himself up at odd moments during the day of his workout. By mentally conditioning himself the advanced man can arrive at the gym full of drive and determination and with such an attitude he cannot fail. In fact, it is my opinion that the ultimate success or failure of a bodybuilder's efforts to reach his goals depend very, very much on what goes on in his mind. While I agree that some people are born with more favorable potential than others, EVERYONE without exception can obtain their own personal maximum in strength and development through correct training methods carried out consistently over time. Correct training methods, of course, must include the proper mental attitude. So, why not give it a try? Chances are, if you are training regularly, eating and sleeping well yet still not chalking up gains, the fault probably lies within your mental self. Remember, there is no easy way. You must give it all you have mentally as well as physically. Be determined, and above all endeavor to use your full powers of mental concentration to make your workouts more productive.