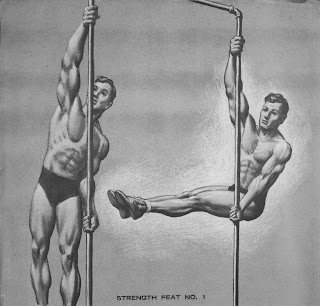 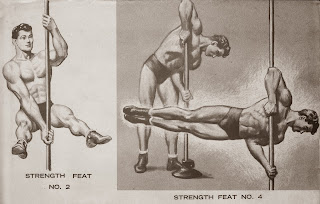 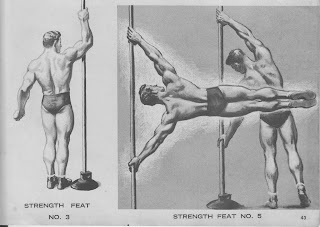 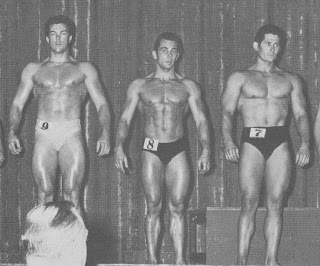 
There is no doubt that big muscles - symmetrically developed - command the attention and respect of all people. But even more so than the male physique itself, muscular strength holds first place in bewildering people the world over!

Strongmen are comparatively rare today - in an age when people are fascinated by man's ability to command machinery to do his work - but, whenever and wherever one appears, spectators never fail to pack the arena in hopes of seeing a memorable show of muscular might.

The bodybuilder can't help but command the attention of everyone at the beach - and although this attention is his to command - the occasional strongman - regardless of what type physique he possesses - who shows up to amaze onlookers with a few feats of strength, commands even more attention - even it if lasts no longer than his act (and less than this sentence), when all eyes are turned, once again, towards MIGHTY MUSCLES!

Now, if might, well-proportioned muscles were also trained to perform feats of strength, attention would be unanimous in the direction of the all-around bodybuilder/strongman. As bodybuilders you can make your muscles serve you to the full by training them to perform feats of strength - and, at the same time, have some fun, challenge your own ability to accomplish such feats, and amaze all onlookers with both your muscles AND your might!

Here are some stunts that you should be able to perform once you spend some time perfecting them. Difficult to do, they'll challenge your ability and impress all your friends - who will attempt them and inevitably fail. These stunts will tax all your strength, and, if you perform them five or 10 times each, you can be sure that you possess a mighty frame!

The short fellow, it seems, has a great advantage over the tall fellow in most of these feats - because the longer the legs, body, and arms the greater the bodily leverage; hence, more strength is required to overcome this leverage.

In these exercises a strong pole or iron pipe will serve the purpose. The best diameter sizes are from 1.5 inches to 2 inches; the pipe or pole should be securely fastened at the top and bottom.

This is the easiest of the lot. Generally speaking, the stronger of your two arms is the one that takes the lower grip position, as shown. You can soon determine which hand position suits you best by trying both - first the left up and right down, and then the right up and left down. There should be a moderate or comfortable distance between the hands.

Now, straighten both arms rigidly, and by pulling down or hanging with the upper hand and pushing upward with the lower hand you raise your straightened legs up at right angles to the upper body.

Holding that position for a few seconds is a pretty good feat of strength for the average fellow. To make this an exercise (which you will find more difficult), lower the feet to the floor until they just touch; then raise back to the right angle position, and repeat as many repetitions as your strength will allow. If you rest the arms and upper body the least bit when the feet touch the floor you are not doing it correctly.

This feat or exercise (as the case may be) is great for the entire upper body, arms, and front of the thighs. Remember to change hands and exercise both sides equally.

A variation of the above is to straddle the pole as illustrated. The only other difference between the above feat and this is that the upper body is bent, elbow down. A strong bodybuilder can remain in this position for quite a time without apparent strain.

This is sort of a one-arm chin, but it demands a better grip than chinning from a horizontal bar. You can see that the hand in this position will easily slide down the pipe when the weight of the entire body is lifted off the floor with this one arm.

In doing this one, you grasp the pole high enough above your head so that the elbow will be slightly above the level of the same shoulder. This allows you to raise the feet clear off the floor when you raise your body to the point where the shoulder is level with the elbow.

If you haven't the strength to pull the body up these few inches, then you can jump up and hold yourself at that height. See how long you can retain this suspended position, hanging by the strength of one bent arm without undue strain. You can swing around the pole in this feat while you are supporting your body with the one arm, as in the previously mentioned feat.

As an exercise this is very strenuous for everyone except the very few who can chin several times one-handed. The difficulty is largely due to the position of the hand and the wrist, and the slipping tendency of the hand when in this position.

As an exercise, raise your body as high as possible and lower as many times as you can. If you must jump (and most fellows will have to), do so, but let the body come down as slowly as possible until the feet touch the floor. Use as much arm strength and as little jump as you can to get you up. This will greatly strengthen the back, shoulders, and arm muscles.

This is a simple "flag." The flag proper, as you know, is done with the arms straight at the elbows. This position cuts short cuts short the length of leverage and gives stronger arm support, consequently making it easier to keep the body and legs out in the air at right angles to the pole.

You will notice that the elbow of the lower arm supports part of the weight. The weight is supported mostly by the bone strength of the forearm. Of course, the strength of the grip of this lower hand is important.

The upper arm is in a very strong position with the elbow, forearm, and hand against the pole.

This is the most difficult of the lot. Grip the pole by placing the upper hand on it so that the back of it faces out, and the lower hand is turned so that the back of it faces the opposite direction. The farther the hands are apart, the easier the feat becomes. Be sure that the flat of your back is parallel with the pole - as you assume the "flag" position. The hips must be in the same relation to the pole.

The shorter you are, the better you will be able to perform the "low" flag.

As an exercise, the Flag is a honey! It is rarely used for exercising purposes, and the reason is obvious. However, those who are looking for something real strenuous for the arms, shoulders and upper body should try the Flag as an exercise.

The movement of the exercise is the raising of the feet, legs, and hips to the right-angle position with the bar, and then slowly lowering back. Don't rest at high point nor at the low point.

Yes, these feats are fun to do, they'll challenge your ability, tax your strength, help mold your muscles, and amaze your friends. and you can be sure that you're strong if you can do these!