The ideal physical shape for a bodybuilder is what's called the "X-frame" - that is, wide shoulders, wide lats, small waist and hips, flaring sweep on the thighs and diamond-shaped calves, with proportionately developed arms and torso that are hard and muscular. It is this type of physique that, as Webster's dictionary states, "delights the senses and exalts the mind." Any bodybuilder who has an X-frame physique just looks right to the eye . . . right and beautiful.

Even someone with an untrained eye and with no prior knowledge of bodybuilding can go to his first physique contest and notice immediately that some bodies look more "right" and "beautiful" than others. Why? Shape and symmetry. You don't need 20 years experience in bodybuilding to realize that anyone with a thick, blocky physique who has narrow shoulders and a wide waist and hips, combined with lousy shape and poor symmetry, does not look "right" or "beautiful" to the eye. Such physiques are not beautiful - maybe visually impressive in their own right, but not beautiful. Somehow they offend the eye and the senses. Examples of bodybuilders who look "right" and "beautiful" are Steve Reeves and Francis Benfatto.

Two examples of bodybuilders who do not look "right," even when they are in hard muscular condition, are Benny Podda and Tim Belknap, because they lack V-taper and are too thick, blocky and shapeless. 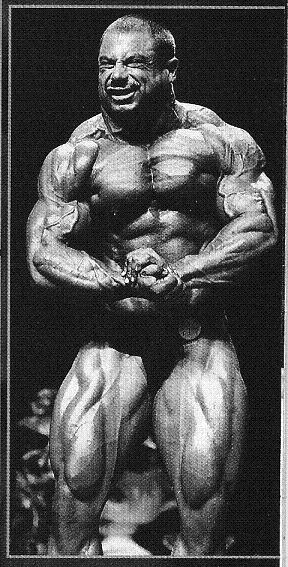 They get by on their incredible mass and muscularity and have fantastic individual bodyparts, but the overall package is missing. Obviously, I say this with no malice toward or disrespect for these bodybuilders. I'm merely pointing out the differences in physique types.

Of course, many will argue that shape is entirely due to genetics and, if you do not possess the wide shoulders and small waist of Steve Reeves, there is nothing that can be done about it. There is, though, and I'll get to that shortly, but first I'd like to make a point that many will not understand and many will not agree with. I know it will be unpopular . . . but here it is.

Those athletes with the best genetics for bodybuilding (those possessing ideal X-frames) not only will win more shows than their less fortunate peers, but they should win. There ought to be no debate about this. If an X-frame bodybuilder goes against a thick, blocky type in a bodybuilding contest, and both are in the same muscular condition, the X-frame bodybuilder should win every time. End of story. No ifs, ands, or buts. And if a bodybuilder with a moderate X-frame goes against a bodybuilder with a super-exaggerated X-frame, everything else being equal, it's all over but the crying for the moderate X-frame.

No, you can't play center in the NBA if you're five feet tall. You can't play defensive end in the NFL if you're built like Woody Allen. Too bad. That's just the way it is. Whining, complaining and moaning about it won't change anything. And in the same way you can't do well in bodybuilding with bad genetics. I agree, it's not fair, but that's life in the big city.

What does it mean to be a bodybuilder? In many ways it's unfortunate that bodybuilding is called body-building. The word itself has a negative connotation to the general public and mainstream press for one thing, and for another, too many take it to literally mean they're supposed to build their body as big as they can and make each muscle as large as they can. That's a sure way to destroy shape. Frank Zane, three-time Mr. Olympia winner and possessor of one of the most beautiful and aesthetically pleasing physiques of all time, wrote: "Just as the sculptor uses hammer and chisel to form his creations out of solid stone, the bodybuilder uses barbells and dumbbells to shape his own body. The type of exercise he does will determine the type of physique he will develop."

Creating a work of art and a beautiful physique means having a critical eye as to where you are building muscle on your body. It means trying to eliminate weak points and constantly monitor your development to keep everything in visual proportion so that no one muscle stands out or overpowers your physique. It means training for shape as much as for size. Zane also wrote: "Shape means everything to a bodybuilder. Anyone can get size and cuts if he follows and special training program consistently over enough time. Muscle shape is much harder to come by. It's muscle shape that gives a physique its personal identity and distinguishes it from the development of others."

As long as you keep in mind that bodybuilding is not about simply trying to get as big as you can, but about trying to build the most perfect body, you're still on the right track. You have to put some thought into which exercises you do, why you do them, and where you're building muscle. This is teh only way to control your development and design the body you desire. Here are some basic rules to follow for training to build symmetry and improve body shape:

2.) Do not train all muscle groups equally hard or with the same number of sets. This is a corollary of rule number one. Do more work for the weak muscles, less for the strong ones. Remember, not all muscles respond equally to training and not all exercises are equal in terms of promoting muscle growth. For instance, bench presses build lower and middle pectorals too well for some people, leaving the smaller and less developed upper pecs to fend for themselves. As much as we would like them to, incline presses and incline flyes do not build upper pecs as well as bench presses develop the middle and lower pecs. Obviously then, it will be necessary to do more sets and harder work to create an equal amount of growth in the upper pecs.

Likewise hack squats, sissy squats and leg extensions do not build lower thighs as well as squats build the upper thigh, so you have to be careful not to overdevelop the upper thighs by squatting too much. Of course, you constantly strive for more and more mass, especially for your first five or so years of of bodybuilding. But after you have acquired some basic mass in each muscle group it may be that you only have to do a few heavy sets with basic exercises to maintain that mass, and many sets of specific isolation exercises to build up some small muscles or highlight some aspects of a muscle - e.g., the outer head of the triceps, the side head of the deltoids, the lower thighs, lower biceps, and the upper and outer pecs.

3.) Never try to develop all muscles equally or to build all muscles to their maximum size potential. Some muscles grow too fast and easily, especially the lower pecs, front delts, upper thighs, hips, glutes. obliques and traps. Their ultimate growth should be kept in check for the sake of symmetry. On the other hand, smaller muscle groups like the calves, abs, serratus, intercostals, side and rear deltoids, forearms, lower biceps, lateral head of the triceps, leg biceps. spinal erectors, upper pecs, lats, rhomboids, teres minor and major, and other small muscles of the upper back can and should be trained for maximum size and development. It's pretty hard to overdevelop these muscles. For the sake of simplicity, let's call them muscle groups one and two, respectively. If you try to develop all your muscles equally, the muscles of muscle group one will overpower the muscles of muscle group two and make good symmetry, balance and proportions an impossibility, besides ruining your aesthetics and shape.

NEXT: CREATING AN ILLUSION.