How Much Ya Bench? - Taylor Wilson 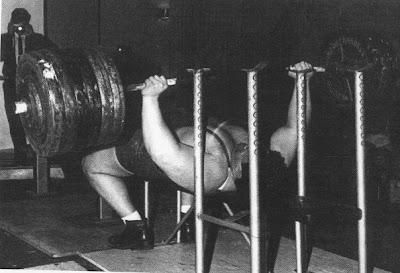 
When I was younger, I spent a lot of time trying to figure out if I should consider myself a good squatter and deadlifter, or a terrible bench presser. I wasn't sure which was the better way to look at it. One thing was for certain, though, my bench press wasn't where it should have been. At one time I was capable of squatting 700, deadlifting 675, and could bench only slightly over bodyweight. My arms are a bit long, but I've also got a thick chest and was carrying a ton of bodyweight at the time, there was no good excuse for my awful bench press.

All of that changed during one magical summer when I put 90lbs or so on my bench press.

The first thing that really got me thinking about what I needed to do with my bench press training was realizing all the material I was reading online wasn't appropriate for me. I lift raw, and at the time, like 2003-2004, all the info I was finding was for people benching in gear of various sorts. While the "sit back" style of squatting normally associated with suits works well for me, obviously the same sort of carryover wasn't working for my bench. I thought to myself  "I gotta find out how guys trained their bench presses before bench shirts". So I started reading about Pat Casey, Jim Williams, I bought a book called "The Bench Press" that Ironmind sold, that chronicled the training of various benchers who lifted either raw, or in very early gear when the training was still more applicable for raw lifters.

I was really surprised by what I saw. Lots of reps, more frequency than I thought to be a good idea, and in a lot of cases, a great deal of bodybuilding, high rep kinda stuff. One thing I noticed in routine after routine were high rep tricep pushdowns, for example. I would have had a good laugh at that "bullshit" in the past, but my bench really sucked, so there I was going to the nearest sporting goods store for a tricep rope to go on my pulley set-up.

I decided I was going to try benching 3 days a week. One day close grips and assistance, another day almost entirely bodybuilding shit and dumbbell work, and a heavy, comp grip bench day. On the heavy bench press day, all I did was heavy barbell bench presses, and downsets. Maybe, once in a while, some pushdowns or pullovers, but I was getting the vast majority of my volume from the previous two days, and almost all my intensity on the last day.

Form is a a huge factor too. I had really weak shoulders, so I had to learn how to use my back to help my bypass this weak point. I didn't have great "muscle control" at the time, so it took some practice for me to lean to retract my scapula while flaring my lats. Thick lats will act as a sort of natural bench shirt, your triceps will compress into your back muscles and help you blow the bar off your chest. There's no such thing as too much bottom end strength on any raw lift, man. If you start strong, there's more wiggle room to be a little weak somewhere, or maybe make a mistake. What your upper back is doing is really more important than what your lower back is doing. Guys get so focused on that huge lower back arch, but it's really what's in your yoke and upper back that are gonna keep things stable and strong. I mean, yeah, feel free to cut off ROM with the big arch, but I wasted time on that I could have spent leaning to use my upper back properly. Most guys, for a variety of reasons, either aren't gonna pull off, or aren't gonna get as much as they think, out the arching over 4" pipe training. There's a time for that, but if you can't use your upper back correctly, it's not yet something at the top your priority list.

Another thing I started doing was the "J-curve" style bench or whatever they call it, rather than pressing in a straight line. Yeah, yeah, shorter distance, fucking equations to prove it's less work (oh shit, did I just use the wrong term?), I don't give a fuck. Once you're past the midpoint, flare your elbows out and press hard toward the face. The elbows totally tucked thing is for shirted dudes, obviously. If you're just starting with the J curve, remember to adjust your set-up so you don't jam the bar into the rack when you press over your face. Trust me, nothing sucks more than being right near the end of a max bench press and having it turn into an isometric because you're 2" too far up on the bench and hitting the upright or hooks.

Lets talk about exercise selection. You gotta do skullcrushers and FUCKTONS of pushdowns. You just have to. Any other high volume tricep work is good too. Dumbbell incline presses are great assistance. Seated DB OHP's are wicked useful for a weak delt-having motherfucker like me. I didn't train standing strict presses at all at the time, which was a huge mistake. But it didn't hurt my bench, you know what I mean? I could have been all around stronger, sooner, had I been pressing as well, but it's not necessary to bench larger weights. If you're going to do presses, I think everyone should stay light and snappy there most of the time, and for that reason would advise my usual lots of doubles at 70%. I would suggest you do them prior to benching, except on the comp grip HEAVY day if you were doing a three day split as I did that summer (and have often since). However, that's not what I did to make my bench explode. I'm just encouraging anybody who might read this to put the weights overhead, strict, and standing, baby. Did a lot of JM presses during that time. Although, now I'm inclined to agree with my friend Roberto, who says they turn into sloppy close grips, almost always. I do like a shortened ROM 2-3 board JM press though, as weird as that sounds for a raw guy. It lets you use a fairly large weight for an "isolation" exercise, because of the small ROM there's less room to slop it up, and it cuts down on the elbow problems I've had with doing JM presses in the past.

Do band pushdowns all the time. All the the time. Loop a band over your head, and walk around doing unlilateral pushdowns  Maybe turn it into a dance. Doing band pushdowns after my bench workouts is how I got into "recovery workouts" or "active rest" or whatever the hell they call it, and that's actually a really sound concept. I do the same thing with good mornings with bands for my posterior chain. Do your pushdowns, your elbows and triceps will be happy. Everyone loves pushdowns and so do you.

Just like with anything else, you need to cater to your weak points. The middle day in the three day split should be almost entirely focused on fucking up your weak points. For me that summer, this meant a lot of shoulder work on Wednesdays (give yourself the most rest between this day and the heavy day, if possible). The exercises mentioned already, along "goofy" things like lateral raises, Jim Williams style plate raises (overhead instead of face level), upright rows, all kindsa weird shit for high reps getting the pump. It's like cumink. And pushdowns.

There's a reason every gym has a bench monster, even if nobody deadlifts or has any idea what they're doing, and it's not JUST because it's the only lift guys do besides curls. It's because the normally stupid mentality of "more is better" actually works with bench pressing. I like lots of 5's. Heavy triples on comp grip day. Singles are overlooked and awesome for most lifts. But don't do them unless you're maxing out on the bench press, you're wasting time. I'm usually looking for 8-12 reps on downsets. 2-3 of those after some heavy triples on the bench only day, and that's a wrap, man.

When feeling beat up, skip the assistance on close-grip day, and just do heavy CGBP's for triples with some downsets on wide grip day. Bench only.

One thing that I also did, and have done on and off since (and really need to be "on" more, with) is the "prehab" stuff. Rotator cuff work, Steve Shafley's Y-band deal, rear delts, Kelso shrugs (I love doing this with a low pulley, sitting down), face pulls, band pull-aparts, all that kind little shoulder shit. Rolling tricep extensions for elbows actually seemed to work. I feel like such an asshole fucking around with tiny dumbbells and yoga bands on this shit, trust me. But it really does keep your shoulders happy when you're trying to bench 3 days a week, maybe do some overhead pressing, and squat how often? Just tack it onto the end of your workout. Do it at home if you train at the gym. Whatever, just fit it in there somewhere. Dislocates. Pushdowns.

There are two other factors that you might not have access to (although perhaps you could find suitable replacements?) that were instrumental in my accomplishing this. During this time, Lynne Boshoven was my coach, and as always, she succeeded in getting the very best out of both me, and my body. She's a master motivator, you want to lift more just to show her you can, because she's perpetually unimpressed by whatever you accomplish. Proud, sure, impressed, never. The other thing was that her boyfriend, Alice, was my bench partner. He was more than twice my age, I had a lot of bodyweight on him, and he would still take me to school every week. But I worked harder than I ever had up until that point trying to best that ripped-up old man. Like I say, I wouldn't even know how to suggest replicating that, besides "find a good coach, with a boyfriend who shouldn't be stronger than you at benching, but is", but I have to mention it, as both Lynne and Alice where a huge part of the "secret sauce" that made my bench explosion possible. To not mention it would be dishonest to the reader, and to not credit them would be hugely disrespectful to Lynne and Alice.

So to recap, one day heavy bench with your strongest grip,  one day close grips and assistance, one gay bodybuilder day for whatever bodyparts are the weakest. 3-5 on bench, lots of sets and reps on skullcrushers, incline, flat and OHP dumbbell work, 4-5 sets, 6-12 reps. Pushdowns and prehab.