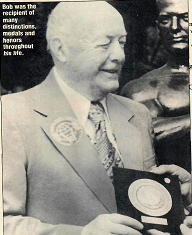 I happen to know a little bit about author Hise II, and a L-O-T about his person of interest. It stuck me that Hise vacillated between "tribute" and "tell-all" in spots, offering faint praise followed by a subtle hint of "poison pen." Nevertheless, I will acknowledge that 95% of Hise's observations and contentions were fundamentally correct, although Mark Berry did NOT own Milo Barbell or Strength Magazine. That honor went to Daniel Redmond, who put the company and mag up for sale at a bankruptcy auction in August of 1935. And from the paper work I have seen, I'm not sure "pittance" is an accurate description either. Still, this was in the midst of the Depression so very little was fetching top dollar. And in his later years, Bob spent money galore on men's and women's traveling softball teams.

Amazingly curious was the spotlighting of York Barbell Company Treasurer Mike Dietz, Sr., who did compete as on Olympic lifter into 1938, competing at the Senior Nationals that year, before exiting abruptly. It struck me that Hise was saying... "Ladies and Gentlemen, say hello to Bob Hoffman's Unheralded Brain!" Here again is another individual I had some dealings with as he was one of my bosses. Not sure if Hise was writing in some sort of code there, with words about "tax diversions???" and visionary status when it came to real estate, securities and manufacturing.

Like I said, most of Hise's opinions about Bob,anyway, are accurate. I especially second his appraisal of Grimek in the grand scheme of York Barbell.

Thank You Jan! Your one-of-a-kind input is a treasure, as always.
I try to imagine lifting if there had never been a Bob Hoffman . . .
that says a lot about the man.