Artist Tony Chikes, creator of the "Hercules Hints" column from Muscular Development magazine, and illustrator of many other features in various publications. Charles Jenkins, artist behind the illustrations in the "Muscles in the Movies" column and others in the Hoffman publications.
Here, John Grimek answers a few questions on squats and leg training. I've put  just the gist of his answers in one post. Also, I'm including a short article of his on The Straddle Exercise (Jefferson Lift) at the end, because it fits here.
A question is asked about developing the Vastus Externus muscle of the thighs. The trainee is doing front squats in sets of 8, 5, 3, 1, 1, 1, 5, 3.
Grimek replies: in most cases more repetitions are needed to provide adequate work for the legs. A warmup of 15-20 consecutive squats may be needed with increased weight added to the bar and then reduced repetitions done to exercise the legs thoroughly.
Because the legs contain some of the biggest muscles they need lots of exercise to work them, and 15 to 20 reps in one workout is not enough to provide them with ample work. However, as long as you are making progress there is no need to change your repetition scheme . . . stay with it.
The outer curve of the thighs (or the muscles that make this curve) are influenced by all leg bending movement. However, when the legs are kept turned forward more effort can be placed on this lateral section. Keep the toes pointing front . . . but you would still be wise if you will do some with the knees pointing front, then equally as many with toes and knees pointing out. This should result in better, all-round thigh development. Besides the squat I'd include the Jefferson Lift (straddle exercise). This is another thigh builder and one that is relatively easy to do.
A question is asked about squats the enlargement of the hip structure.
Grimek answers: There are those who still believe that full squats cause the hips to enlarge. As a matter of fat, although the hips contain some of the largest muscles in the body and grow when they are exercised, they rarely ever grow out of proportion to the body. They may look big only because the upper body is not developed proportionately.
Moreover, too many trainees don't do enough repetitions in the squat. They do a few reps and this only stimulates bulk not muscle, consequently their hips get larger but not muscular. This is why so many bodybuilders form the impression that squats cause the hips to over-enlarge but enlargement takes place simply because not enough reps are done to develop of keep the muscles firm. They do just enough to stimulate the adiposity that some mistakenly call bulk. If this was not so then all the squat [-style Olympic] lifters would have larger hips than any bodybuilder. Squat lifters do more squats than any bodybuilder will ever do. Yet most of the top lifters have fine muscular hips, not bulky ones.
Squats are a good exercise and should be included in one's training program, if you can do them. But when you do them include plenty of repetitions per set not just 5 or 6 . . . do 20 or more for muscularizing the hips and building leg power and shape.
The reason why your hips look larger than your shoulders is because your upper body may be under par. Take steps to develop your upper body, and squats can help you to do this better than any other exercises.
Take a weight which you can do 18 to 20 consecutive squats. Immediately after completing this number lie on a low bench or box and do some straight arm pullovers . . . 15 to 18, breathing deeply. Return and do another set of squats with more weight, but this time do only 12 to 15 reps. Once again you should either do a pullover or a lying lateral raise while lying on a bench, breathing fully so the lungs expand against the chest walls and cause enlargement. You should repeat this once or twice more, using more weight in the squats while cutting down on the repetitions. Eventually you will find that even with all those squats your hips will begin to look smaller but only because your shoulders and chest will begin to look and get bigger. It will not happen overnight of course, so don't rush matters but train regularly and progressively. 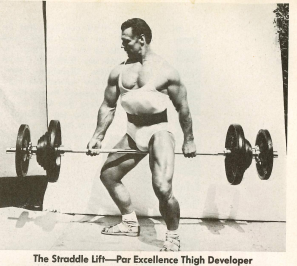 Here's John Grimek on the Straddle, or Jefferson Lift:
One of the simplest movements that works the legs, mainly the thighs, is the Straddle Lift. Originally, however, it was and still is called the Jefferson Lift named after the old timer who first practiced the movement and made it popular. 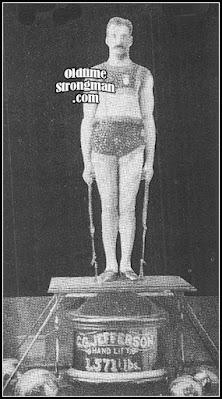 Charles G. Jefferson
The lift can be compared to the half or parallel squat, and because of the manner the exercise is performed, the thighs and hips benefit immensely.
It's Adoptability
For those who do not have squat stands and find it difficult to get the weight on their shsoulders to do squats, this exercise simplifies the problem and excellent work for the thigh muscles is had with this movement.
Performance
Performance is simple. You load up the barbell and then straddle it, advancing one leg slightly ahead of the other as the picture above shows. Now you reach down and grasp the bar but keep the back flat and chest up, gripping the bar fore and aft. Straighten the legs, pulling the bar up at the same time. This first repetition will be the toughest because your legs are bent in a deeper squat than you would normally get into. But once you complete the first rep the repetitions thereafter will be much easier to do.
Further Hints
If you experience difficulty in coming up from this initial squat, to make it easier you can select two low boxes or stools (not over a foot high) and put the loaded barbell on these supports. You then straddle the bar but before starting the exercise you swing the barbell slightly off the supports which will allow you to bend the legs and lower the barbell more without touching these supports. Then you can swing the barbell back into place and rest the ends on top of these supports when you're finished. These supports make it easier minus any strain, even on the first rep.
For Effectiveness
For the exercise to be effective the weight must be lowered to the point so the thighs are at least parallel to the floor. The illustrative photo used here was taken just before the legs were straightened, consequently the knees are only slightly bent and does not show the extent of the bend that should be done to give the thighs a real workout. As a matter of fact, the deeper the bend is performed the greater the reaction upon the thigh muscles.
Other Comments
Since many bodybuilders are opposed to squats because they think this exercise thickens and broadens the hips, then this exercise would be more than an appropriate substitute. The straddle lift, although involving the hips slightly, places most of the stress on the inner vastus group and the adductor muscles located on the inner region of the thighs . . . in fact this movement involves the hip area much less than any other leg exercises, including the Hack Lift!
Repetitions
As in all exercises that involve large groups of muscle areas, such as the legs, higher than average repetitions should be employed to achieve a thorough congestion of the tissues. The best plan is to do at least 10 to 15 reps as a warmup, after which heavier weights can be used with gradually lessening reps.
Low reps, 3 to 5, a number most bodybuilders prefer when they seek to bulk up, can be employed providing sufficient sets are done to give these muscles enough work. However, low reps do not always promote or encourage muscle growth, but generally a combination of fat with muscle that gives the legs that bulky, undefined look. Higher reps, on the other hand, tend to chisel deeper furrows into the thighs which makes them more muscular and rugged looking -- a more desirable condition to the physique man.
Enjoy Your Lifting!

Nice, quick history lesson, complete with faces to go with the names of Chikes, Jenkins and Jefferson. But tell me, Oh, Great Giveitaname, why does Grimek look like he is working his quads & hips in the picture, but when everyone on the internet does a Jefferson lift, it looks like they are doing a very faulty form deadlift?

I was real smiley when I found those artist photos. Cool!