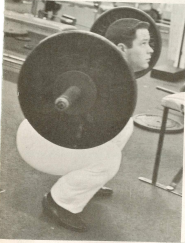 The routine used by Ronnie Ray in training for powerlifting championships calls to mind a little musician known as Johnny One-Note. Johnny messed around until he found the note he liked -- and then he stayed with it.
That's Ronnie Ray's secret. He has found what he considers a perfect training routine, and he has stuck with it year in and year out, six days a week, for four years now. And though we might argue that Johnny One-Note was something less than a polished musician, it's hard to say that the one-note system hasn't been right for Ray.
His lifts have continued their upward path . . . up, up, up to national championships and national records, with no sign of a sticking point, no flatness. [up, Up, UP would work nice there. I'll stop now].
"You don't have to get stale if your lifts keep climbing," Ray told Muscular Development recently. "Some guys might get stale, I guess, but I don't. I've trained this way for four years without changing."
The only change is that he adds more weight to the bar every year. "You can't reach your peak in a hurry in powerlifting," he said. "You've got to get stronger though the years. I think that's where some people make a mistake; they work on powerlifts a little while and they don't make fabulous progress, so they get discouraged and switch to Olympic lifting. The same thing happens there, so they switch back; and it's back and forth all the time wondering why they show no progress.
"Powerlifting is something you have to stick with, something you have to be dedicated to. Anyone can get stronger -- a lot stronger -- but strength just simply doesn't come overnight," Ray injected. 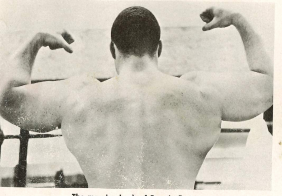 Ray's strength has come over a period of five years, which is how long he has been powerlifting seriously. Before that, his lifting was devoted to bodybuilding. The marks of a bodybuilder are still upon him? The V-shaped back, thick chest and baseball biceps. The marks show through even though he now carries 205 pounds on his five-foot three-inch frame. He can drop the 24 pounds necessary for competition as a light-heavy in "about a month," he said, with a combination of will power, diet and steam. By taking that long to shed the weight, he loses little strength.
Ray spends something less than eight hours a week in workouts. He works fast, partly out of habit and partly because he has other business to tend to. He doesn't have time to waste. Ray owns three health studios, but his major source of income, he noted, are his apartment buildings and land dealings. One does not make money in real estate unless one keeps one's eye on one's business. Carelessness in the marketplace can cost a fellow his T-shirt.
But even though he stays busy making money, Ray finds time to train six days a week. He splits his training into two sections: Monday, Wednesday and Friday for the squat and deadlift; Tuesday, Thursday and Saturday for the bench press, his favorite lift. His partiality for the bench press is evident in his totals, for he consistently breaks American records in both the 181-pound and 198-pound classes. 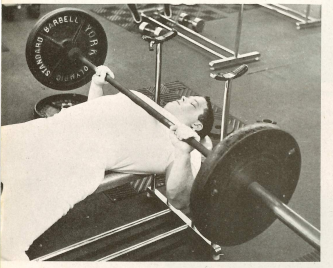 Pre-arch, pre-suit, pre-extreme usage.
"Here's the bar. Now press it."
Straightforward Strength.
As a guy who's toeing 69 years I realize
all things evolve, and not always for the better. 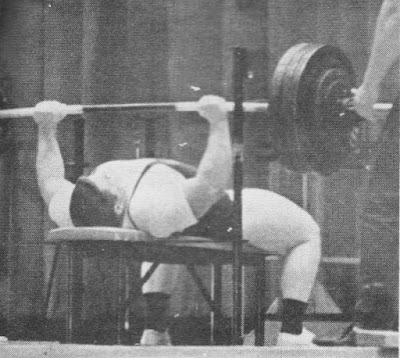 Ray traces his bench press ability to two things: First, he has short arms, which gives him an advantage of leverage in pressing up the bar. Second, he had a head start through his years of physique work.
"Most bodybuilders," he said, "have deep chests and big pectoral muscles, because they have to have these things to win physique contests. They develop these muscles in a lot of ways, but mainly on the bench.
"I was benching 300 when I was still in physique competition, so it was no trouble for me to go into heavy work in powerlift competition." Ray has a 48-inch chest, huge for a man of his height.
Ray switched over from bodybuilding to powerlifting for keeps in 1964. He had begun working with weights six years earlier, in December of 1958, when he as a scrawny 115-pounder. He was 16 years old then; he's 26 now. He gained to 160 and started winning physique contests regularly by the time he was 20. He won Mr. Dallas, Mr. North Texas and Mr. Texas titles before he changed to powerlifting.
Ray deserted the physique ranks after an accident at work (on a construction job, before he went into business for himself). The accident kept him away from the weights for most of 1963. He pulled the ligaments in his back, and the doctors told him he would never lift seriously again.
Ray wore a back brace for six months and came close to giving up the sport. But with the help of Jerry Travis, a Dallas Health studio owner, he started lifting again, only this time the powerlifts were done to strengthen his weakened back.
They did. 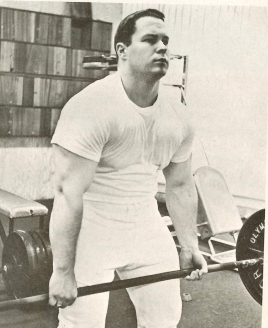 This was a fascinating read! I've wanted to know more about Ronnie since he was mentioned twice in Jim Williams' Bench press book that I bought from Ricky Dale Crain. Jim met him in the 60's and had been friends with Ronnie since then until Jim's unfortunate passing. Jim states that Ronnie's best bench was 470 @ 165 lbs. bodyweight!

Is this the book you mentioned?

While high repetitions with a warmup weight are interesting, I found it more curious that he did four singles with working weight, then as many reps as possible on the 5th set. Very strange, but I can see why he did it

That definitely caught my eye too. Different . . . and it worked for him!

I clicked on your PDF link and yes that is indeed the book I mentioned. That along with Pat Casey's book are what I believe to contain the best material on bench pressing ever!

Some great stuff all right! The full Casey book is on this blog in several parts.