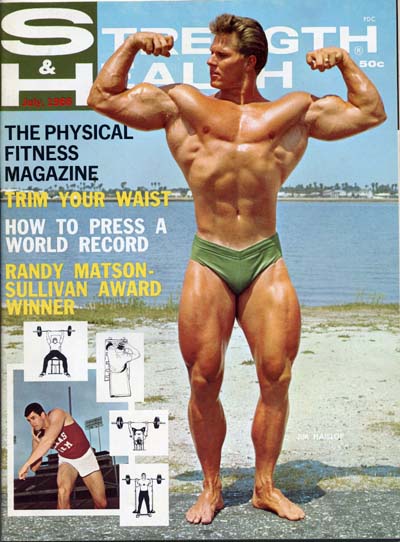 Originally Published in This Issue (July 1968)

Once upon a time there was an enthusiastic young man who trained very hard weights. He wanted to look like Mr. America - only more so. He took York supplements wisely and he went through all the proper training routines. He bulked up with power training, high set pumping routine, and enough food to supply the British 8th Army. When he began to get a little soft looking, he hardened up with intensive P.H.A. training, running, and the definition diet.

At the end of the first cycle he owned a strong, shapely, muscular physique. Still he wasn't satisfied.

One evening he went into the living room to discuss the problem with his father who was watching "Star Trek" on the television.

His father was crouched on the edge of his chair and leaning tensely forward.

"Dad," the young man said. "You know more about bodybuilding than anyone else I know."

His father stared straight ahead.

The young man spoke louder. "Sir," he said. "I consider you an authority."

His father stirred slightly. "Thank you, Mr. Spock," he said.

The young man shook his father's shoulder. There was no response.

"Sir," he said. "I've got a problem. I train real hard. I get results. But I still don't look good enough. How fast can I reasonably expect to improve?"

There was no answer.
"At what speed should I improve, sir?"
His father looked at him. His eyes were glassy. "Eh?"
"What speed, sir?"
"Warp seven, Mr. Suto."
The young man leaned down and looked carefully at his father for a long time. He turned and looked at the television. He watched it for a while, and then very slowly and without taking his eyes off the screen he pulled a footstool towards him and sat down. They sat side by side in the semi-darkness and watched the flickering figures. Finally the crew beamed back aboard the Enterprise. The ship broke orbit and streaked away. The picture faded and the commercial came on with a burst of fanfare. The young man's father leaned back and exhaled slowly. He looked around. "Hi," he said. "Just come in?"
"Not exactly," the young man said. "I wanted to ask you a question."
"Does it involve money?"
"No."
"Okay," his father said. "What is it?"
"It's about my training," the young man said. "I don't look good enough."
"You look real good," his father said. "What're you complaining about?"
"I don't know," the young man said. "I seem to lack something."
"Take off your shirt," his father said. "Let me have a look at you."

The young man took off his shirt and his father studied him for a moment.

"I know what it is," the father said. "You're ready to specialize on your showy muscles for a while."
The young man stared blankly at him.
"There're certain muscle groups that are more showy than others," his father said. "Generally speaking, they're the areas where untrained people show no development at all. When these areas are highly developed, they look incredible to the average person. The three most impressive areas are the deltoids, pectorals, and abdominals. Develop them to the maximum and you'll look like something from another world."
"Like in 'Star Trek'?" the young man said.
His father gave him a cold look. "What you need to do now is to specialize on those areas for a short time. It'll transform you from merely looking good into looking sensational."
"Okay," the young man said. "Tell me how."
"Work out six days a week," his father said. "Work the specialization areas on Monday, Wednesday, and Friday. Work the rest of your body on Tuesday, Thursday, and Saturday. On your specialization days, do this:
"Start with seated presses behind neck. Do 5 sets of 7 reps. Use a moderate weight for the first set, a little more for the second set, and all you can handle for each of the last three sets. Use a wide grip and work up into very heavy poundages. Use the rebound style. Don't let the bar rest on your shoulders between reps. Just touch the back of your neck and drive it right up again.
"Next, lay face down on a 45-degree incline board and do dumbbell lateral raises. Do 4 sets of 10 in rigid style. Don't worry too much about the poundage. Hold the position for a split second at the top of the movement.
"As soon as you finish, lay on your back on the incline board and do forward raises with a light barbell for 4 sets of 10. Keep your arms straight and do these in strict style also.
"Your last deltoid exercise is a bit different. You use weights and cables both. Tie plates to the handles of the cables. Then do lateral raises using the weights and cables simultaneously. This keeps tension on your deltoids all the way - from the cables at the start and from the weights at the top of the movement. Work hard and do 4 sets of 10.
"Take a short rest and then start the pectoral work. Begin with incline dumbbell presses. Do 5 sets of 7.  Moderate poundage for the first set, more for the second set, and all you can handle for each of the last three sets. Keep the dumbbells well out to the sides all the time. Use a 45-degree incline and work into very heavy weights.
"The next exercise isn't too well known. You need flying rings suspended about shoulder-width apart. Get into position face down with your hands holding the rings and your feet on a bench or something about the same height as the rings. Bend your arms a trifle. Now, keep your elbows locked in that position. Don't bend your arms any further, and don't straighten them out. Let the rings go out to the sides while your body drops down between them. Now pull the rings together so that your body is levered up again into the original position. Pull the rings together till your hands meet and then squeeze your hands together for a split second. Do 4 sets of 10. It takes a little getting used to, but it's the best localized pectoral exercise.

"The next exercise is the flying exercise on the incline board. Do 4 sets of 10.

"That completes the specialization part. On alternate days work the rest of your body.

"Start with prone hyper-extensions. Do 3 sets of 10.

"Now do your squats. 5 sets of 5. Use the first two sets to warm up on, and go all out for poundage on the last three sets.

"Do a light set of pullovers after each set of squats.
"As soon as you finish the squats and pullovers, go to the calf machine and do 5 x 25 on the calf raise.
"That completes the leg work. Now you do wide grip chins behind the neck. 4 x 8. Tie weights around your waist for added resistance, and try to work up into fairly heavy poundages.
"From there you go to your arms. Do incline bench dumbbell curls alternated with triceps extensions on the lat machine. 4 sets of 8 reps each.
"As soon as you finish your workout, put on a heavy track suit and go for a run. Run about two miles at a nice easy pace.
"Keep your protein intake high. You don't have to cut out carbohydrates completely, but keep them to a minimum. Stick to meat, eggs, cheese, milk, fish, and poultry for the bulk of your diet.
"Take supplements. Vitamin/mineral. some form of oil, and the best protein supplement you can afford.
"Now," the young man's father said. "Do you think you can handle all that?"
"I'll try," said the young man. "And you figure it'll make me look more impressive?"
"I guarantee it," said his father. "You'll get mobbed when you step on the beach this summer."
"Good," said the young man. "Any idea how I can hold off the admiring hordes without hurting them?"
"Certainly," his father said. "Set your phaser on stun."