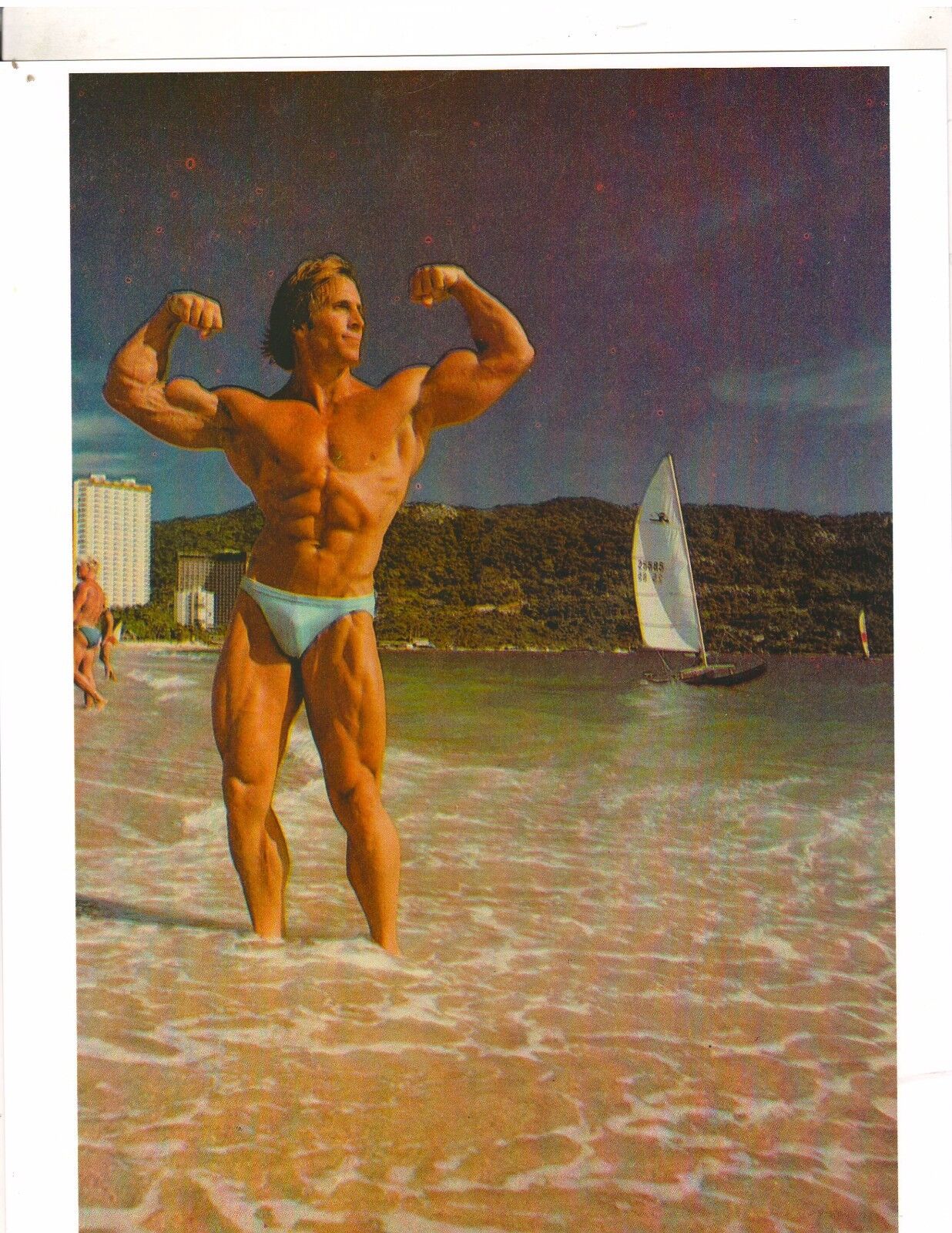 The process of selecting goals and training techniques to achieve those goals is basically the same for both the advanced and beginning trainee.

The differences arise when goals have been defined. The advanced trainee has physique competition as a goal whereas the beginner and intermediate trainee have improved health and appearance as primary objectives. This is not to say that the advanced man has forsaken health as a goal. Instead, the advanced trainee has chosen to seek a level of physical excellence far beyond the obvious benefit of progressive weight-training and improved nutrition. The search for the right formula to achieve success in competitive bodybuilding has been the main subject in bodybuilding circles around the world. Even though it has been established that "what works for one man may not work for another," I am offering this article as a framework around which the advanced trainee can construct a balance between his bodybuilding goals, physical attributes and training routines.

Step One: Self Evaluation

The three basic male body types are ectomorphic, mesomorphic and endomorphic. These classifications are generalities, however, since each of us is more likely a combination of traits from each classification. The point here is that there are definite physical attributes associated with each body type. The advanced trainee must become aware of his body type to include analysis of both strengths and weaknesses as well as the relation of his physical limitations to his long range bodybuilding goals. Vince Gironda and Frank Zane are living exponents of this process of physical analysis. Both men made accurate physical evaluations of their body type and then set about to develop their strengths and reduce their weaknesses to the point of physical perfection. Vince Gironda, you will recall, literally invented the concept of muscularity in the 1950's and was able to attain a level of physical excellence that did not become the standard until some 15 years later. Frank Zane too has made a tremendous contribution to the philosophy of physical culture. Frank, though not as massive as his competitors, has utilized the idea of physical self evaluation to the "Nth degree." Zane trains to maintain a balance of all his muscle groups so that none are overwhelming separately, but when taken as the bodily sum total can be devastating enough to defeat Arnold, which he did.

The first step in the process of "Advanced Training" is the analysis of your body type, because your physical structure will ultimately determine which exercises produce results. The second step is to personalize your exercises. For example, a man with long arms does not have as good of leverage in the bench press as the man with shorter arms. Therefore, the first man would be better off doing some other kind of pec movement such as flat flyes. This concept is known as "Instinctive Training." Larry Scott personalized each of his exercises. Between 1965-1967 Larry used the standing dumbbell press as his main deltoid exercise. However, the way he performed that movement was nothing at all like any standard description of that movement you have ever read.

He started the movement with the dumbbells parallel to each other in front of his chest. Next he rotated his elbows down and back and pressed the bells to about 2/3's extension for 6 reps. Then, he tilted the dumbbells in such a way as to have the elbows behind the body with the little finger side higher than the thumb side. In this position, he performed another 6 reps. End of Set! I hope I made the point clear enough. After analyzing which exercises are best suited for your body structure, the next step is to "personalize" each exercise you've chosen so as to make any exercise you do exactly what makes you respond. I think it's safe to say that Larry's dumbbell press gave him more development than the standard version ever would have. If you take the time to personalize each of your exercises, the primary benefit will be that you will be able to isolate the muscle you are working and isolation will produce results.

The third step in this process is to establish your training tempo. There are a few rules about tempo for the advanced man. One, never carry on a conversation while training - talking takes mental energy away from the needed concentration. I'm not suggesting the use muzzles, but I have noted that as the elite stars train together, there is no deep conversation - maybe a joke or a mock insult between sets, but no real thinking is involved. Two, never rest more than 30 seconds between sets and I mean never. The work you do is a function of the amount of weight and reps used, and the time between sets. The longer you rest between sets, the less work you do. It's as simple as that. If you gym does not have a clock with a second hand, then wear an old watch. Time yourself between sets and be amazed at the results. One method I have used before a contest is to cut the time to 20 seconds between sets for 4 weeks, and then the last 2 weeks to 10 seconds. You may have to use lighter weights but the results in increased muscularity will surprise you. Finally, strive to make each workout more intense than the last. In this way, your work load will accumulate. One of the most depressing phenomena for me is the student who uses the same weight, workout after workout. If you don't get stronger, you'll never get bigger.

The fourth step is to determine your work load - that is the amount of sets, reps and times per week you train each body part. The principle here is to strive to do as little as possible and still obtain maximum results. Over-training is the advanced man's biggest downfall. Quality training means getting the most out of the work you do. The minimum amount of work would be 6 sets of 6-10 reps per body part three times per week. The maximum amount would be 20 sets of 6-10 reps three times per seek. Somewhere between these two limits will be ideal for you. Note the reps listed are 6-10. This holds true for all body parts except calves and abs which should be between 15-30
This is the first part of a two part series for the advanced student. The second part will contain valuable information on the following topics of interest: Diet, Mental Attitude, The Training Year, Contest Preparation and Posing. 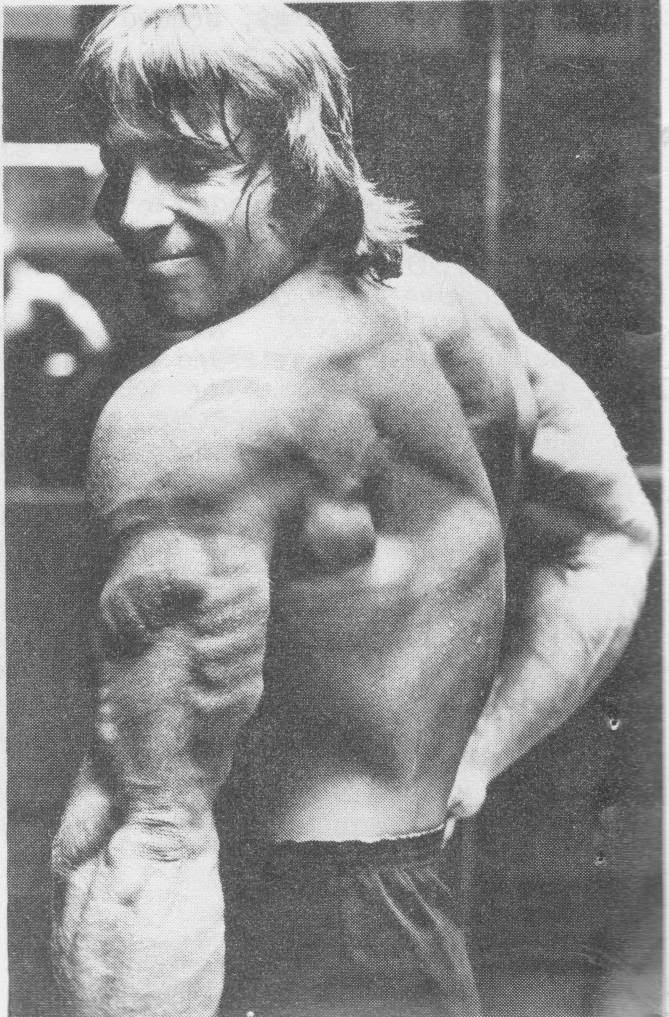 This is the second part of my series. To review, in the first part I covered Self-Evaluation, Personalizing Your Exercises, Training Tempo and Work Load. In this article, I will discuss Diet, Mental Attitude, The Training Year, Contest Preparation and Posing. The intent of these two articles is to give the advanced trainee a framework on which to build his own unique, personalized program. I might add that I have purposely confined my writing to generalities rather than the specifics of my own program. Other than for general information, I see very little value in talking about what works for me. Your first goal, which, by the way, is the most difficult to achieve, should be to find what works for you individually and NEVER DEVIATE FROM ITS APPLICATION.

There are two basic diets: one, to increase muscularity while retaining as much size as possible and two, to increase muscle density without canceling out all definition. To increase muscle density you must "burn" the stored layer of carbohydrate (glycogen) that is located between the muscle and the skin. In order to force your body to burn this layer, you must restrict carbohydrates from your diet. Obviously your energy level will drop too low for a decent workout, so within reasonable limits, you must take in enough carbohydrates to blast through a workout, but that is it. Each person can burn fat at a varying rate, so let it suffice to say that you must find how much carbohydrate you can get away with while increasing your muscularity. Remember too that these are the best sources from which to select your daily allotment: potatoes, fruits, vegetables and other natural or honey sweetened dairy products.

During the off season, when you are working your weak points and trying to increase overall muscle density, you should not, at any point, lose sight of your abdominals. Getting fat during the off season is detrimental to your success. Depending on your bone structure and height, I would say never to go over 10 pounds above contest body weight. Indulging in restricted foods after a contest is good for the soul, but don't overdo it. Stay in shape.

To increase muscle density you must train heavy and create a dietary plan that is high in protein and relatively low in carbohydrate. I get bigger quickly when I use dairy products such as raw cheese, raw cottage cheese, raw milk and raw yogurt. Don't confuse refined sugar with energy. I never use sugar. Also, a good milk and egg protein powder mixed with raw milk will supply your system with readily available protein. I find that by having a protein drink one hour before my workout I can put a lot more into my training. For a more complete explanation of nutrition and bodybuilding, get a copy of my course "Total Muscularity."

Adequate pre-contest planning can mean the difference between winning and losing the physique contest of your choice. Plan for your big show at least one year in advance. 12 months is sufficient time to correct your weak body parts and still obtain sharp muscularity. Here then is an outline for the training year:

I. 12 to 9 months prior -
a) Train heavy.
b) Increase your intake of carbohydrate, but do not get fat or say, 10 pounds above contest weight.
c) Concentrate on your weak body parts.

II. 8 to 5 months prior -
a) Moderate weight, slightly higher reps.
b) Go on a low carbohydrate diet, start increasing your muscularity.
c) Train for overall symmetry.

III. 4 to 2 months prior -
a) Lighter weights, high reps, never more than 15 seconds rest between sets.
b) Use only as much carbohydrate as you need to get through a workout.
c) Train for maximum pump and burn.

IV. 1 month prior -
a) Train in a frenzy!
b) Use pre-contest diet. (see III)
c) Concentrate on lagging body parts, so that by contest time you have balanced muscularity.

We have all heard words like motivation, determination, instinctive training and positive attitude. I have written about and lectured to many of my education classes on the subject of mental attitude, but I am convinced that for bodybuilding, motivation for example is the most effective concept. At present, I can think of no better example than that of my training partner, Harvey Keith. After a long layoff, Harvey turned the light back on. He took a long look at those areas of his physique that needed improvement and specialized relentlessly on these muscles, particularly the calves. Each morning, Harvey got to the gym at 6:00 a.m. and pounded his calves for one hour before he worked any other body part. He never got to the gym late, never missed a workout and literally beat his calves into submission. Harvey had heard all the myth cop-outs about the near impossibility of diamond-shaped calf development, but he never listened. Instead, he analyzed his weakness, designed a scientific training program, made each workout for his calves more intense, thought only that he would succeed and after one year's efforts, he can claim a one-inch increase of each calf while weighing the same. If you can match Harvey's intensely positive attitude and apply that to your training, you would HAVE TO SUCCEED.