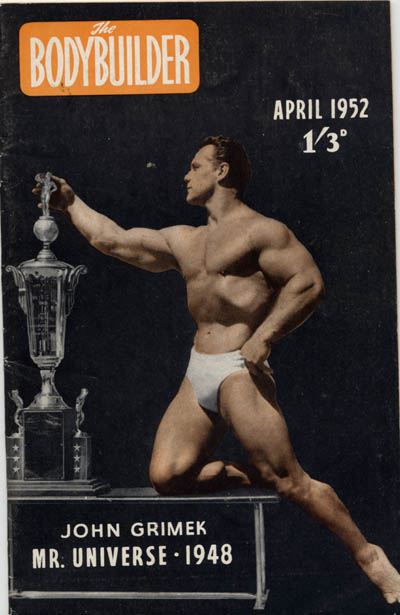 Originally Published in This Issue
and made accessible THANKS to Liam Tweed. Poetry has made the village blacksmith a romantic figure  of brawny strength, and some facts given recently in my Health and Strength "Random Recollections" series about Joe Price showed how such imagery became translated into the real thing in the shadow of an ancient English cathedral pile. Illustrius though Joe was in this respect, He was but treading in the footsteps of an even more illustrious man in the strength world who, in another country, started from similar beginnings. This was the once world-renowned John Marx, who (unlike Price) gained no part of this renown through outstanding skill in the making of horseshoes but by his ability genuinely to BREAK THEM.

Marx (which was his stage name) was born John Grün on August 27, 1868, at a little place called Mondort, in the Duchy of Luxembourg. His father was a blacksmith, his grandfather also, and for some while, as he grew up, young John followed the same calling. He did not dislike the business, but his inclinations leaned more towards travel than staying where he was, so in his late teens he set out for America. Here he obtained work not in a forge but in a saloon, serving as bartender and general handyman around the place. And here he "met up" with the first stage of his destiny.

Drinks On The Strong Man

Into the saloon one day strolled a big, powerful fellow who was giving a strongman show at a local hall, calling himself Aloysius Marx. Professional strong men were a great attraction at this time, and when the news got around as to who was in the saloon, the place filled - all drinking, by invitation, at the visitor's expense! Soon, as might be expected, he was asked to give a "close up" exhibition of his powers. Appreciating the publicity value of this to his music-hall show, Aloysius was nothing loath. He called for a barrel of beer, which he lifted from the floor to one shoulder, then carried it round the bar. He then offered to set up drinks all round again if anyone there could repeat this performance.

At first it seemed that the challenge had fallen on unresponsive ears. Then came a surprise! "Does the challenge include me?" queried the bartender. "Why not?" replied Aloysius, giving John Grün close attention for the first time. "Try your luck, man," he continued - "no one is barred." So exhorted, the bartender did do, making his effort successfully. Then went back behind the counter to help fill up all glasses as had been promised.

Aloysius, although necessarily crestfallen by the occurrence, being also a man of resource, sought to turn the happening to profit. "Say, Samson," he whispered to John Grün as the latter was refilling his glass, "how would you like to partner me in a strong show round the town? We would team well together, I'm sure. How about it, young fellow?" The prospect appealing to John, he accepted, and so came into existence "The Brothers Marx: Herculean Performers." 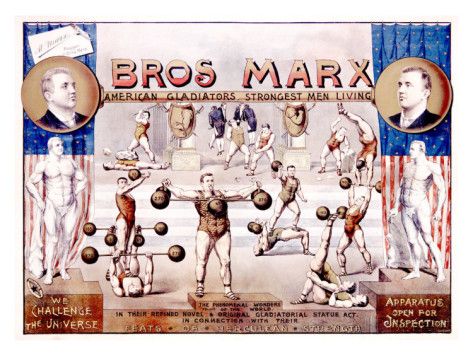 Under this title, the twain toured the States, happily and profitably for some time. Then they decided to come to England drawn by the magnet of the even bigger money which "top men" in this business could pick up there.

They arrived in due course, to discover that Sampson, in spite of his defeat by Sandow, was still throwing out challenges to the world. So they decided to invade his stage, not expecting to get "Sampson" into contest, really, but hoping that such event would send their own show off to the best of all possible openings. As they planned, so things turned out. Not quite, though, in manner expected, for the publicity they got was linked up with police court proceedings. Certainly, they hadn't allowed for that! Briefly, this is the story.

Charles A. "Sampson" was notoriously a very excitable man, and when the Marx Brothers erupted on to his stage, in a few moments he had worked himself into a veritable frenzy - a mood which, communicating itself to the audience, soon created enough excitement to satisfy anybody! In such atmosphere, "Sampson" (quite misjudging his man) proceeded to make John the butt of his equally notorious insulting wit. For a minute or so, the victim stood it stolidly; then, a dull flush suffusing his face, a gleam presaging trouble in his eye, he said this: "You are just a noisy, boastful, sham strong man. Very easily I could crash you down," and suiting action to the word, he did so, hanging a terrific right hander on Sampson's jaw which put the latter "out to the wide."

John made no attempt to leave the stage; he waited there until the police came to take him into custody, Sampson having sufficiently recovered meanwhile to prefer a charge against him, The subsequent proceedings found him 50 pounds lighter in purse, but from the point of view of advertisement, it proved to be money well spent. For right away the Marx Brothers got all the work that they could handle. They played to full houses at the beginning because of the publicity attendant on the incident. They drew the same size crowds afterwards entirely on the merit of their show. for these men were really great performers - right in the front rank of their kind!

They did several things then which had not been seen before - some which no one else ever attempted to duplicate afterwards! Two of these may be mentioned, both so primitive in character that it was some time before the explanations of "fake" was removed from them. The first was performed by Aloysius. It brought in a massive slab of stone which he hoisted from the stage to rest on his head, holding it each side with his hands. Then on to a platform erected beside where he stood, a man would climb and strike the stone with a 14-lb sledgehammer is the fashion of the "hammer and clink" navvy road-breakers of that day. Sometimes the first blow would split the stone; others, it took several full power blows to do it. All he had as insulation between the top of his head and the stone was a good head of hair. That's definite!


Horseshoe Wrenched in Half!

The other feat in question was where John broke a horseshoe in half by wrenching and pulling on it with his bare hands, using the top or side of his thigh (unpadded) as fulcrum base. To prove that the shoe was sound, before performing on it he would loop a rope over each end and let 10 men pull on the shoe in the middle (5 each side). Some good fun was often got out of this interlude, it having entertainment value as well as being good showmanship. Then John considered the demonstration had gone far enough, he would then take charge of the shoe, and after a strenuous tussle, rend it asunder as described. It was always a tussle, simply because it was a genuine feat. There was no need to "put on an act" to make it look hard. It WAS hard and John never made any claim to the contrary.

The Brothers Marx worked in double harness for some years, then the man from Luxembourg struck out on his own under the title of John Grün Marx. It was while working this act that he performed his greatest feats. Among these was his harness lift of a platform on which was never less than 25 men stood, sometimes as many as 30 crowding thereon. This equaled - and sometimes shaded - Apollo's lift of Bostock's biggest elephant and cage in the same fashion.

John Marx didn't do a lot of orthodox weightlifting in his show; what lifts he did do were of specialty type, mainly performed with thick handled barbells and dumbbells. He had a pair of 120-lb dumbbells on which he used to run a competition for years, the final being held on the Friday night of each week. There was a reward of 50 pounds to anyone who could lift these bells clean from the floor and overhead, but no one ever collected the money. Small wonder! The circumference of the grips was 9 inches - and these grips revolved! Marx, however, demonstrating each night how they had to be lifted for the 50 pounds to be forthcoming - raised them as though they might only have been a pair of ordinary "fifty sixers."

He also had a barbell of 160 pounds which he used to toll aloft in One Hand Snatch style as easily as a feather. Not much weight, you say? True! But the thickness of the shaft of this bell in the center was also 3 inches. That was quite sufficient to stop anyone else doing it - save, perhaps, Arthur Saxon! Between men of this character, thought, there was a "live and let live" understanding, so they never clashed.

John Marx was the only other man who could do with four block "fifty sixers" what Arthur Saxon sometimes used to do with them: Take two gripped in each hand from the floor and "military press" the four of them six times from the shoulders in slow succession. Marx was also one of the first men to lift 300 pounds Clean and Jerk. Note, though, that this lift was done on a bar above 2 inches thick, and NOT WITH THE THUMBS LOCKED! It would be interesting to see who among the champions could duplicate this feat today.

I came to know John Marx very well during the latter years of his exhibitions here in England, due to my association with Bill Slade, who was John's favorite competitions' winner. I saw his show many times from the side of the stage; and afterwards (with Slade) spent many an instructive and inspiring hour in his dressing room, listening to his ideas and stories.

John was a fine man in all ways - one of the greatest of all the real, strong men! If he had a fault, it was of being generous to that fault. Which explains why he did not die a rich man, in spite of all the big money he earned.