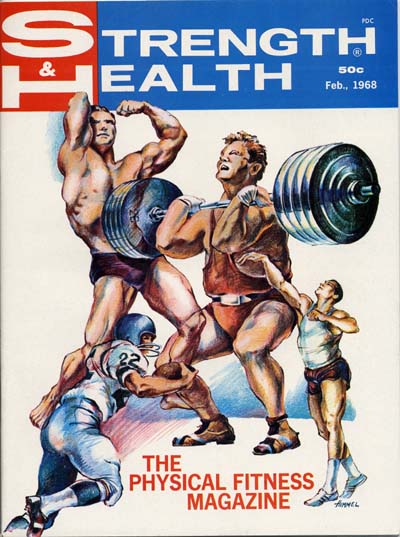 Originally Published in This Issue (February 1968)

Trimming Down
by John McCallum (1968)

If you're training hard and eating well it's easy to slip on a few pounds of excess fat. The trouble is that fat's an insidious substance. It creeps up so gradually you're never really aware of it. One day, though, you may find you've accumulated enough blubber to mar the physique you're working so hard to perfect.

At this point, the smart thing to do is trim off the excess lard, get into fairly hard condition, and then start bulking up again. This is the procedure followed by a lot of physique champions.

Some trainees are reluctant to trim down even on a temporary basis. I've know men who'd pack around fifty pounds of pure fat just to look bulky. My daughter's boyfriend was like that.

I started Marvin on weights a couple of years ago on a bet. It was a mistake. He got to like it. Marvin's training methods are as simple as he is. He went from a skinny nut to a bulky nut in nothing flat by squatting three times a week and eating everything that didn't bite back.

Marvin avoids work like the bubonic plague. His only other recreation is the beach. He walks around with his chest stuck out, eats hamburgers, and kicks sand in everyone's face.

A few months ago I talked him into trimming down.

He'd been to a show with my daughter. They walked in and he flopped on the coach. She bustled around in the kitchen and brought him back a plateful of sandwiches and a king-size Coke.

He bit off half a sandwich and washed it down with Coke. I put down the book I was reading and gave him a cold look.

"You know, Marvin," I said. "There's a lot of restaurants in town."

He pushed the other half of the sandwich into his mouth and licked his fingers. "Who needs them, Dad?" He swished Coke through his teeth and swallowed like the last of the water going down the bathtub drain.

"Marvin," I said. "It seems to me that when you take my little girl out for an evening the least you could do is feed her in a nice restaurant once in a while."

"Stay-at-home?" I snarled. "I wish to goodness you'd stay at your own home once in a while."

"Home cooking!" I said. "You could parbroil slops for a Hudson Bay dog team and that nut'd eat it."

Marvin ate another sandwich with an air of studied indifference.

"Did you have anything to eat at the show?" I asked him.

"Some popcorn," he admitted. "Just to take up the slack."

I rolled my eyes towards the ceiling.

"Marvin," I shouted. "You ate enough junk in that show to last you six months. You need that snack like another hole in your head."

He opened his mouth to protest but I cut him off. "Furthermore, I'm getting sick of watching you sit here and feed your face every night. My grocery bill looks like a ransom note."

He picked up another sandwich and bit into it. "Try not to think about it, Dad."

He dropped the sandwich and blinked at me. "Dad," he said. "You're putting me on."

I knew this would be the tough part. I sat back and racked my brains like mad. "Mo," I said to my daughter. "Do you mind leaving the room for a minute? Marvin and I are going to have a little masculine talk."

She gave me a searching look. "You can talk in front of me."

She left the room. I went over and sat on the couch beside Marvin. He looked nervous.

"Marvin," I said in my most fatherly tone. "You could be a very handsome young man, you know."

I closed my eyes for a moment. "I don't mean facially, Marvin. I mean physically."

He gave me a blank stare.

"Yessir," I said. "You could have a real appealing physique with very little effort. And," I added, "it'd be well worth your while."

I winked at him and nudged him with my elbow. "The girls, Marvin," I said. "Girls."

"Right," I said. I gave him a risque leer. "You know how the girls go for a muscleman."

He shook his head.

"Well they do," I said. "They to right outta their skulls."

"Yessir," I said. "Only they don't like guys to be fat. They like the Mr. America type. You know - slim waist, lotsa definition, the whole bit."

He started to speak but I nailed it down before he could argue. "And, Marvin," I said. "With a little work at it you could have them pounding on your door."

He closed his mouth again.

"All you'd need to do," I said, "is trim down a few pounds. Cut a few inches off your gut. You're plenty big enough. All you need to do is sharpen up a bit."

He mulled it over. "What would I have to do?"

"Just follow a special diet," I said. "A definition diet."

"Right. Follow it for two or three months and you'll be fighting the girls off."

His eyes opened wide. "Tell me about it."

"I'll do better than that, Marvin," I said. "I'll write it out for you." I went into the kitchen and brought back a pencil and paper. "Here." I wrote down a list of  foods. "The trick is to not eat anything on this list. You can eat all you want of anything else, but nothing that's on this list."

He studied the paper. "Nothing on the list, eh?"

"But anything else I want?"

"That shouldn't be too tough."

"It's not," I said. It's easy. And a couple of months from now the girls will be lined up for blocks just to get a look at you."

He folded the paper and stuck it in his pocket. "I'll make it easy for them," he said.

He blinked and stepped back. "It's a Popsicle, Dad."

"What are you talking about?" I said. "I put candy down."

I snatched it out of his hand and heaved it in the fireplace so hard it splattered on the hearth. "I know how they make them," I yelled. "They're candy and don't eat them."

During the next ten days I caught Marvin eating a bag of potato chips, a package of donuts, and an handful of chocolate eclairs because I hadn't put them on the list. I kept hounding him. Finally he got the idea and started dieting properly. He stayed on the diet two months.

He lost 21 pounds of pure fat while his muscles increased slightly. His waistline dropped from a soft 36 to a hard 31-1/2. His small waist and new definition made him look terrific and even I had to admit it.

"That's true, Dad." He flexed his abdominals and bounced his pecs.

"Marvin," I said. "Will you quit rippling when I'm talking to you?"

He spread his lats and admired himself in the mirror. "Amazing what Mother Nature can do," he murmured, "when she really strains."

I was beginning to think I'd made another mistake.

I let him get to the doorway. "Marvin!"

"Marvin," I said, "if I catch you running around on my little girl I'm going to punch your head in."

The definition diet is the modern way to trim off fat but stay big at the same time. You can lose fat and increase your muscle size while you're doing it. It's quick, effective, and painless. You can trim down to Mr. America condition and never know you're dieting.

Every trainee should trim down to moderately defined shape once or twice during the building up process. Hold your defined condition for a month or two and then start bulking up again from your new base. That way you'll stay fairly hard all the time, you'll avoid any skin stretching problems, and you'll end up with a much, much better build.

Keep up your running as outlined in the last issue. Next month I'll detail the definition diet for you.