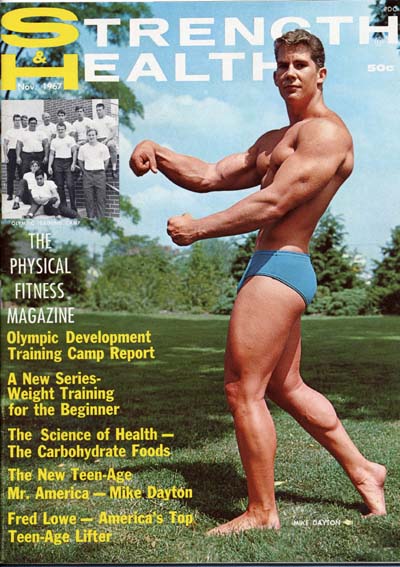 Originally Published in This Issue (November 1967)

Last month we talked about three neglected weapons in the bodybuilder's arsenal. These are:
(a) good health,
(b) endurance, and
(c) definition.
We touched very briefly on health and endurance.
This month we're going to discuss definition. We'll try to clear up any misconceptions you may have about it. And finally we're going to show you how to work good health, endurance, and definition into your training programs.
First of all, let's concede and agree on one thing - that definition is a necessary quality if you're going to compete in physique contests. It's a must if you want to look your very, very best. Nobody ever won a physique contest without at least a little definition.
For example:
Doug Hepburn was a fine competitive lifter. He was one of the strongest men who ever lived. He smashed world records. He was a world champion. He also packed more bulk per inch of height than Boulder Dam.
Someone said that Hepburn walked through a zoo once and the bull gorilla ran and hid.
Hepburn entered a physique contest many years ago. He was a lot younger and lighter than when he did his best lifting, but even then his muscles were an incredible size.

It was the first time I'd seen Hepburn stripped. I couldn't believe it. He looked like two Grimeks. Two smooth Grimeks.

I was sitting in the audience with a real authority on physique contests. I nudged him and pointed to Hepburn.
"What do you think?" I asked him.
"Jeez," he whispered. "He's enormous. Who is he?"
"Name's Hepburn," I said. "Supposed to be real strong."
"He looks it."
"How do you think he'll make out?"
He studied Hepburn for a while. He shook his head. "Nowhere, I'm afraid."
"How do you figure that?" I said. "He's got arms bigger than anybody else's legs."
"Don't matter," he said.
I took another look at Hepburn. "Why?"
"No definition," he said. "He's gonna lose."
"I can't see that. Look at the size of him."
He shook his head again. "Don't matter. He's gonna lose."
I settled back in my seat. "Okay," I said. "But I'd hate to be the guy that has to tell him."
Hepburn had everything going for him that night. He was popular with the audience. He was strong. He was shapely. He had more muscle than the rest of the contestants put together. But he had no definition and so he went home without a trophy.
The point of the whole thing is that if a man like Hepburn couldn't make it in the physique business without definition, then you probably can't either. Just being big and strong and shapely is fine. You'll look good, have a lot of fun, certainly nobody'll criticize you for it. But you won't win any muscle contests that way. If you plan to enter contests, then plan to develop at least a little definition.
Before we get on to developing definition, there's one important thing to remember. If your muscles are big and shapely enough, then you don't need too much definition. You don't have to look like a skinned rabbit. You don't want your muscles buried under a foot-thick layer of flab, but at the same time you don't want to look like an exhibit from medical school.
Some men put far too much emphasis on definition. Some of the contestants in minor contests get by with a lot of definition and not too much else. The really top men, however, reach their position because of the size and shape of their muscles. They're reasonably well defined, of course, but definition isn't all they've got.

Let's stop here and explain one point. When I say "extreme" definition, I mean "extreme." I'm not talking about a normal degree of definition where the muscles stand out nice and clean and well rounded. By extreme, I mean the type that looks as though the skin had been stripped off. Where the face looks haggard and there's big dark circles under the eyes. Where the neck is as gaunt as your sick grandmother's, and the muscles and veins are as stringy and twisted and gnarled as the roots of an old tree.

My neighbor's got a son named Wally. I took him to watch his first physique contest a few years ago. He'd been training about six months and he figured muscles were the greatest thing since running water.

We plunked ourselves in the front row and watched the curtain go up. Wally was so excited he was practically foaming at the mouth.
One of the contestants was a small man with extreme definition. He had a build like a basket full of rattlesnakes. He bounced under the overhead light when his turn came and writhed through every grotesque pose in the book.
Wally was thunderstruck.
"He'll win, won't he?" he whispered to me.
"I don't know," I said. "Wait and see."
The little guy wasn't even in the running and Wally figured it was the dirtiest deal since Nero touched off the Coliseum.
They had a little get together after the contest. I took Wally along and introduced him to some of the contestants I knew. He met the little guy with the definition and you could feel his disappointment.
"Gee," he said to me after. "He's not very big, is he?"
"No," I said. "Not really."
He doesn't look much bigger than me."
"He's not," I said.
"But on the stage," he said, "he looked like he was all muscle."
"He is all muscle," said. "What there is of him."
He looked puzzled.
"There isn't enough of him," I said. "His muscles aren't very big. He's really not that well developed."
He wasn't satisfied. "But he looked so different," he said. "He looked big on the stage."
"Wally," I said, "that was under special lighting. You could put a dead canary under those lights and it'd look like a Shetland pony. It don't mean a thing. You gotta see a guy up close to know if he's really good."

There's another popular delusion about definition. A lot of people think extreme definition indicates a high degree of endurance. It doesn't. The opposite, in fact, is usually the case.
Developing extreme definition is a grinding, depleting ordeal. Most men who starve and slave for an abnormal degree of definition have less endurance than the average man on the street. They work themselves into the ground and end up with no energy at all and a nervous system as tightly strung as Pete Seeger's "E" string.

Most of you can develop extreme definition if you want it badly enough. You can work out all day and half the night. You can reduce your strength. You can deprive yourself of half the good things in life. You can burn off every particle of subsurface fat if you really want to. But you're buying a pig in a poke. You're trading oak trees for acorns. And you're probably bringing your physical culture program to a complete and utter stop.

Let me explain what I mean by good definition.

Good definition, in the sense I mean it, doesn't mean just getting rid of your subsurface fat. There's a lot more to it than that.

Lots of people have no fat at all but they aren't defined in the bodybuilding sense. I know people who've never trained in their lives. Some of them have less fat than a boiled carrot, but there's still no definition. Their limbs are as smooth as a piece of water pipe. Even fat lifters have more definition than that.

If you want a graphic example of the relative unimportance of subsurface fat to a good build, take a look at photos of the ultimate in man's inhumanity to man - the survivors of the Nazi concentration camps of the Second World War.
Those pitiful people, whose existence shocked and sickened the civilized world, had as little fat as a human being could have and still cling to life. They had, admittedly. very little muscular development but even the starving remnants of their muscular structure didn't show through the skin to any degree.
Good definition is affected by your subsurface fat. There's no doubt about that. But it's also affected by the size, shape, and condition of the muscles underneath.
If you haven't got big shapely muscles, don't waste your time worrying about definition. Get the muscles first.
Big muscles require a lot of nourishment. I've seen top rank bodybuilders gulp down more meat at a single meal than a killer whale would eat in a week. If you want big muscles you've got to eat a diet that's rich and full and loaded with supplements. All the training in the world won't build big muscles unless you eat properly at the same time.
If you train properly and hard enough, your appetite and assimilation will improve fantastically. A healthy lifter should be able to digest anything but broken glass. As you eat more and your muscles grow it's only natural to increase the amount of subsurface fat very slightly. This is a natural process. It'd be unusual if you didn't. This may or may not give you a very slightly smoother appearance temporarily. Don't worry about it if it does. You can train for and get good definition very quickly any time you want it.

Developing good definition doesn't mean eliminating your subsurface fat completely. It simply means bringing it down to a normal level while still maintaining a lot of big, well rounded muscles underneath. Some fat is essential. It's essential to your health. It's essential to your nervous system. Just start starving yourself if you want a batch of jangled nerves in a hurry.

Developing good definition shouldn't be a grueling, exhausting process. It should be a normal, healthy, enjoyable part of your training regime. If training for definition makes you feel like you've been through the mixer, then you're either overdoing it or you're going about it the wrong way.

Next month we'll work the principles of good health, endurance, and definition into your training programs.