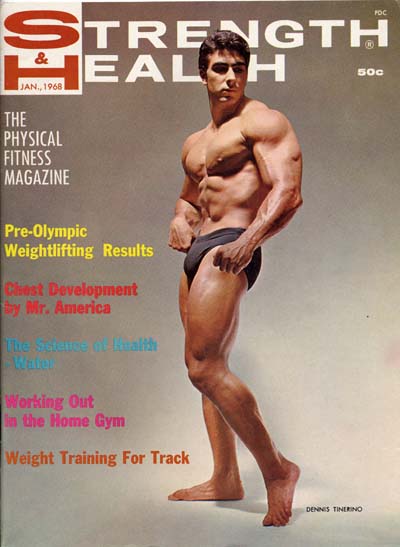 Originally Published in This Issue (January 1968)

Vancouver is the third largest city in Canada. It’s nestled on the west coast about 25 miles north of the American border, with the blue Pacific on one side of it and snow capped mountains on the other. “Where else,” the natives say, “can you lie on the beach all morning and ski in the mountains half an hour later?”

The northern tip of the city consists of 1000 square acres of sylvan beauty. It’s called Stanley Park, and it draws people like a magnet. On a Sunday afternoon you can see everything from a busload of nuns feeding the monkeys to 300 hippies holding a love-in.

If you’re really lucky you might see, jogging along the 11 mile path that circles the park, a broad and bulky gentleman who is perhaps the best built, probably the best conditioned and certainly the most modest man of all time. His name is Maurice Jones. He stands about 5’8”, varies his weight at will between 205 and 235, and packs more pure muscle than any six people you’ll ever meet.

Maury, as he’s called, is a truly modest man. Getting his shirt off is like pulling teeth. Getting him in front of a camera is tougher than getting your old lady in front of a firing squad.

Maury is the finished product of sensible weight training. He’s a trained athlete in every sense of the term. His muscles are enormous, yet he carries himself with the grace and agility of a cat. He’s an all-around strongman, not a one lift specialist. He performs as well on a reverse curl as he does on a squat or a deadlift. He has superb health and unbelievable endurance. Someone once said that Maury can lift anything not nailed down. They should have added that he can also run up the side of a mountain with it.

Maury’s in his middle fifties now, but he has the health, the strength, and the physique of a 21 year old superman. He has reached and maintained this level of physical excellence through the wise use of heavy weight training, a sensible diet, and mile after countless mile of outdoor running.

Running plays a big part in Maury’s program. I asked him once if he thought so much running might hinder his bodybuilding progress.

Let me explain one thing first. This material is not for the beginner. It’s for the man who’s been training at least a year and has made a fair change in his level of bulk and power. It’s also for the man over forty regardless of his condition. If you’re in either of those groups, running could be the most important thing you’ll ever do.

If you’re a beginner, leave running alone for now. Carry on with basic bulk and power routines. If you’re an advanced trainee with some size, or if you’re over forty years old, work the following into your training. It’ll revolutionize the way you look and feel.

There’s an old saying that nothing is perfect. It’s true of most things and it’s true with weight training. Weights provide the quickest and best means to improve yourself physically. There’s no denying it. You can convert yourself from a scrawny bag of bones to an absolute superman by training sensibly with heavy weights. Weight training is so superior to every other form of exercise that comparisons become ridiculous. But weight training, good as it is, is not perfect and we might as well be honest and admit it.

Weight training, as most of us practice it, has three flaws. Generally speaking, and unless you work specifically for it, weight training

a.) doesn’t provide enough stimulation for your heart,
b.) doesn’t necessarily ensure crisp definition, and
c.) doesn’t, as a rule, build outstanding endurance.

While the plaster is still falling, I’ll explain what I mean by that.

a.) Weightlifting is not harmful to your heart. Quite the opposite, in fact. Heavy training strengthens your heart just as it strengthens all the other muscles in your body. Weightlifters have hearts far healthier than the general populace.

But standard weight training, while good for your heart, doesn’t provide quite enough stimulation. Your heart is best stimulated and strengthened by light exercise of a rhythmical nature carried on uninterrupted for at least half an hour. Exercise of that type provides the cardio-vascular stimulation necessary for really outstanding heart health.

b.) Weight training doesn’t usually build really sharp definition unless you train deliberately for it. You can, if you wish, alter your training routines and go all out for definition. If you work hard enough you’ll probably end up fairly well defined. The trouble is, you’ll also end up so weak and dragged out it’s debatable if it’s worth it. Physique contestants who have to train deliberately for definition are a pretty weary bunch by the time the contest rolls around.

c.) Weightlifters, as a group, have far more endurance than the average man. But, here again, weight training doesn’t generally build the kind of endurance you could and should have. Like definition, you can go on a program of very high reps and build endurance, but it usually wipes out your musclebuilding progress. Endurance is developed by very high reps. You can’t do both effectively in your weight workouts.

The solution to these three problems is to supplement your weight training with exercise of an extended, rhythmical nature. This will strengthen your heart, improve your health, sharpen your definition, and increase your endurance without you having to make any alterations in your weight training or do anything to hinder your bodybuilding and strength training progress.

The best supplementary exercise, far and away the best, is light progressive running. Running will work wonders for you. It’ll improve your physique tremendously. It’ll put the finishing touches to your appearance, giving you that polished look. It isn’t generally known, but most of the top lifters include some running in their training. Bob Gajda is an ardent runner, Bill Pearl runs quarter mile sprints and Reg Park is known for his sprinting ability. The American, Russian and European weightlifting teams all run as a part of their training.

I mentioned Maury Jones. Maury was, and still is, an avid runner. In his younger days he used to load barbell plates into a pack sack and run up the steep mountain trails around his home.

If you’ve never done any running, start gradually. Use a roughly measured distance of about a quarter mile. Run at a nice easy pace. Don’t try for any speed records yet. If you can’t make a quarter mile, then keep practicing till you can. As soon as you can run one full quarter mile without collapsing, start building it up as follows.

Run one nice easy quarter-mile. Now, without stopping, walk the next quarter and get your breath back. Don’t dawdle. Walk along at a good pace.

When you finish walking the quarter, immediately run the next one. Don’t rest between laps. Jog around easy for the full lap and then walk another one.

Alternate the laps, running one and walking one, without any rest in between. Keep moving from the time you start till you finish the workout.

Gradually build up the number of laps until you can do at least ten, five running and five walking, without stopping. When you can do that, you’re ready for the next advance.

Instead of running one lap, run a lap and a quarter for your first set. Then walk the remaining three-quarters of a lap to complete the circuit. Now drop back to the one lap running and one lap walking for the rest of the workout.

Run at least two, and preferably three, days per week. If you’re lifting three days a week, run on the alternate days. You can run anytime of the day, early morning or midnight if you prefer, it doesn’t really matter. The whole thing will take less than an hour and you’ll never spend time more wisely.