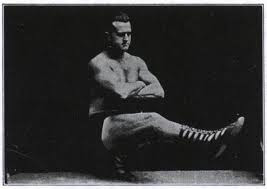 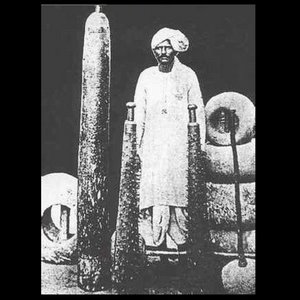 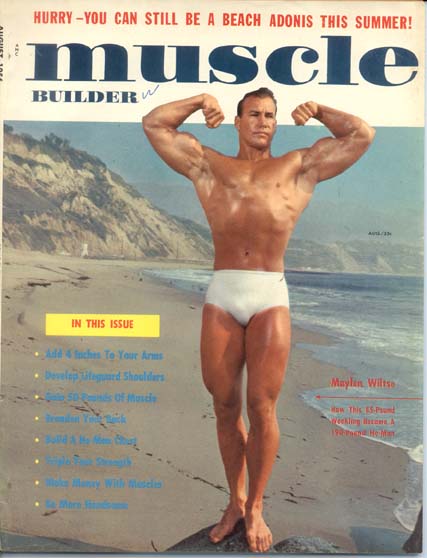 Article Taken From This Issue (August 1956)

It's true that the weightless deep knee bends of the Hindu Wrestlers build an amazing endurance and leg development, but exactly how valuable are they?  Here's an interesting comparison between the early Indian training methods and the leg routines of our own bodybuilders to help you decide.

It was because of my meeting Al Baffert, who had just returned from India, that prompts me to offer a discourse on squats. Al wrestles under the nom de mat of Andre Adoree and is an International wrestler. Al Baffert.
On the Right. 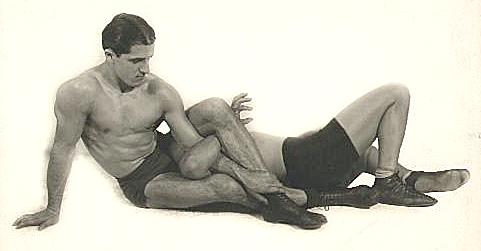 That is, he prefers to do his stuff in foreign lands. More money there, and greater appreciation for scientific wrestling. And being a heavyweight himself, he has met the best of them, not only in India, but in Japan as well, and when working in foreign circles he, of course, must wrestle according to the rules of the particular nation. Al was telling me about The Great Gama Baksh (above), who was undoubtedly the greatest wrestler that India ever produced. Gama is now about 75 years old, and what amazed me when Al made mention of him and his training is that Gama still does 2,000 squats daily!

And I also learned that all the Indian wrestlers perform between 5,000 and 6,000 free squats every day. They retire at sunset and wake up at sunrise, are vegetarians, never smoke nor drink, and practically live a life of self denial and restrictions, all for the sake of wrestling.

All those squats, naturally, supplied me with deep interest as it formed an indication of whence come those thick and well rounded powerful thighs which are possessed by those Indian wrestlers. It is obvious that squatting and squatting and more squatting is responsible for the thigh bulk, the endurance and the lung power, all which make the East Indian wrestlers the best in the world in their style.

It takes, them, however, from four to five hours to complete all those thousands of daily squats. They do them in sets of 50 or 100 and use no weights - just free erect squats with determined speed. At first thought, one might entertain a belief that too much squatting would have a tendency to tear down muscle tissue faster than it could be replenished, but proof is to the contrary when considering the results obtained by the Indian wrestlers. Your eyes must surely must focus twice upon their thick, rounded thighs, some of which have been shaped to enormous proportions.

There have been some fellows in California who have adopted this Indian style of thigh training, and immediately entering my mind is one, Henry Lenz, who used to be an ordinarily built fellow until weight training improved him sufficiently so that he could enter physique contests. I believe he has won a few of these. Yet Henry's thighs were never huge. They were what might be termed ordinary, though not small.

So, Henry decided to try the Indian multi-squat thigh training without resistance of any kind. Gradually he increased his sets of 50 until he was performing 1,000 free squats every day. The result was that his thighs became very large, reaching 26 or more inches around. But Henry's thighs did not take on that barbell look such as is formed from squats done under a heavy weight.

In other words, Lenz's thighs became huge and had large sweeping curves, yet did not possess the muscle separation and shape a barbell trained man's thighs take on. I am not criticizing Henry Lenz, but simply stating the difference in results from training with weights as opposed to bodyweight leg training. I firmly believe the thighs of the East Indian wrestlers could become absolutely enormous if they were to utilize weight work in conjunction with their numerous free squats, but perhaps they do not wish such legs, and prefer to work for the required and essential endurance.

Anyway, it proves that a lot of squats must be done if anyone expects to obtain thick, well-shaped thighs, and, of course, greater lung power. The chest-box enlarges, you know, from continued squatting, as all leg work plays upon the respiratory system.

Yet I deem it better to perform these squats while using a barbell that can be made heavier as the thighs quickly become stronger. Such progressive work cannot help but increase the size of the thighs; but, better yet, will supply the contour, the separation in the quadriceps, and save considerable time and effort for the bodybuilder.

I have  continually advocated half-squats, and even one/third-squats as being best for better thigh shape, and this statement is based on many reasons. One of them is the fact that all Olympic lifters have splendidly large thighs. Few weightlifters use the squat during their cleans to shoulders, and if more and more may be adopting this squat style with the cleans, I am safe in saying these same fellow possessed extra fine thighs before they switched from their former style of split cleaning to the new squat style.

In all of the three standard Olympic lifts, the thighs bend about one-third of the way, while a few may bend half of the way towards a full squat. This half-bend, or one/third-bend, whatever the case may be, supplies all the tension to the upper portion of the thighs and gradually develops more curve to that upper section. To continually squat into a full or complete movement will give more bulk directly above the knees.

Of course, the full squats also work the whole quadriceps muscles, yet most of the effort seems to center directly over the knees in this full squat. Many fellows have wonderful thigh muscle right above their knees yet lack sufficient center-thigh curve to give them that outstanding look. Hence, I deem it wise to perform full, half, and one-third squats during each workout so as to work those quadriceps at various positions.

And another boost for barbell squatting is that it saves much, much time; whereas 1,000 to 5,000 free squats occupies many hours. Also, as mentioned, barbell-built thighs, done with low reps and many sets, will give the enthusiastic worker much better shaped muscular thighs. All you need do is study the photographs of well developed bodybuilders to supply the answer. Also, observe the thighs of weightlifters for a second reply.

Barbells will also place greater pressure upon the calves because of the heavy weights used while squatting, and consider the lower leg contractions made during heavy squatting. Of course, added work must be given the calves for higher levels of development.

So, while I admire the thighs of the persevering Indian wrestlers, I cannot give such methods my personal recommendation unless endurance is all you wish to acquire. Barbell-built thighs are much more powerful than any thighs enlarged solely by the use of free squats. Proof of this may be had in all the 400, 500, and 600 pound squats being performed by bodybuilders here in America. I need not mention Paul Anderson's heavy squats or those of superman Doug Hepburn, for I'm sure you know of these feats already. 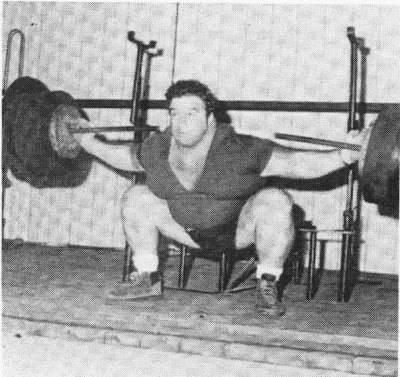 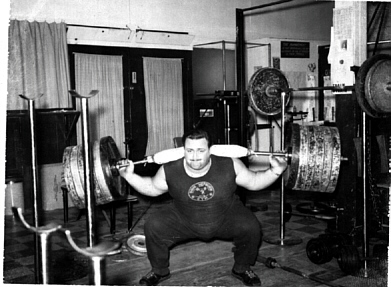 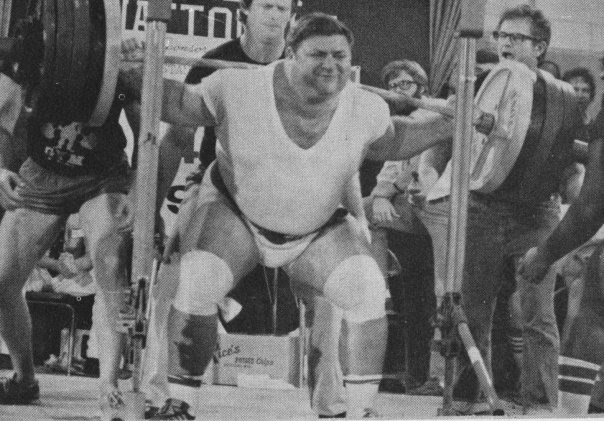 The trouble with all training without weights is that one is liable to find easier ways of doing the movements. With a very heavy barbell, taken off the rack, there's no way of 'lightening' its weight once you place it on your back. The weight is the same throughout the whole process of squatting. A heavy squat will place severe strain on the thigh muscles as well as the hips and calves. And the back receives its fair share strain also, for no one can perform heavy squats without strengthening the back.

So, if you wish to try those Indian squats and gradually work up to five or six thousand a day, such is your privilege. You must, however, have a lot of time on your hands. I really believe that the time and energy required to work up to large numbers or free squats could produce much better results if directed toward heavy barbell squatting.

I might add that I relate from some personal experience, for once upon a time I too was one of those free squatters, but it got me next to nowhere. But later on when I took up barbell squatting I noticed results in a very short while, using from 175 to 200 pounds during a workout, and in those days a 300 pound squat was considered a good one. Now, however, squat poundages have skyrocketed, along with levels of thigh development.

Time changes, yet I doubt if there will ever be a change in the present method of heavy barbell squatting for rapid thigh improvement, unless it means the use of far heavier poundages. It would not surprise me to learn five years hence that a 500 pound squat is but a common leg movement . . .