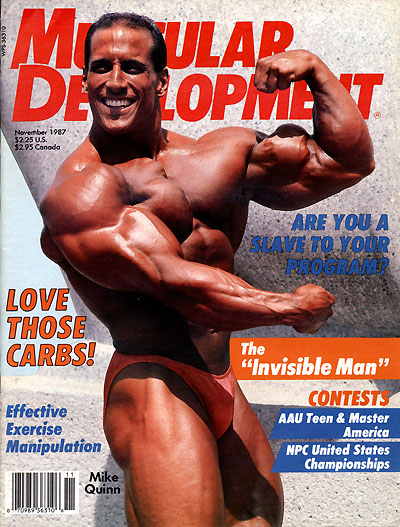 Note: At the time of this issue's publication Jan Dellinger was now Editor in Chief and John Terpak was listed as Publisher. Dr. Ken Leistner was a frequent contributor to the magazine, along with several other notables in the field of strength, bodybuilding and athletic training.

A well-balanced physique must be just that . . . balanced! Nothing looks as odd as a man (or woman) with well-developed pectorals, deltoids, arms and abdominals contrasted by a flat and underdeveloped back. Unfortunately, even dedicated bodybuilders often give only cursory notice to the upper and lower back musculature -- forgetting that the real foundation of one's physique is the back, hips and thighs. And for those more interested in the Powerlifts, or other general feats of strength, the upper and lower back musculature must be developed in proportion to the other upper body muscles in order to give supportive ability to any weight that is supported at the waist or overhead.

The athlete -- the football player, in particular -- must concentrate on developing the neck and upper back areas for protection from injury. Anyone who walks on a football field must accept the possibility of injury. Unfortunately, injuries involving the neck region can produce a lifetime of incapacitation. For this reason, many of the intelligent strength coaches and athletes make neck training a priority.

However, they often forget to include equivalent work for the upper back. Actually, the musculatures of the upper back and shoulders are the areas which transmit much of the force after contact is made with the head. Unbelievably, though, football coaches -- and frequently coaches of other types of contact sports -- understand the need for hip, thigh and lower back work, but relegate the upper back and shoulder work to afterthought status -- or upon completion of the almighty bench press. The fact still remains, though, that concentration on these vital areas will not only add impressive muscle to the upper body, but also contribute to one's deadlifting ability and overall strength increases.

It's easy to accept the fact that many athletes and physique men put less energy into upper back training, but deltoids . . . the bodypart that sets off the upper body? Most physique people strive to be as 'wide' as possible, forgetting -- or not wanting to accept the fact -- that torso width is very much determined by the length of the clavicles (collarbones). Hence, those blessed with proportionately long clavicles attain shoulder width more easily. So the only recourse for those with short clavicles is increasing the volume of the deltoids, which, in turn, increases the width of the shoulder musculature.

Typically, the majority of physique men and women pursue a course of lateral deltoid development, which contributes to shoulder width, but downplays the role of shoulder thickness and overall strength. In order to have maximum visual effectiveness -- and, of course, maximal strength expression -- all three parts of the deltoids should be developed. Be advised that those who spend an inordinate time on the bench press will have a disproportionate amount of anterior (front( delt development, and will find that it takes a real effort to similarly develop the posterior portion, which contributes to the appearance and function of the entire upper back.

These are the muscles that draw the scapula (shoulder blades) together, a movement of extreme importance to competitive deadlifters. The scapulae must be stabilized during the entire lift, being drawn together during the lockout phase if one is to maintain the proper relationship between the hips and shoulders -- as well as lock the upper extremities into an efficient pulling position, hold the bar as close to the body as possible throughout and best utilize the initial thrust of the hips and thighs as the bar leaves the floor.

The rhomboids and middle and lower fibers of the trapezius muscles are the primary shoulder blade retractors. However, it's easy and wise to work scapulae elevation -- which involves the levator and trapezius -- with as much determination as the retractor phase -- which involves the same muscle groups in conjunction with the latissimus dorsi, pectorals and serratus anterior. Thus, working all aspects of scapulae movement will encourage growth in the upper back region, while most functional strength training movements and competitive lifts will benefit from work given to the retractors and elevators.