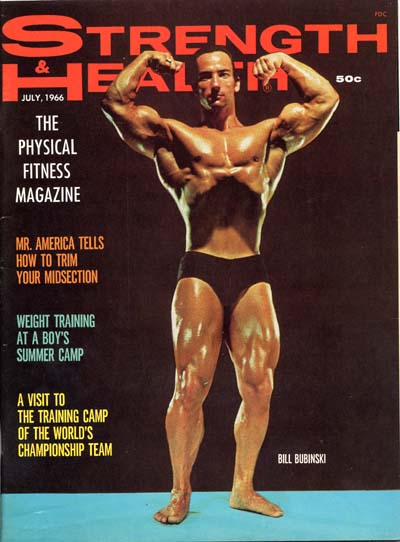 If you followed last month's article, you should now be in the process of bulking your upper body. Stay with it one more month.

All the programs from now on will be advanced. They'll produce results, but they'll be severe. Because of their severity, it's absolutely essential that you eat properly.

This month, we're going to talk about diet. Diet generally, and the high protein diet specifically.

Nutrition can be a complex thing. You can bog down in a mess of technical detail. "This isn't necessary. We'll keep it as simple as possible so you can actually apply the principles to your training.

The two basic essentials for building muscle are exercise and diet. Each of them represents approximately half the tools you need to transform yourself into a Hercules. You can get some results either one of them. You can develop a little muscle with exercise alone, and you can even develop an little muscle with diet alone, but this half-way application only restricts your eventual progress. Diet and exercise used together, as they're supposed to be, will positively double your gains. They're the combination that will blast you ahead to the kind of strength and development you want.

You're already exercising correctly, so we'll confine ourselves to diet this month. The diet we'll be talking about is the high protein diet for building muscle.

There's been a lot of talk from the medical authorities on the value of the protein diet, but, for the average lifter there's two major difficulties with their advice. First of all is the fact that the advice is aimed generally at people who never lift anything heavier than a ham sandwich and couldn't care less about building muscle.

The amount of protein usually recommended by nutritionists is too low to force big muscle gains. Most of the diets are based on about one-half a gram of protein per pound of body weight per day. There's nothing wrong with this amount. It'll build brimming health, and you might even end up looking like Lloyd Bridges. But you've got to consume one heck of a lot more protein if you want to end up looking like Bill Pearl.

If you want big arms and all that goes with them, then remember this -- a high protein, muscle building diet for weight trainees should contain about one and one half to two grams of protein per pound of body weight per day, based on what you want to weigh.

The second major difficulty with most diet advice is that it's too complicated. If you tried to calculate the exact amount of protein in everything you ate, you'd be ready for the laughing academy in about two weeks.

The practical way is to average out the protein content in the main sources of first class protein only. Bring these to round numbers, and you can remember it with no trouble at all. Get your daily requirements from these sources. Then if you pick up a few grams in the rest of the stuff you eat, figure it as a bonus and don't worry about it.

You'll have trouble eating enough regular food to get in that much protein. That means a supplement is a must. The best one I know is the "Get Big Drink" outlined in the November, 1965 issue of Strength & Health. It's based on Hoffman's Gain Weight and milk, and contains from fifteen to twenty grams of the best protein per eight ounce glass. Take it every day if you're serious about building up.

I was explaining this to my daughter's boy friend the other night. I was toying with my coffee while he cleaned up his fifth plateful.

He slopped up the last of the gravy with a piece of bread, gobbled down the bread, licked a dab of butter off his finger, and smacked his lips like a tidal wave hitting the beach. "Man," he said. "That was scrumptious."

He rocked back in his chair. "Yessirree, Dad. You set a mint spread."

I checked over the table. It looked like the locusts had hit it.

He popped a stick of gum in his mouth, and dropped the wrapper on the table. "Well, Dad," he said. "How's business?"

"Marvin," I said. "The only interest you got in this world is free meals, but if you wanta know, business ain't too b." I looked at the table and added, "Course I got a heavy overhead."

He looked insulted. "Dad, you know you're always talking about stoking it away in those articles of yours."

"I shoulda mentioned something about paying for it."

"Student?" I said. "You're a professional bum. I was supporting a family when I was your age."

"But, man." he said. "Times change. This is the age of industrial specialization. I gotta study if I'm gonna fill a productive role in society, don't I?"

"I guess so," I said. "What are you studying? Basket weaving?"

"For the gym," he said. "Six of the boys are training with weights at school, see. And I got them all conned into coming down to train at your place."

I thought about it for a moment. "Tell me, Marvin. Have any of these friends of yours got any money?"

"Money?" he said. "You mean like bread? Man, these cats don't hang up on such commercial values."

I thought that one over. "I see." I got up and went into the kitchen and brought back a scratch pad and pencil. I handed them to Marvin.

"Marvin," I said. "Your friends don't have to join the gym. I'm going to give them some free advice instead."

"Not really, Marvin," I said. "I gotta be honest with you. I figure this'll be a lot cheaper than having six more like you camped on my doorstep."

I drank the rest of my coffee. "Now listen, Marvin. Tell your friends to keep on with whatever training they're doing at the moment. We'll get to that some other time. But right now, I'm going to show them the high protein diet for muscle building. And you can tell them this diet will revolutionize their gains no matter what program they're doing."

He was scribbling like mad at the scratch pad.

"You see," I said. "The high protein diet in the sense I'm talking about is a fairly recent innovation. Most guys either don't know about it or else won't eat the amount of protein you need to jar you into really big gains."

He made a final squiggle on the pad and looked up.

"Marvin," I said. "What the heck are you doing? You can't possibly be writing all this down."

He held up the pad. It looked like a chicken had walked over it. "Shorthand, Dad. Like I'm taking you down verbatim."

"Shorthand?" I said. "Marvin, I didn't know you could take shorthand."

He grinned. "It's like nothing, Dad. I took it at school."

"Well," I said. "This is quite a surprise. Maybe I've been wrong about you, Marvin." I clasped my hands together in front of my stomach. "Okay. Now that we got a system . . ." I leaned back and put my feet up on another chair . . . "take this down."

"The body is composed basically of protein. Without sufficient protein, the body cannot repair and regenerate itself, much less enlarge its muscular content. It stands, therefore, as a cardinal rule of weight training, that, if you want to enlarge your muscular bulk, you must provide the body with ample amounts of this vital nutrient."

"Thank you, Marvin," I said. I cleared my throat. "Just read that back to me please."

He picked up the pad and looked at it some more. He looked at it for a long time and then he gave me a little smile. "Funny," he said. "I was always better at writing shorthand than reading it."

I sat up straight and snatched the pad out of his hand. I ripped off the top sheet and threw the rest back at him. I glared at him for a while and then said, "Marvin, if those friends of yours are as stupid as you are, I better keep this simple." I thought for a moment. "First of all, you can tell them for a rough guide to eat all they can of anything that's a direct or indirect animal product."

"No," I said. "I don't. I mean meat, fish, fowl, eggs, cheese, and milk or anything made with it." I shifted around. Get a nutrient counter and look up the protein content of the kinds of foods I just mentioned."

He sat back and I sneaked a look at the pad. His writing didn't look much better than his shorthand. "I got it, Dad," he said. "Now what?"

"Tell your friends to use the counter to figure out their protein intake."

"There's protein in other food, isn't there?"

"Sure, but why complicate it? Nobody's gonna memorize the protein content in all food, and you can't be  packing a notebook and slide rule to every meal. Just tell your friends to calculate their protein intake from the book, and if they get some extra protein in the other stuff they eat, so much the better."

"Sure. But as long as they're trying to gain fast, that's the only way to do it."

"Good. Now, this is based on six meals a day. They eat their regular three meals and have a snack in between and at bedtime. That way they keep first class protein in their system all the time, they assimilate it better, and they don't stretch their guts too much. Now, here's a sample menu to show you what I mean." Marvin's eyes lit up when I said menu. "Write this down."


"Now," I said. "They don't necessarily have to stick to that, but it'll give them a rough idea."

"Okay." Marvin folded the paper and stuck it in his pocket. "One other thing, Dad. You didn't mention the cost of the food."

I let my eyes get big and innocent. "cost of the food, Marvin? I don't quite understand."

"Well, you know," he said. "Like the stores ain't giving it away. Food's expensive, ain't it?"