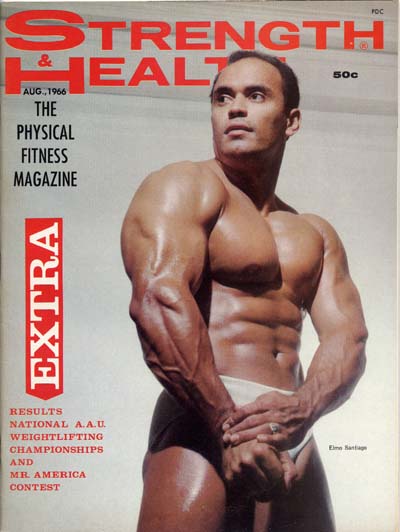 I used to play in a lot of bridge tournaments. It was a nice sport for a weight lifter. It gave your brain a real workout, and you could play it sitting down.

I quit when it got too specialized. You've got to specialize to be a winner, but it was taking too much of my time and changing my way of life. Even my conversation was getting restricted. I'd always been able to babble away like everyone else, but I got to the point where I was walking around in a daze and grumbling that I hadn't had a hand since Columbus was a cowboy.

The specialists were winning, but it took me g time to admit it. I took a look at my bookshelf one day. It used to bulge at the seams with magazines full of equally bulgy young ladies. Now it was filled with books promising fame, fortune, bridge mastery, or all three for half an hour's study a day. About this time, I realized that, in actual fact, bridge mastery took a mind like a computer, the stamina of a long distance runner, and a complete withdrawal from the outside world. I gave it up and went back to "The Flintsones" but I'd had a good lesson in the necessity of specialization.

This is the age of the specialist. You've got to specialize if you want to reach the top in any field. You can't be like Leacock's young man who leaped on his horse and rode off madly in all directions [Gertrude the Governess by Stephen Leacock]. Not any more. You can't spread yourself out over a lot of things and win at them. Today, you gotta bear down hard on one thing, whether it's playing bridge, running a record mile, becoming a lifting champ, or winning a physique title.

It's particularly true in the matter of winning a physique title.

At the stage you're at right now, legs and back are still the vital areas. Your ultimate strength and development depends on the foundation you build in your legs and back. There's no shortcut. Don't let anybody tell you there is. If you branch out too soon into specialization on the smaller muscle groups, you'll only limit your eventual progress. You might end up with a nice build and fair degree of strength, but it won't be herculean. It'll be nothing like what you'll end up with if you follow this series correctly.

If you really want to power appearance of a Hercules -- something along the lines of Pearl, Park, or Grimek -- then your next program has got to be a short period of intensive specialization on your LEGS AND BACK. The program will increase the strength and size of those areas way beyond that of the average trainee, but it'll take specialization to do that.

One of the early specialists on leg and back work was a lifter of about 25 years ago named Louis Abele. Abele weighed around 220 and totaled close to 1000 pounds in the three Olympic lifts. 1000-pound totlas in those days read like something out of Jules Verne.

Abele was maybe the first to demonstrate the value of leg and back specialization. He was doing repetition squats with 500 pounds when 300 sounded pretty good. Abele never did any bodybuilding that I know of, but he had a physique as shapely as most of the physique boys at that time and he was a hell of a lot stronger. With a short period of straight bodybuilding he could have won most of the major physique awards.

Abele based his success primarily on several periods of intensive specialization on his legs and back.

You'll work out four days per week on this program. You'll do the Leg Program on Mondays and Thursdays, and the Back Program on Tuesdays and Fridays. That gives you Wednesdays in between and the whole weekend to rest up.

You might as well realize right now, that if you work like you're supposed to on this program, you'll need that long to rest up. Leg and back specialization, done properly, is the hardest possible type of training. Fortunately, it's also the most result producing. Do this program like you're supposed to, and you'll gain rapid and visible improvement both in muscle bulk and strength.

A lot of trainees don't appreciate the possibilities inherent in leg and back specialization. Consequently, they don't train anywhere near hard enough at it. They think they do, but in actual fact they don't. When I say train hard, I mean HARD. You've got to use auto-suggestion as outlined in an earlier article and drive to the absolute limit.

You've got to blank out every other thought from your mind except doing the correct number of reps with constantly increasing poundages. That's what it takes.

I remember watching Reg Park work out one time. He was doing squats. He had half the weight in the gym draped across his shoulders and the owner biting his nails in case the floor broke. You never saw such intensive effort. Park did rep after rep and each one looked like the last.

One of the guys watching nudged me. "Good grief," he said. "Have you ever seen anybody work harder than that?"

We watched Park finish his workout. Then we went out for a bite to eat and the guy said, "Do you really think it's necessary to work that hard?"

He thought for a moment. "I dunno. I never worked that hard, but I got a few muscles."

"Sure," I said. "You got a few muscles. But you look like somebody's mother-in-law alongside of Park."

The guy munched his sandwich with a pained look.

"That's what makes the difference," I said. "Anybody can work out easy with moderate weights and develop a fair body. That's what most trainees do. But HARD work on the RIGHT exercises is what separates the elite from everybody else.?

I bit into my sandwich and chewed it down. "What do you use for squat?"

He looked like he was thinking about it, so I continued. "Reg Park was at your stage of development at one time. He probably squatted with 250 and had a corresponding development. But the difference with Park is that he had the ambition and mental drive to keep forcing the weight even after he had a nice build. He wanted the best, so he kept adding weight a few pounds at a time, and he worked hard enough to lift it. Now he looks like Superman."

The guy finished up his sandwich. "You figure that does it, eh?"

"Right," I said. "Correct exercises, tremendous weights, and hard, HARD work. It's as simple as that."


Work hard on this program.
Lift big weights, and you'll be taking a long stride towards looking like Reg Park.

On Mondays and Thursdays you'll be doing the leg work. Do the following:

1) Squats -
You're probably getting tired of hearing it, but squats are still the big exercise for bulk and power. Do them 5 sets of 5 reps. Use a light weight for the first set to warm up. Add weight for the second set. Jump to your top weight for the third set and stay at that weight for the 4th and 5th sets. If you're not using over 300 pounds by now, you haven't been working near hard enough. Set the figure of 500 pounds in your mind and work towards it. You can't build up a herculean body on any less. If anyone says you can, they're either trying to sell you something or else talking about a body one heck of a lot less herculean than the one I'm talking about.

2) Hack Squats -
Don't confuse these with hip lifts. Do 4 sets of 12 reps. Hack squats are far and away the best exercise for building the muscles just above the knee, and giving the whole thigh a bulky, shapely look. Put a three inch board under your heels and go all the way down till you're sitting on your calves. Start light until you get used to the exercise, but then increase the poundage rapidly. Work so hard you get stuck at the bottom on the last rep.

4) Donkey Calf Raises -
Big calves are a must for shapely legs. Do 5 sets of 20. Work until your calves absolutely scream.

5) Calf Raises on Calf Machine -
Put a board under your toes so you can drop your heels way down and stretch the muscles. This builds the low bulk on the leg where you want it. Do 5 sets of 20. Use enough weight so you barely make the last rep. Your calves should feel like they've been blow-torched when you finish.

6) Front Squats -
You can either Clean the weight or take it off the rack. Put a 2 x 4 under your heels and keep your back flat, your head up, and your elbows high. 4 sets of 8, and it won't help unless you pile on the plates.

That completes the leg workout. Work 10 times as hard as you ever did before. Give it all you've got and then some. When you finish the workout, you should literally have trouble climbing a flight of stairs.


On Tuesdays and Fridays do the back work:

1) Prone Hyperextensions -
4 sets of 10 with all the weight you can handle. Grit your teeth and really push the poundage.

2) Power Cleans -
5 sets of 5. Put a real effort into the second pull. You should be able to work up to a respectable Clean. They build terrific explosive power.

3) Deadlifts -
This old standby is the granddaddy of them all for building pure, overall power. Start light and do 3 reps. Add weight and do 3 more reps. Keep adding weight for each set until you can't make 3 reps. You should get about 8 sets out of it.

4) Rowing -
This is another old favorite and terrific for back development if done properly. Take a close grip and pull the bar up to the lower abdomen -- about to where the legs join the trunk. Arch your back when the bar touches your body and round it when the weight goes back down. Let the bar hang dead on the bottom and get a stretch in your lats. Do 5 sets of 12.

5) Chins Behind Neck -
Take a wide overhand grip and pull up till the back of your neck touches the bar. Get a dead hang on the bottom after each rep. 5 sets of 10, and attach weights around your waist for added resistance as soon as you can.

6) Regular Chins -
Take a normal overhand grip and pull up till your chin extends over the bar. Dead hang on the bottom and 5 sets of 10. Chins are a favorite lat exercise with Bill Pearl, and Pearl has unquestionably one of the greatest bodies of all time. You can be sure that when he does chins, he doesn't dawdle halfheartedly through them. Don't you either!

Anyone can chin themselves half a dozen times in a sloppy fashion and have no muscle to show for it. But not many can chin the way you're supposed to, and those that can have plenty of muscle to show for it. Build up the reps to the required number as quickly as you can, and then start strapping weights around your waist. When you're doing proper chins with with 30 or 40 pounds tied on, your muscles will start looking more like Pearl's.

Do a light set of pullovers after the squats, front squats, power cleans, and deadlifts.

Don't forget to follow the high protein diet as outlined in the last article. Keep your protein intake way up or you won't gain as much.

Get lots of rest and sleep. Give it everything you've got when you're working out, but when you leave the gym get all the rest and relaxation you can.

Work HARD! Harder than ever before. Add weight every workout if you possibly can. Make it a life or death deal.