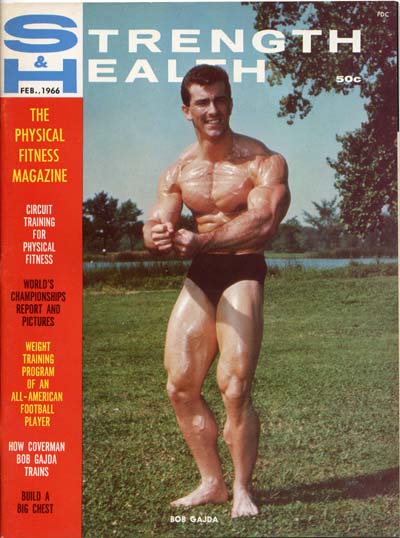 First Published Feb. 1966 in this Issue

One of my favorite folk groups was on at the coffee house the other night. Ollie and I took the wives over. We got a table close to the stage and ordered sandwiches just as the show started.

The warmup was a young girl about nineteen who played guitar like Joan Baez. She started with 'John Riley.'

Ollie whispered something to me. I didn't catch it. I leaned over and he said, "Two bodybuilders just came in."

I nodded and sat back. The girl finished her song.

"Do you know them?" Ollie asked.

I looked around. The bodybuilders had a table by the wall. You couldn't miss them. Both were advanced men wearing T-shirts so tight they looked like they were painted on.

"You sure can tell they're bodybuilders, can't you?"

"You sure can," I said. "Who else'd walk around in the middle of winter at eleven o'clock at night in a T-shirt?"

The girl did another song. I'd never heard it before. A protest thing about children and the Bomb.

"Do you want to go over and talk to them?" Ollie asked.

"Ollie," I said. "Do you know why those two yo-yos are wearing T-shirts?"

"Comfortable, heck." I looked over. One of them had his elbow resting on the table with his arm flexed so hard his hand was shaking. "They're a couple of showoffs. The trouble is they're making weight training look as kooky as they do."

The girl sang a couple more folk songs. She got a nice hand and left the stage.

"Listen," Ollie said. "Why do you get so mad about bodybuilders showing off?"

"Cause they give it a bad name." I said. "People think the whole sport's as punchy as they are."

"Could be," Ollie said. "You think it really hurts?"

"Sure," I said. "Exhibitionists like that are the main reason lifting's so misunderstood by the general public."

"They really stand out, don't they?"

"Well, who wants to be associated with a couple of nuts like that?"

"What do you think people's opinion of them is?" Ollie asked.

The group bounced on stage and wheeled into place before the mike. A young woman in a blue dress and two young men in dark slacks and open-necked blue shirts packing guitars. They opened up with 'Tell It On The Mountain.' The noise bounced off the walls. They picked up the tempo and rolled it out and everybody started clapping their hands in time. They hammered to a peak and then chopped it off fast.

Ollie leaned over and whispered to me. The applause was deafening. He whispered louder. "Look over there now."

One of the bodybuilders was standing up with his lats spread to the limit while he looked around the room. I glanced quickly at the other tables. Half the people were looking at him and whispering.

I nodded at Ollie and turned back to the stage. The group did a soft number, harmonizing real nice. They got terrific applause again. They ran through a half a dozen more songs, did four encores and left the stage.

Ollie and his wife got up to leave.

"Okay with me," Ollie said. We looked over at the bodybuilders.

One of them was strutting to the washroom with his chest stuck out like a pouter pigeon. The other was standing up smoothing his hair with his biceps flexed.

"Go turn off that spotlight on the stage, Ollie. He'll be up there posing in a minute."

Ollie grinned. "Want to invite them over to our table?"

"They really bother you, don't they?"

Okay," I said. "Figure it this way. Do you know anything in the world that pays dividends like weight training does?"

"How do you mean?" said Ollie.

"I mean, do you know any other sport that offers anything like the strength and health and development you get from weights?"

"Right," I said. "Cause they're aren't any. Nothing gives you the physical benefits weight training does."

"Sure. So, according to that, weightlifting should be the most popular sport in the world. Lifters oughta get the recognition boxers and ball players do. It should rank tops in the public eye."

"I suppose so," said Ollie.

"Right. But it doesn't. Lifting's so low in popularity they don't even mention it in the sport page half the time. The average guy on the street doesn't have a clue about weight training or what it can do for him."

"It's tough all right," Ollie said.

"Tough?" I said. "It's bloody well tragic. And do you know why weight training's so misunderstood and why it's not more popular than it is?"

"I'll tell you why," I said. "It's because of nuts like those two over there prancing around in their T-shirts with their muscles flexed making complete fools of themselves."

"Don't get so mad about it," Ollie said. "You'll ruin your evening."

"No use getting upset," Ollie said. "How about a sandwich?"

"We just finished one."

"So let's have another."

Ollie caught her eye. She came over and we ordered sandwiches and coffee. I looked over at the bodybuilder's table again. One of them had his biceps flexed and the other one was feeling it.

"Look at those two mutton heads now," I said. "Everybody in the joint is giggling at them."

"Take it easy," Ollie said. "You're getting red in the face."

"I don't doubt it," I said. "I feel all red in the face." I turned back to Ollie, "You know," I said, "every course in weight training should have a section in it telling bodybuilders how to act after they develop their bodies."

"It's a good idea," I said. "I've read every course and magazine on weight training ever published, and I don't recall one single word about developing a little modesty or acting like a normal human being in public."

I looked over at the bodybuilders again. "It's a matter of public relations. Once a guy builds up on weights he looks different. He's outstanding in any crowd. He should conduct himself so's he brings credit to the game."

"I guess you're right," said Ollie.

"Sure. With the knowledge we've got today a guy can look like Hercules if he wants to. It doesn't take long. But he's gotta remember he's on display every time he walks out the door. Everywhere he goes he's an advertisement for weight training. If he acts like a conceited slob it's bad advertising and we don't need any more of that."

"So what's the answer?" said Ollie.

"I think it's up to the magazine owners," I said. "They oughta harp on the subject for a while."

"They should stress a sort of conduct code for bodybuilders," I said. "Some kind of reasonable behavior. We gotta start projecting a better image or we're dead."

"What would you suggest?" said Ollie.

"I dunno for sure," I said. "But I got a rough idea." I looked at the bodybuilders. One of them was bounding his pecs like he couldn't stop his muscles from rippling. "Most important of all they should stress modesty. Nothing irks people more than conceit."

The waitress brought the sandwiches and coffee. "When a guy develops a herculean physique he's gotta be prepared to accept certain responsibilities that go with it. He's gotta do a few things he maybe won't like."

"Well, take clothes," I said. "No bodybuilder should walk around in a tight T-shirt unless it's so hot everybody else is wearing one. Even then it'd be better off if he wore a loose shirt."

I took a bite of my sandwich. "He should be neatly dressed all the time. There's no excuse for slopping around in a dirty sweatshirt with the sleeves torn off just so your arms'll show."

"Also," I said. "He should be clean and presentable. Some of these guys don't even wash their face from one week to the next."

I took another bite. "And they shouldn't be talking about their looks in public. It's like a bunch of girls. Nothing sounds worse than two bodybuilders babbling away on a crowded bus about pecs and lats and defined abdominals."

I washed the sandwich down with a mouthful of coffee. "Another thing is natural posture. Spreading the lats is bad enough, but some bodybuilders are so tensed up it looks like they're trying to lay an egg."

"I see what you mean," said Ollie.

"The beach is maybe the worst," I said. "Boy, do I hate to see a bodybuilder mincing around on the sand. Some of them actually practice posing there. An advanced man looks impressive enough. He should act like everybody else at the beach."

"You figure it's really that important?" said Ollie.

"I do," I said. "I really do. Those egomaniacs are the biggest stumbling block we've got."

"We worry about lifting's popularity, and we come up with all sorts of excuses for it," I said. "But some of our own guys make most of the trouble. Lifting will always be a second rate sport if we don't smarten up."

"You got any more ideas ideas on the subject?" said Ollie.

"Sure," I said. "Loads of them. But I'll tel you some other time, they're starting the next show."

The young girl climbed up on the stage again and smiled at the audience. She'd changed into a black skirt and a plain white blouse and her dark hair fell over her shoulders. They darkened the room and bathed her in white light from the overhead spot. She started a pretty arpeggio on the strings and sang about the radioactive fallout in the rain.