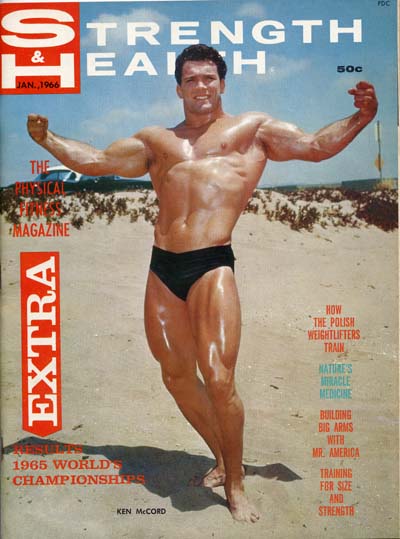 Originally published in the January 1966 issue of
Strength and Health magazine.

You get a big influx of stiff upper lips for the Games. They puff their portly way up into the stands and watch the athletes and sit around in their gray flannels and crested blazers and mumble brave things about the colonial system and the thin red line and how the sun never sets on the grand old flag, chaps.

But you also get some awfully good athletes. In '54 they had two milers named Bannister and Landy who became the first men to run a sub-four minute mile in the same race. They called it the Miracle Mile.

And there was also a man named Harold Cleghorn.

Prior to the '54 Games, Cleghorn held a British Empire lifting title. He was a kind of lean and hungry looking heavy, not much bigger than a light-heavy and his lifts weren't really that good. Furthermore, he was no bare-faced boy. He was in his forties and it looked like he'd had the treatment.

Then he came to Empire Village and the rumors started floating around. The story was that he'd gained about 50 pounds of muscle and increased all his lifts 10 or 20%.

This is pretty sticky jazz for a man Cleghorn's age. I decided to check for myself.

I drove over to the Village and found the building the lifters were training in. The officials had them jammed in the basement as usual. I walked down a couple of flights of dusty stairs, along a cement corridor, through a big wooden door into the lifting room and there was Cleghorn.

You couldn't miss him. He looked like a big Grimek. And it looked like the rumors might even be true. He weighed about 250 of the most impressive pounds I'd ever seen.

He was doing some heavy squats. There weren't many visitors that day so I went over and talked with him.

He's very polite and friendly. He talks in a soft deep voice with a faint down-under accent.

"Yes," he said. "Finally." He was sweating hard and he wiped a big hand across his forehead. He's got wavy black  hair that's receding a bit in front.

He loaded some more weight on the squat bar. "I don't want to cool off."

He dipped under the bar, stepped away from the rack and did five reps. He put it back on the rack and smiled at me. "Very tiring."

He was puffing a bit. He strolled back and forth taking deep breaths. He looked like he could stroll through a cement wall.

He went back to the rack and put some more weight on the bar. It was over 500 now.

He smiled politely. "Thank you. I didn't used to be."

He did another set of five. He's got a chest like a boiler. Every time he inhaled it bulged out like he was going to pull a vacuum in the room.

I waited till he finished the set and got his breath back.

"What caused all the progress?"

He touched the bar on the rack. "This."

"Boy oh boy," I said. "You've really improved. I can hardly believe it."

He looked a little sad. "Thank you. It's a bit late for me, though."

"I'm a  little old to start a lifting career. I wish I'd known ten years ago what I know now."

"You mean about heavy exercise?"

"Yes. I think I'd have done a good deal better."

"No. I used to squat with three to four hundred pounds. I thought that was enough."

"You mean you just stayed with that weight?"

"And all this improvement came when you started heavy squatting?"

"Well, Harold," I said. "Late or early I think you've done a wonderful job. Furthermore, you're a real credit to the game at any age."

"Thank you," he said. Very polite. "Thank you very much."

Two nights later, with the overhead lights flooding down applause thundering around him, he stepped onto the lifting platform and broke the British Empire Heavyweight record with his first Press.

You're going to start now on the first of the more advanced bulk and power programs. It'll be based on heavy exercise.

Wear a full training suit while you're working out. Buy one if you haven't already got one. You'll be working heavy and you've got to keep your muscles warm.

You'll be sweating a lot. Take milk or water during your workout. Drink all you want but don't take it too cold.

Your first exercise will be prone hyperextensions. You'll be using them as a warmup for your lower back.

Do them off a table or bench high enough to allow you to go all the way down. Arch your back when you come up and get the action in your spinal erectors. Don't worry about adding weight right away. Learn to do them properly first.

Prone hyperextensions are used extensively by Reg Park. He says they provide him with an effective warmup, protection for the lower back, nervous and circulatory stimulation and a psychological boost.

They also provide him with a set of spinal erectors like truck tires.

Next comes heavy squats. This is the exercise favored most by Reg Park. He's capable of squatting with weights in excess of 600 pounds. He's also one of the very few bodybuilders actually as strong as he looks. If you saw him in any of the Hercules movies you know how strong he looks.

You'll be doing 5 sets of 5 in the squats. Start with a weight 100 pounds below your best weight for 5 reps and do 5 reps with it. Add 50 pounds and do another 5 reps. Then add 500 more pounds and do 3 sets of 5 with that weight. Try to increase the weight 5 pounds on every set every workout.

Take three huge breaths between each rep. Suck in all the air you can and lift your chest.

Squats will be the big exercise in this program. Take a short rest between sets. Use the auto-suggestion trick we discussed before and drive your poundages up. Set your goals very high and don't settle for anything less. You've got to work up to around double bodyweight for 5 reps.

Stagger over to a bench and do light, breathing pullovers after each set of squats. Use 20 to 35 pounds for 20 reps and haul in air like it was going out of style.

Heavy squats and light pullovers are the combination for 50 inch chests.

Take a short rest before the next exercise. This will be front squats, or squats with the weight held in the Clean position. Put a 2 x 4 under your heels so you can stay erect and throw the work on the muscles just above your knees.

You can either clean the weight or take it off the rack to get it in position. If you're not used to front squats they'll probably hurt your wrists at first. Tough it out and your wrists will strengthen. Keep your elbows high and the bar well back on your chest and frontal deltoids.

Do the front squat for 3 sets of 10. Use your heaviest weight for the first set and drop it 10 pounds for each succeeding set.

The next exercise is the bench press. Most of you like these. Do them for 4 sets of 8 in a loose e. Use a slighter wider than shoulder width grip and arch your back a little when you're pressing.

Use 30 pounds below your best weight for 8 reps for the first set. Add 30 pounds for the second set and drop 10 pounds for each of the remaining two sets.

The bench press came on strong in recent years. It's probably the best all-round exercise for the chest and shoulder girdle. You should work up into heavy weights on it. Try for about 1.5 times bodyweight for 8 reps.

Do a lot of deep breathing between reps. Work it something like the squats.

You'll need a rest now. The next one is tough. Power cleans. Do them dead hang style for 5 sets of 5. Start with 50 pounds below your best for five reps. Add 25 pounds for the second set. Add another 25 pounds and do the final three sets with that weight.

Don't dip too much with your legs and don't move your feet at all. Get the pull with your thighs, hips, back and arms.

This is a pretty rugged exercise. Take it easy at first and work up gradually into heavy weights.

The next exercise is bent forward rowing. Do this for 5 sets of 10. Take your heaviest weight for the first set and drop it 10 pounds for each succeeding set.

Don't get into the habit of cheating on this one. No fair using the legs and lower back. Take a narrow grip and pull the bar all the way up to the lower abdomen. Arch your back high at the completion of each pull. Lower the weight all the way down and round your back with it. Let it hang dead and stretch your lats.

You can wind it up now with presses behind the neck alternated with incline bench dumbbell curls. Do them for 3 sets of 8. Use your heaviest weight on the first set and drop it each succeeding set. 10 pounds for the presses and 5 pounds each dumbbell in the curls.

If you have a tendency to get fat in the gut you can do one set of 25 leg raises and one set of 25 s. Don't do them with your workout. They're better done on your in-between days. Don't work too hard on them. All you want to do is keep your waist in hand while you're gaining weight.

The whole program, without the details, looks like this:

You'll find this pretty stiff if you work as hard as you're supposed to on every exercise. Make sure you get lots of rest and sleep.

You're trying to gain weight. Make sure you eat enough. We'll get into diet another time, but for now eat all the good food you can and take the gaining supplement in large amounts. Spread your meals out. You're better off to eat five or six small meals than two or three huge ones.

When you're working this hard it's wise to take a germ oil such as Energol. Take at least the advised amounts. You'll also do better with a high potency vitamin supplement.

If you go at this program in a sloppy fashion, you'll only get partial results. If you want partial results you may as well do something easier. Properly done, the program will kick back big gains but you've got to work at it.

Make a challenge out of every exercise. Grit your teeth and jam the poundages way, way up. You can't expect a build like Grimek if you're handling weights your grandmother could lift.

Give it all you've got. You'll get big and be ready for the next advance in this series.