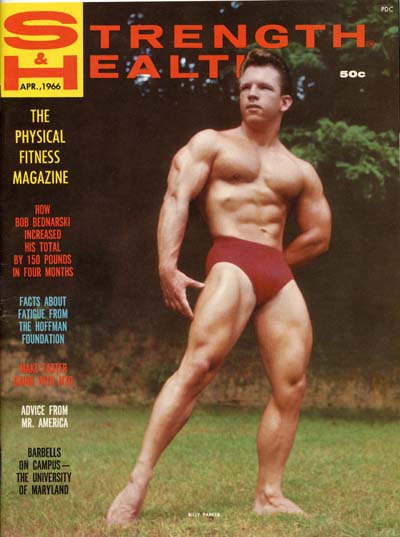 You're ready now for another advance in your bulk and power routines. This new program will be aimed at developing great strength as a foundation for further bulk development.

There's a tendency among uninformed bodybuilders to minimize the strength factor. I remember a fellow I used to train with years ago. He was a tall good-looking kid with a slim, willowy build. He trained on light weights. He had a top Press of 140 pounds and couldn't have cared less.

"Harry," I explained to him. "You oughta do some power training and bulk up."

"What for?" he asked. "The girls think I'm terrific already."

"Girls?" I shouted. "You got nothing on your mind but girls?" I tapped him on the chest. "Get this! Suppose you're walking home with a girl tonight. And suppose some big lug steps out of an alley and drags her away. What do you do then?"

"Easy," he said. "I slip down to the beach tomorrow and get another one."

There may be a few bodybuilders who developed a nice looking build on light weights and never acquired much strength, but all the really greats emphasized power in their training. If you want a herculean body, don't overlook strength.

Steve Stanko was a Mr. America and the first Mr. Universe. He was also the first man to officially total 1000 pounds on the Olympic lifts.

John Grimek is the most famous bodybuilder of all them all. He went to Europe as a lifter on the Olympic team.

Reg Park is certainly one of the best developed men of all time. He won both the amateur and professional Mr. Universe awards among other things. He squats with over 600, bench presses over 500, and can do a press behind the neck with over 300.

Bill Pearl has won every major physique title possible. He squats with 600 pounds and bench presses around 500.

If you want a development like these men, then emphasize strength in your programs. Spend some time at power training.

If you've been following this series from the start, the time for some power training is right now.

As a group, weightlifters are the strongest athletes in the world. No one can match the sheer power of a top lifter. This program, then, will borrow from exercises used by weightlifters in their training.

Remember though, you're not becoming an Olympic lifter. This is a bodybuilding series. You're simply developing great strength as an aid to further muscular development.

You'll be using the split system of training. Work out four days a week; preferably Monday, Tuesday, Thursday, and Friday. This gives you Wednesday, Saturday, and Sunday to rest up.

Split training is a tough grind. Don't add any exercises to the program and don't train for more than four days a week. Keep each session relatively short, but very, very heavy.

Don't forget -- you've got to really put out out to succeed.

On Mondays and Thursdays do the following:

Warm up by doing 6 or 8 reps with a very light weight. Increase the weight and do 5 reps. Increase it again and do 5 more reps. Now jump to your best exercising poundage and do 5 sets of 3 reps with the same weight. You'll probably find you can't make the full 5 sets of 3 at first. Stay with it even if you're only getting 1 or 2 reps on the final sets. As soon as you can make the 5 full sets of 3 reps, increase the weight and start over again. Do the presses in Olympic style -- that is, with some backbend. Find detailed information and study the technique of Olympic pressing. Use every bit of information you can get and concentrate on developing a respectable Press. You'll have to eventually work up to at least bodyweight for your sets of three. Pressing is still the best all-around shoulder exercise. You won't find deltoids much bigger than Jim Bradford's.

Warm up with 6 or 8 reps with a light weight for a couple of sets, then jump to your best exercising poundage. Do 5 sets of 3 with your top weight. Use reasonable style when you're curling. Don't fall into the habit of excessive cheating. There's no point in making a poor back exercise out of what should be a good arm exercise.

One of the best curlers I know is Maurice Jones of Vancouver, B.C. Maurice has arms around nineteen inches and curls enough weight to sink a small boat. We were watching him curling one day and I spoke to the guy beside me.

"He has," he said. "His arms bend easier than most people's."

Again, this is the key exercise. You've got to get your squats up heavy if you're going to make it. Use auto-suggestion to stimulate your mental drive and push the poundage. Try to increase it every workout.

Start out with a light set of 5 reps. Add weight and do 5 more reps. Add more weight and do another 5. Now jump the poundage and start doing sets of 3 reps. Add 10 pounds to the bar every set and keep doing 3 reps. Work up until you can't make 3 reps. You should get in 8 to 10 sets altogether.

Do 8 or 10 pullovers with a very light weight after each set.

Keep your head up and your back as flat as possible when you're squatting. Don't go all the way down. Squat till the top of your thighs are roughly parallel to the floor and bounce back up. Take three huge breaths between each repetition.

A burning desire is more important in squatting than in any other exercise. Whip yourself into a positive frenzy. Force the weight. Get a couple of guys to spot for you if you can and push it to the absolute limit.

Doug Hepburn spent a lot of time on low rep squats. So did Paul Anderson. They settled any remaining doubts on its value as a bulk and power exercise.

You can finish off the workout with 1 set of 25 leg raises.

On Tuesdays and Fridays do the following:

Use a normal pressing width grip and don't cheat too much. Use a little arch on the last couple of sets if you have to, but don't make a belly bounce out of it.

In one of his instructional articles, John Grimek told about a man who just missed an attempt on the bench press.

Reg Park is an avid bench presser. He usually gives a demonstration of his power just before his posing display.

I saw Park bench press round 500 in his street clothes. He was wearing a big blue V-neck sweater and looked almost beyond belief. He absolutely oozed power. Work hard on your power training and you might end up something like Park.

The next two exercises are actually Olympic lifts. Don't be frightened by that. They build power rapidly.

Most of you probably haven't done much work on this. You're in for a pleasant surprise. It's a terrific exercise for developing explosive power. Warm up carefully with a very light weight. Add weight and do another warmup set. Now go to your top weight for 5 sets of 3 reps in dead hang style.

A top lifter of a few years ago used to refer to three dead hang snatches as two quiet ones and a loud one.

Try and develop as much polish as you can in this exercise. There's no reason why you can't learn to do a passable snatch with a heavy weight.

Do these in the same style as the Snatch. 3 warmup sets with increasingly heavier weights and 5 sets of 3 with your best weight in dead hang style. Don't move your feet. Just dip a little to catch the bar on your chest. You should be able to work up quite heavy on this one. A lot of top bodybuilders are good on the Olympic lifts. Sergio Oliva is an example.

Start light on these and do 2 reps. Add 20 or 30 pounds and do 2 more reps. Progress in jumps of 20 to 30 pounds to your limit, doing 2 reps each set. Remember to do them in dead hang style.

Use a reverse grip. Keep your head up and your back flat. Don't be afraid of the weight. You should be able to work up to over double bodyweight for 2 reps.

The deadlift is hard, but supreme for developing raw power. Work at it.

Finish off the workout with 1 set of 25 situps.

Stay on this program for two months. Make up your mind right now that you're going to be using heavy weights at the end of it. Two months from now you'll be heavier and a lot stronger. You'll have the necessary power to go into the next advance in the series.