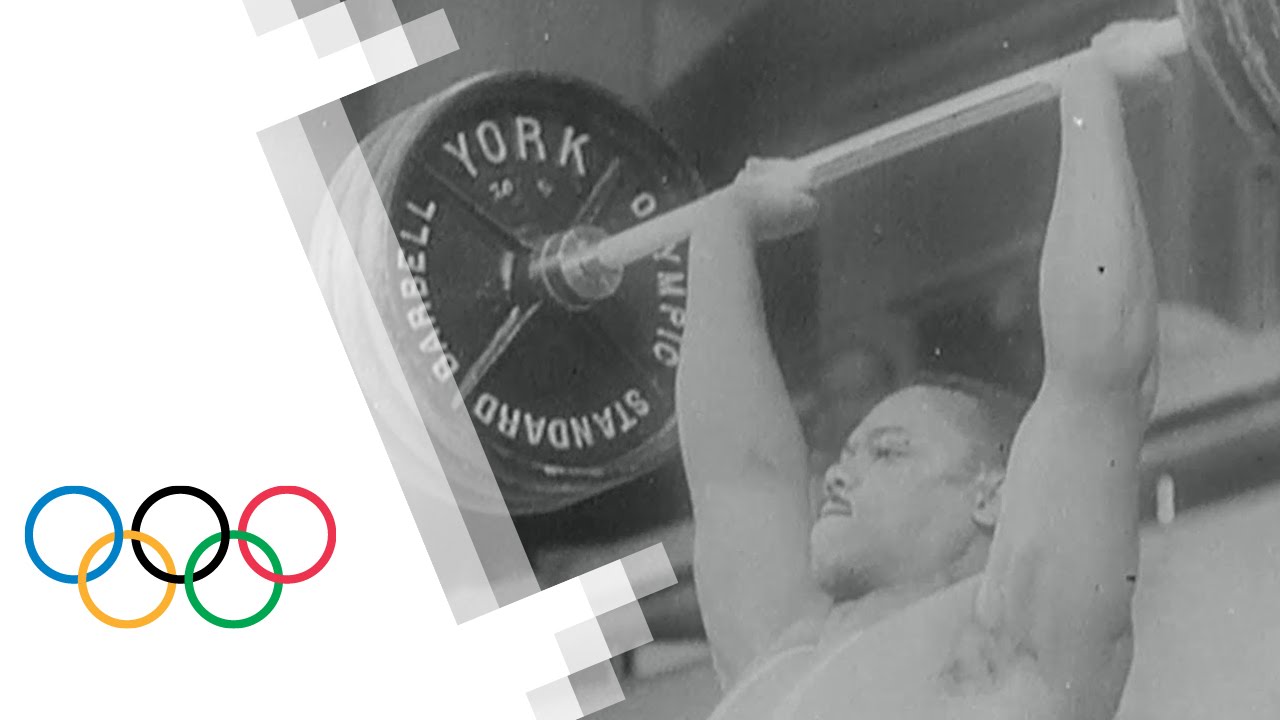 How many lifters have said, after failing on a Press, that they know they would not succeed because "it did not feel right" at the shoulders. It didn't "feel right" because they neglected  to Clean the bar properly and this is indeed a common error. 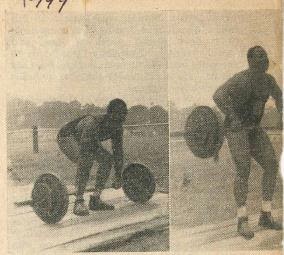 It shows the fundamentals which, to a certain extent, are applicable to all three lifts. His feet are comfortably apart and under the bar, with the shins in contact with the bar. The knees are kept well bent, but not too much. The back is flat with the head up and the eyes directed forward. This disposition of the thighs and back puts the buttocks in the required low position. the arms are straight and the shoulders slightly forward over the bar. The forward position of the shoulders is essential for those with long backs in relation to arm length. This type, with arms vertical to the bar would have the buttocks too far back and to low. When the buttocks are too low, the legs are working at a mechanical disadvantage.

On the other hand, carrying the buttocks too high and shoulders too far back would result in a rounded back position. The strain of the first pull would then be thrown on the lower back muscles and the bar would swing  forward from the floor instead of vertically upward.

Make sure that your starting position feels comfortable and that you can pull the weight from the floor with the effort evenly distributed between the legs, back and shoulders. Do not make the mistake of pulling the bar to the shoulders purely by means of the back and arms. A high pull like this, which arrives at the shoulders while the legs are kept straight, normally lands with a jar, disturbing both the physical and mental balance. Also, the deltoid and upper trapezius muscles are brought too vigorously into use, which tires them and makes them less efficient for the actual pressing movement. To avoid this, the legs should be bent slightly as the bar arrives at the shoulders, to act as a shock absorber.

Diagram (A) shows how NOT to make the Clean. In the first diagram the buttocks are too high and the shoulders too far forward, causing the bar to swing forward instead of vertically upward as shown in the second diagram.


A number of lifters who are capable of a really heavy Press, e.g., Mel Barnett, Grigori Novak and John Davis use a "step back Clean." As the bar comes to the shoulders, they take a short step backward and then immediately step forward with the same foot. This technique is clearly illustrated in the accompanying photographs of John Davis.

The "step back" Clean shown here conserves energy, a important point when cleaning a heavy Press poundage. Not the firm upright position in the middle photo . An important point of technique is the way Davis has drawn his head back slightly leaving a clear path for the vertical drive. In the photo on your left, he is just past the sticking point and maintaining god form. I have personally seen John Davis Press 336 with reasonably good style.


A full Split Clean uses up too much energy and disturbs the balance and may prevent the bar from landing smoothly in the desired pressing position. The slight assistance of the legs either by bending them or by the "step back Clean" helps to conserve energy for the real effort of the Press itself. For conservation of energy again it is imperative that the Clean and subsequent adjustments must be concluded as quickly as possible. The longer you take to Clean the bar and settle yourself before pressing, the more difficult it makes the Press itself.


The Grip for the Press 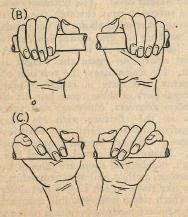 Diagram (B): Full pronation, with bar straight across hands.
Diagram (C): Semi-pronation, withe the bar diagonally across the hands.


The grip can be dealt with from two points of view:

a) the way in which the fingers grip the bar,
b) the distance between the hands.

The two main methods of gripping are obviously either the "thumbless" or the "thumbs around" style. One can ignore the odd few who use the hook grip for the Clean part of the Press.

In the thumbless grip, the thumb lies under the bar, parallel to the fingers. This permits the bar to rest further forward on the heel of the hand. There are some lifters with limited pronation of the hand, In direct opposition to this theory of direct drive from the heel of the hand, there are some lifters who like to rest the bar well back on the hand. They claim that they can impart a little extra drive by raising the palm of the hand during the Press. This is similar to the flick of the hand in the final stage of putting the shot.

Returning to the lifters with limited pronation, the thumbless grip is better for them for another reason. If they bring the thumb forward to grip in the thumbs around style, they contract the pronators of the forearm. One of the muscles, the "pronator teres,"

- passes over the front of the elbow joint from the inner side of the humerus to the outer side of the radius and acts as an accessory flexor of the elbow. In other words, this muscle is helping to bend the arm, while your main intention is to extend the arm in the Press. Thus, the thumbs around grip tends to hinder this type of lifter. Remember, it only applies to those with very limited pronation, which will be considered again when we come to consider width of grip.

The thumbless grip can also provide a wider base under the bar, which some lifters find more satisfying. Those with small hands will probably find this an advantage, just as John Davis does. John Stuart of Canada goes even further - 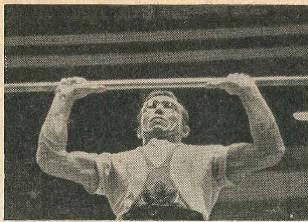 - he extends his thumbs along the under-surface of the bar in line with the heel of his hands. Another point in favor of this grip is that it provides freer articulation for those who adopt the practice of 'wriggling' the elbows while trying to work the bar past the sticking point.

One disadvantage of the thumbless grip is that it makes a very heavy Clean rather insecure. In this case, the obvious thing to do is to adopt the technique used by Mel Barnett or John Davis. 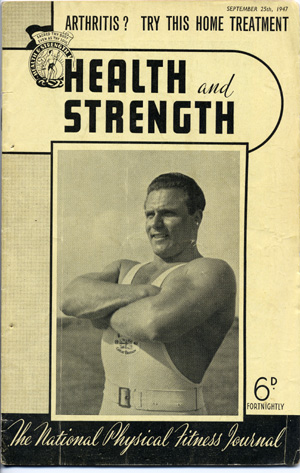 They grip the bar with the thumbs around at the start of the Clean and then slide the thumbs out as the bar turns over on to the chest. (See photos of John Davis above).

As you will have gathered from the preceding remarks, the thumbs around style is normally used by those who can easily pronate the hands. Also, with this grip, the bar rests straight across the palms in a very secure position. There is considerable psychological satisfaction in gripping the bar hard when making a full-out effort. Lifters find that they can "fight" the weight up better with a really fierce, determined thumbs around grip.

A number of lifters do not like changing their grip midway in a lift, and so continue with the thumbs around grip originally taken to ensure a safe Clean. Another factor that can influence the choice of grip is the width of hand-spacing. With a narrow spacing between the hands, it is usually easier to use the thumbless grip, particularly when a close elbow position or vertical forearms are required at the start of the Press proper. When the hands are wide apart, either grip can be used, but most lifters seem to prefer the thumbs around grip with the wide spacing, notably Grigori Novak.

Please do not imagine that we have any particular preference, because there are so many variable factors. Also, a study of the world's best Pressers shows an almost equal division between the two styles of grip.