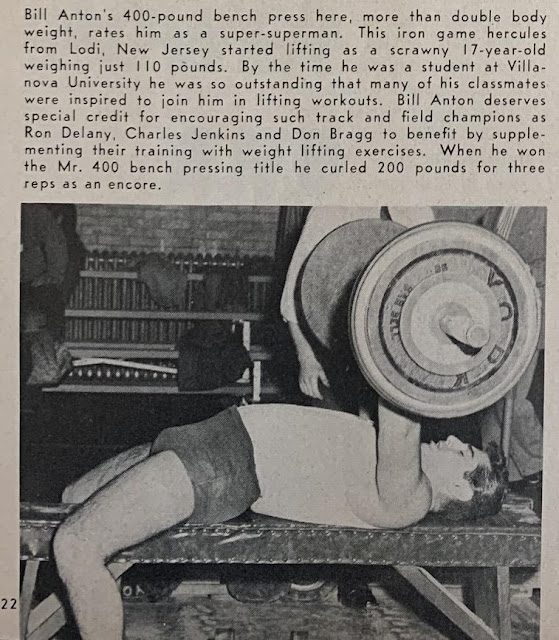 There are, said Shakespeare, "Books in the running brooks, tongues in the trees and summons."

His was a most colorful, yet nonetheless accurate way of expressing that every single thing on earth has something of value hidden in it; that knowledge is everywhere for us to discover. It may sometimes be concealed, sometimes disguised, but it can readily be uncovered if only we are willing to search for it.

The Bard of Avon might have gone further to say that the man is wise who keeps an open mind, who cultivates his thirst for knowledge and who gives evidence of his willingness to learn all he can from whomever he can. Let's develop this theme further and use the bench press as our medium.

There are some weight lifters and bodybuilders who have learned through experience that this exercise is one of the greatest ever known in the world of weights. They have discovered through their experiments on themselves and others that the bench press cannot be topped for building the highest possible degree of upper body bulk, muscularity and unbelievable power. They have found that the bench press is responsible in part for military press records, and also develops overhead lifting power with great lockout strength, which explains why the greatest Olympic lifters it in their routines.

It is a fact that the greatest bodybuilding stars in the world, each and every one of them, Mr. Universe, Mr. World, Mr. America, etc., have used the bench press.. These great champions stand by the movement and by the many variations of it that can be performed on a flat bench, incline bench, or on the floor, and see it as one of the finest upper body exercises that they have ever used in their training routines. Some of them even go so far as to say no training schedule is complete without the bench press.

Numbered among the great are John Davis, Norbert Schemansky, Tommy Kono, Paul Anderson, every outstanding Russian lifter, and the man who in my opinion did more than anyone else to popularize the movement as an Olympic lifting aid, the first man in the world to bench press 400 pounds,the Daddy of all the Bench Pressers, Doug Hepburn, the Vancouver Powerhouse.

When the bench press is used correctly, nothing can beat it for deepening and thickening the chest, bulking up the arms and broadening the shoulders, for this exercise works the largest mass of muscle in the body. The main muscles used in the bench press are the pectoral major, pectoral minor, anterior deltoid, triceps, serratus and the rib box.

Marvin Eder is a great example of what the bench press can do for a man determined to build up the greatest degree of all around pressing strength. At a bodyweight of 196 he overhead pressed 350 pounds and bench pressed 480.


As I have found through training it, and you will too by being my pupil -- use the bench press with enthusiasm and prove to yourself that there is no exercise in the world that can match it for upper body results.

I proved to myself through intensive training and breaking one record after another, no matter where I traveled that if I, who once at a bodyweight of 130 pounds possessed 10 inch arms, 36 inch chest, and could bench press only 90 pounds . . . went to a bodyweight of 195 with 17 inch arms, 49 inch normal chest and can bench press over 400 pounds . . . I can guarantee results for you after you have religiously followed my training program.

The bench press is without a doubt the greatest exercise of them all, the secret to power and is this is evidenced in the world's strongest men. It is definitely a measure of strength. The present day record holder is that great Georgia giant, Paul Anderson. Paul, at a bodyweight of 405, benched 600 pounds, a titanic feat of pressing power.

In my training program I will prove to you where, after you have graduated, you will be pressing 400 pounds at a bodyweight of around 200. If you first begin my program and fall into the class of a heavy person, and follow my program religiously, it will reduce you while you can still eat as much as you want. If, on the other hand, you are underweight, this course will make you gain massive muscularity. It was only a few years ago that the 400 pound bench press mark was a lift just to be dreamed of, but today through scientific training several great strongmen have achieved this fantastic, unbelievable lift. I, being the 13th man in the world to accomplish this feat, have been reigned with the title of "Mr. 400."

While others have mastered this lift, I, through careful study and training, have not only mastered the lift but mastered the training methods involved and am in a position to offer it to you. The most important thing in training is to never miss a workout. Missing a workout is like getting a 30-second late start in a quarter mile race.

In bench pressing there are several different might take. Different sized men use different grips. A collar-to-collar grip is used by our superheavyweights. A lighter person is inclined to use a narrower grip, due to the fact that a person has more pressing power in this position.

In both instances, the arms are not pressing straight forward, but are fighting one another. This causes misshaped pectorals and gives trouble to your wrists, in turn causing you to dislike the bench press.

I have found that for the greatest power with the least amount of effort, use a grip where your forearms are perpendicular to the bar when you're about to press. By doing this your wrists use all their capacity of strength and your shoulders and arms are pressing straight overhead.

When bench pressing, be sure to use a sturdy bench and make sure you have your back in balance so that when you are handed the weight you do not wobble. When you grip the bar, grip with your thumb around the bar and bring the bar down at a moderate speed. While doing so take a deep breath and hold it. After the bar has touched your chest, continue to hold your breath and ram the weight to arms' length. The split second the bar reaches the "sticking point" release your breath and you will find the weight reaching arms' length easier. In lifting as in anything else, "know how" means a great deal.

I make no restrictions on food and rest except that your daily diet should include two quarts of milk and two bananas daily. Never train after eating until you have digested for two hours. Be sure to warm up before lifting and make the bench press the first exercise of your workout.

The training program lasts for a period of three years and each year is broken up into four periods with three months in each period. You must work out three times a week without fail.

Take a weight you can handle for 12 repetitions and perform 10 sets. Each week add 5 pounds to your previous weight. Don't start too heavy, but if you find that after a while you cannot continue to add weight, stay at the present weight you are using until you can the 12 reps for the full 10 sets.

Take a weight you can handle for 8 reps and perform 10 sets. Same theory applies if you get stale. Stay at that weight until you master it.

Take a weight you can handle for 5 reps and perform 12 sets.

Take a weight you can handle for 3 reps and perform 15 sets. At this point of your training you should be benching in the neighborhood of 265 pounds, no matter what your bodyweight. Of course, a heavier person will bench press proportionately more.

Take a weight you can handle for 8 reps and perform 12 sets. Be sure to fight the last rep of the last sets out.

Take a weight you can handle for 6 reps and perform 12 sets.

Take a weight you can handle for 5 reps and perform 13 sets.

Take a weight you can handle for 3 reps and perform 15 sets. At this point if you must arch your back, you are permitted to. At this point of your training you should be bench pressing in the neighborhood of 350 pounds.


In the third year, test your one rep maximum record once or twice a month.

Take a weight you can handle for 5 reps and perform 12 sets. Remember, don't miss a workout and squeeze out that last rep.

Take a weight you can handle for 3 reps and perform 15 sets.

Take a weight you can handle for 4 reps and perform 15 sets for the first month and for the remaining two months perform 2 reps for 10 sets.

In this period try your max record every week.


After this three year period of specializing on the bench press you should be benching 400 pounds.