The content on Strength & Science is about one thing and one thing only: the evidence-based approach to fitness. No fads, no ego, and no speculation. If something appears on this site, it's because there's good evidence to back it up - either directly from the scientific literature, or based on a sound line of reasoning. Don't take my word for anything.
http://gregnuckols.com/articles/archive/

Before passing on to training schedules for the Press, we think it would be as well to give a brief summary summary of the more important points of the technique of the lift. First of all, you must have the right mental attitude. Cultivate a positive and purposeful approach. Learn a simple routine of movements for the approach, breathing, clean, pause, etc., and practice them faithfully until they become automatic. These preliminaries must be as brief as possible.

Breathing control is an important part of the routine -- breathe in before the clean and again just before the Press proper or simultaneously with the initial drive. Avoid holding the breath for a long period. Start the clean with knees fairly well bent, buttocks low, back flat, head up, shoulders slightly forward of the bar, arms straight. Make full use of the legs during the clean but waste no time in assuming your starting position. Experiment with you grip and decide for yourself whether "thumbless" or "thumbs around" suits you best. Neither has any great advantage over the other so choose the one that feels most comfortable to you.

Most good pressers use a grip wider than shoulder width, some a good deal wider and this wide grip has many mechanical advantages. [See Al Murray's other articles on this blog for a more in depth analysis on  this and other facets of the clean and press.]. With a very wide grip, the elbows should be inclined at the start. The feet should preferably be a short distance apart.

Balance is all-important and the line of balance starting at the instep should pass vertically through the hips, which have to be eased forward for this purpose. The barbell should also be maintained in this vertical line because it is all important that "the line of action should coincide with the line of balance."

To obtain this vertical pressing line, start with the bar clear of the chin on a high, arched chest, the body slightly curved forward at the hips, the shoulders vertically above the heels. Maintain this slight forward curve of the hips right through the Press.

The initial drive should be as vigorous as possible, in a direct vertical line upwards. Keep the bar moving vertically without allowing the shoulders to fall back. It helps tot raise the shoulders at the start, followed by quickly dropping them to increase the angle at the elbows which should be urged inwards toward the head as strongly as possible. Concentrate fiercely on fighting the bar to arms' length.

First of all, we shall consider the beginner, that is the lifter who has just completed his preliminary weight-training course before proceeding to a more Olympic-lift-based form of training. It goes without saying that we favor a preliminary weight-training of strengthening course for all beginners, the duration varying with their natural ability and physical condition, but in any case not to be less than three months. During this preliminary training, the beginner should perform his Presses in strict "military" style, i.e., with the body kept rigidly erect and the bar moving round the face. The object of this is to ensure that the upper arms move through their full range to a vertical finishing position. Full range movements are vital for full development of a beginner. In the technique we advocate for competition pressing, owing to the arching of the chest and the thrust forward of the hips, the arms do not finish in a vertical position but slightly forward of the ears, thus losing 10-15 degrees of full range movement. To compensate for this, it is as well for the beginner to include some Presses Behind Neck (military style) during his training, or alternatively some variations of dumbbell pressing. We also share the views of many authorities such as W.A. Pullum, George Walsh and Bob Hoffman that in his early days a lifter should practice many exercises to provide the shoulder with all-round strength and power for pressing. We refer you to W.A. Pullum's fine article on "Assistance Exercises for the Press" which appeared in the May, 1949 issue of this magazine. 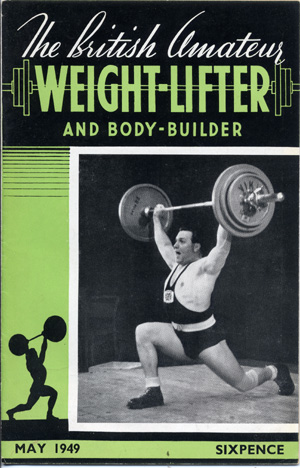 Normally during his preliminary training period, the beginner will be doing his Presses in 10 repetitions at a time. When he is ready to pass on to Olympic specialization or a more Olympic-style lifting routine, he should alter his repetitions in groups of 5 for a few weeks, before adopting the more usual groups of 3, 2 or 1 repetitions. This is in order to accustom him gradually to handling heavier poundages and to the higher energy output required in working up to near-limit poundages. [Many beginners take some time and practice before acquiring a realization of just how strong they actually are, and how hard they can push while still maintaining form.] He should find a weight that he can press for 5 or 6 sets of 5 repetitions. The last 5 should need considerable effort, but never at the expense of correct position. In every one of his 25 or 30 Presses he should concentrate intensively on maintaining correct positions, and it is at this stage that he needs, if possible, the services of a good instructor to establish a god style right from the beginning. With weight-lifting, as in other sports, it is more than half the battle to get into correct habits at the start. it is amazing how difficult it is to "unlearn" faulty habits and bad technique. Therefore, when the beginner reaches this stage, he should drop his "military" style and start developing the "Olympic" style as described in this series of articles. [this refers to the earlier version, and not the standing bench press variety].

After four or five weeks of pressing 5 sets of 5 reps, the beginner should change to 8 sets of 3 reps with after the warmup, a fixed weight. The exact weight must be carefully selected, so that the last 3 reps need real effort, but again, never at the expense of good style. After another four or five weeks of this he should be ready for one of the more usual Press schedules. The BAWLA "Standard" schedule which BAWLA instructors are advised to use is as follows, based on a supposed maximum of 150 lbs.

A similar but slightly modified schedule will suit those who find the above program progresses too rapidly:

Here is another schedule which will suit those who cannot make too many repetitions with top poundages. It is also guaranteed to develop stamina in the pressing muscles and early stamina training is almost as important as strength and technique training. This schedule was a favorite of Josef Manger, former German holder of the world's Press record. Again we presume a top limit of 150 pounds.

Another variation of this was used by the Scottish "Boy Wonder" and record holder, Phil Caira 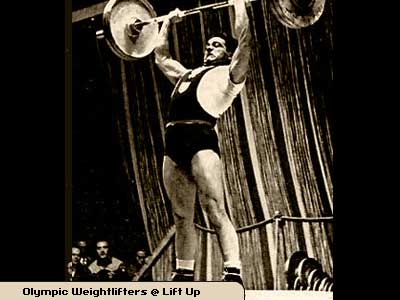 Al Murray has also found it effective with many other lifters.

Schedules for the Average Advanced Lifter

Later on, when a lifter has more experience, the need for stamina training is not so important, providing e has laid his foundations wisely during the early stages of his training. Now he must concentrate on developing power, so the number of repetitions should be cut down in order to be able to handle higher poundages. Again we must emphasize that the schedules which follow are for more advanced lifters who are near their ultimate maximum. Such schedules are, of course, not suitable for beginners, who need many repetitions to develop both stamina and style. These shorter schedules are also suitable for combining with Snatch and Jerk schedules during single workout or training sessions. Here we presume a 200 lb limit.

The "Miniature Disc System" is rather an elaborate training method, based on the age-old story of Milo and the bullshit. That should read bull. However elaborate, this miniature disc system is mentioned for those who may be interested.

20 to 40 little discs should be made to fit over the end of your bar, and their combined weight should total just 5 pounds. Choose a fixed weight with which you can just manage 15 to 20 single repetitions. The next session, add one miniature disc at each end of the bar and do your 20 single reps again. The next day add another disc to each end, and continue until you have added all the discs. You then remove all the miniature discs and start again with  5 lbs. (2 x 2.5 lb plates) added to the bar, again adding your miniature discs day by day.

Schedules of the Champions

Phil Caira has a present top limit of 250 lbs, and here is one of his favorite schedules:

British record holder, uses a schedule similar to many of the lifters training at the Empire Games. Other champion lifters start somewhat lower than this, progress upwards in groups of 3 reps, go on to groups of 2 reps as the bar gets heavier and then finish off with 3 or 4 single reps with either a 5 or 10 lb increase between these last 3 or 4. This is the customary procedure with the Egyptians and it suits the lifter who takes a long time to warm up.

When George Espeut was pressing around 215 to 220, he nearly always used sets of 5, 4, 3, 2, 1, starting 40 to 45 lbs below his maximum and finishing 5 to 10 lbs below his maximum, with increases of 10 lbs for each set. If the last Press was not too "hard" he would sometimes try another one, either with the same weight, or even with a 5-lb increase. We do not advocate this type of schedule for use over a long period, because it is a "forcing" one and can quickly lead to staleness.

At one time, the great Ronald Walker swore by 8 sets of 2 reps with a weight which forced him to really fight up the last 2 reps. He did his 8 sets of 2 three times every day.

On the other hand, Alf Knight, one of our most stylish pressers, does a considerable number of repetitions daily with a fairly light weight. You might say he "greases the groove" if this wasn't 1950. In fact he keeps a set of weights in the butcher shop where he works and in between serving customers nips out to the back to do a few reps.

John Davis, the world's record holder, has used this schedule:

Johnny Terpak, the popular captain of the USA team and himself a Press record holder, assured Al Murray that off-season the York team usually went on sets of 5, doing about 6 sets of 5 reps.

Lifters who find sets of 5 overtaxing could try 10 or 12 sets of 3 reps with a fixed weight.

Useful variety also can be found in dumbbell presses.