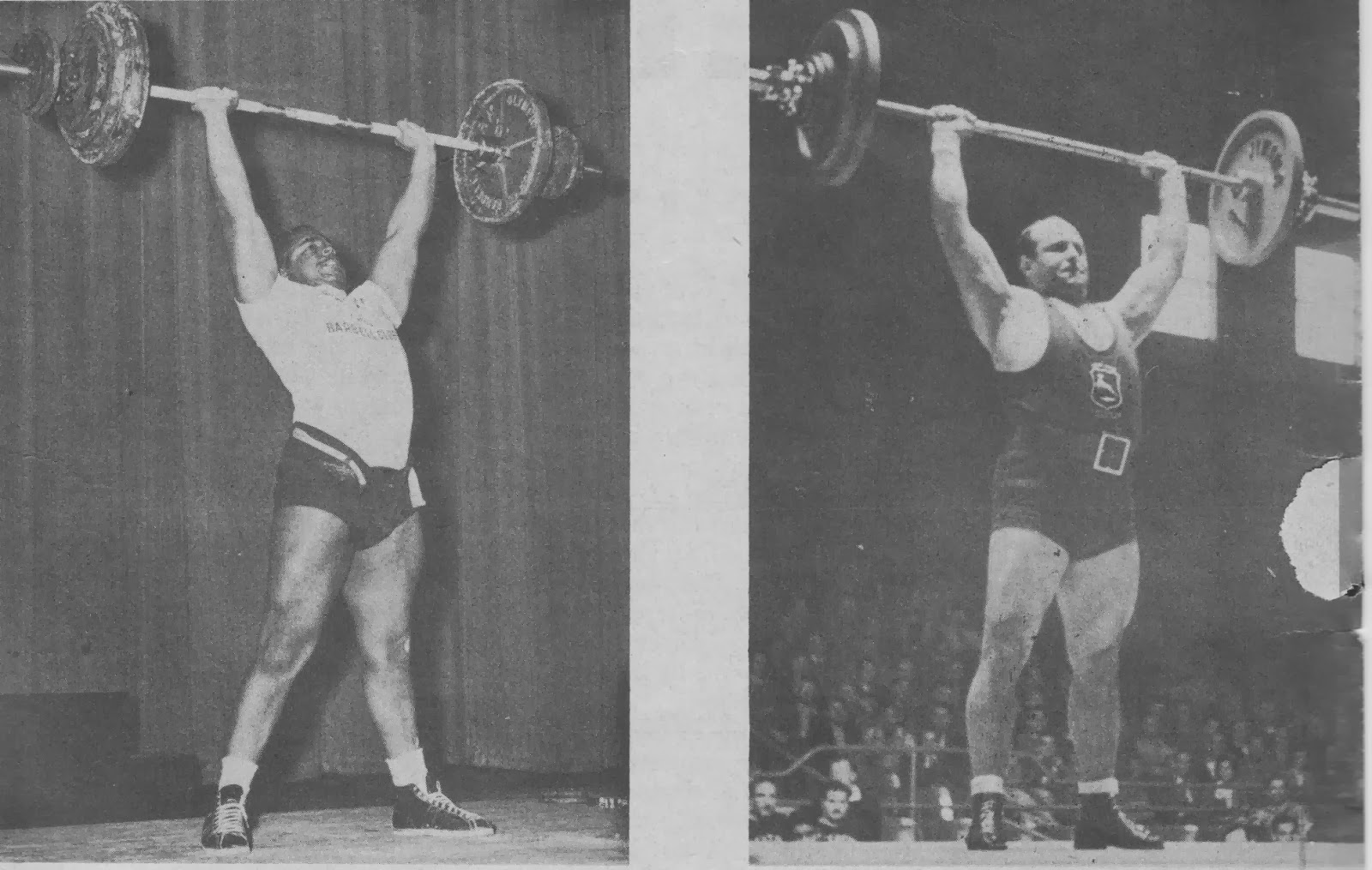 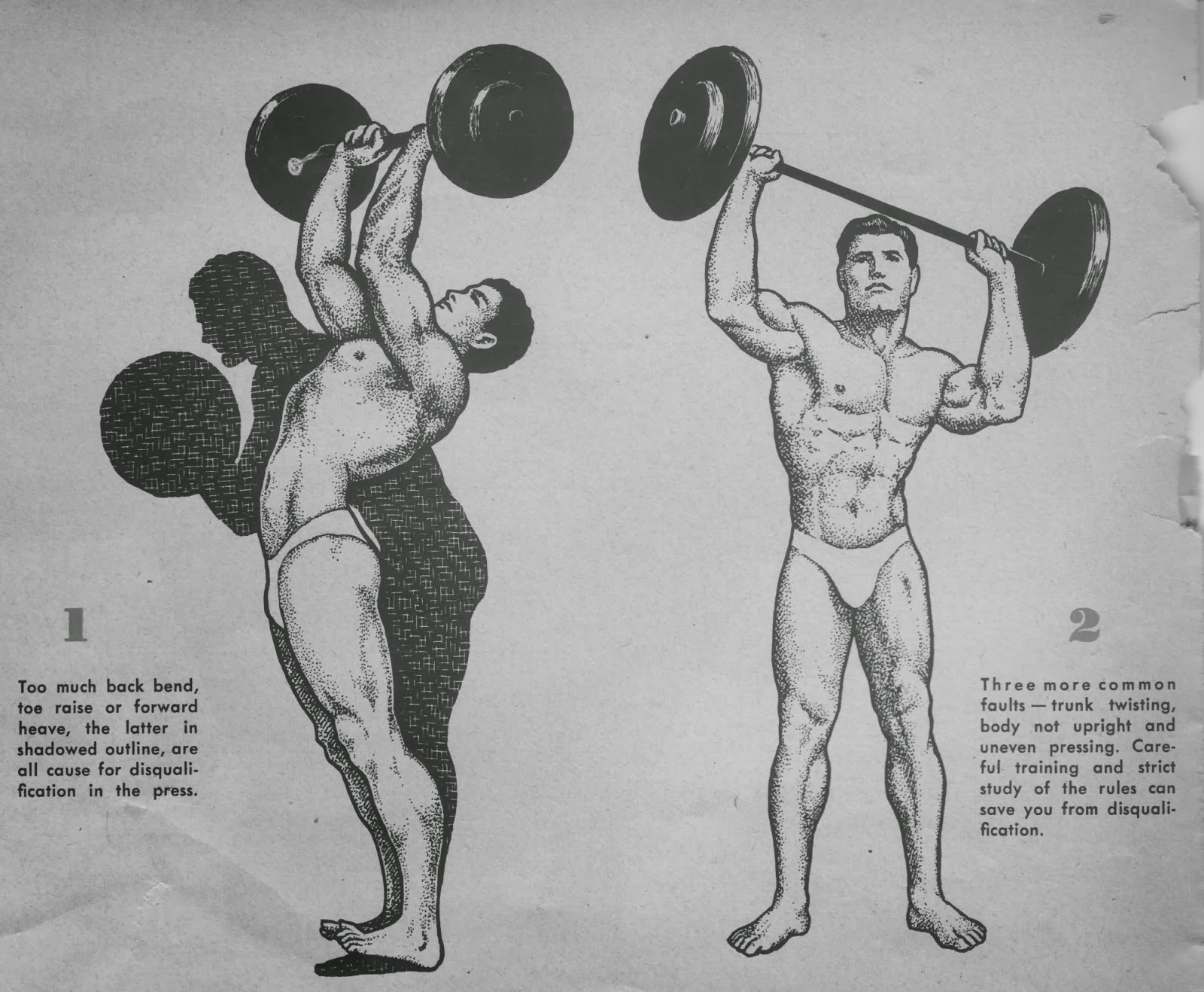 There are two jobs I wouldn't wish on my worst enemy - writing about weightlifting and kindred subjects, and acting as a referee at a lifting contest and of the two, I think the judge's job is the hardest. People forget all too soon the nice things you write about them even tho' you pen them a thousand times. They swiftly prepare to tear you limb from limb the very first occasion you offer the smallest bit of adverse criticism - and it matters not how much you try to soften the blow. Lifters say nothing if they happen to 'get away' with a little lifting 'skullduggery' but let a referee and judges stick to the rules and the majority of athletes get the idea that officials are their mortal enemies. I'm feeling a little gloomy this morning anyway, so just take my remarks with a big pinch of salt.

I do want to impress on all you young lifters that the judges are there not merely to say if your lift is good or bad but to HELP you. Theirs is a darn hard job, believe me, and their decisions are in 99.9% of cases good decisions and honestly rendered. An official very often is guilty of a HUMAN error of judgement but never, if he knows lifting rules, in error where those rules are concerned. The trouble arises when the rules in certain lifts are applied. I have in front of me four national and international sets of rulings - The American Rules - The British Rules - The Australian Rules - and the Olympic Rules, and each of them differs in some way from the other. While these differences hardly concern you now, yet if you ever reach International Standard - and I sincerely wish this for you - the ARE going to make quite a bit of difference.

You have been working with the exercises that will help you when you enter Olympic Lifting, and if you have made correct use of the movements, will have a good groundwork on which to lay your future progress in lifting. Now - the very first thing for you to do BEFORE enter a competition - before you even start to train on the actual Olympic lifts, is to purchase the AAU Official Weightlifting Rule Handbook. During the entire period you are using the Olympic preparing exercises described and dealt with in another article -

- study those rules, get into your head every sentence, phrase, word! Memorize every rule. Familiarize yourself with the platform procedure. Know exactly what you should do and what can get you disqualified. Attend every weightlifting meet and physical excellence contest. Go up to the judges AFTER the show and ask them questions. Any point or decision about which you are not clear, mention it to the officials and they will help you all they can. Don't wait until the time comes for you to enter a lifting competition, or until you have been lifting in contests for some time. Do your querying BEFORE. Perhaps you think I place too much stress on the importance of the rules. Let me assure you that they ARE just that - IMPORTANT. They govern our lifting conduct and they tell us whether a man is worthy of a world record and fame or if he has just made another - attempt. There are too many lifters competing today who have little of no idea of Weightlifting Rulings. There are too many lifters who have their own interpretation of the rules or accept blindly what what they are told by 'authorities' without question. Your only authority should be your rule book. It doesn't matter one bit if someone insists that it is no longer cause for disqualification if the bar touches your knee on the way up in the snatch or clean and jerk. There is no authority for the statement that a lay-back or back-bend is permitted in the Press. In any case of doubt, always accept the Rule Book as the final authority. If you STILL feel doubtful about a lift ruling, then I suggest you consult the National Weightlifting Chairman, whose address I will be happy to supply. He will be able to tell you of any rule amendments. In United States lifting, the Press is called, erroneously, the TWO HANDS MILITARY PRESS. It is anything but Military. The exact title of the lift SHOULD be - The TWO HANDS CLEAN AND PRESS. There are definite rules governing the 'military version' and there is NO SUCH LIFT as an OLYMPIC PRESS. I am not trying to air any knowledge or cause any arguments. I am just stating the facts. In the old days - way before Sandow - a strict version of the press was known to Continental European lifters and was reputed to have been introduced to England by a Professor Szaly.

When the Saxons came to England they also showed that they knew this strict press style. In fact, the 'back-bending' type of press was known as the Two Hands Bent Press because of this looser manner of performance. When Eugene Sandow opened his extensive chin of Physical Culture studios throughout the United Kingdom, his instructors were Physical Training Men from the British Army School at Aldershot.

The iron British Army discipline they had undergone influenced their teaching methods and one of the required strength tests was to press a weight. In doing so they had to keep the 'MILITARY' position of 'ATTENTION' - hence the term Two Hands MILITARY PRESS. When this lift was incorporated into British Amateur Competition weightlifting, not only were the above positions retained, but the lifter had to keep the hand spacing not more and not less than shoulder width and during the lift it was required to raise the barbell at an even speed ALL THE WAY - usually the lifter kept time to the referee's rising hand of finger.

The Press used in modern competition does, under the rules retain ALL the features of the Two Hands military press with the exception of the leg and hand spacing. Yet these rules are rarely kept to. For your guidance, here they are. I will not attempt to question the rights or wrongs therein. I will not attempt to tell you how they are to be interpreted. I will simply quote and tell you what you can be disqualified for.

But I Do advise you to carefully watch the standard of officiating at any meet you are in. Observe what the other lifters are allowed and what they are disqualified for. But above everything else DO learn to PRESS IN ABSOLUTELY STRICT STYLE. Then, if the judging is strict, you will be protected - if it is loose, then that is all to your advantage. If however you lift in a loose style, full of bad habits and in a manner bearing no relation to the lift as outlined in the rules, you are going to have lots of trouble. Just one official keeping strictly to the rules can cost you a title AND you will be the only one to blame. In lifting, good habits win contests. Bad habits get worse.

FIRST MOVEMENT.
The bar must be laid horizontally in front of the lifter's feet, gripped with both hands and brought with ONE SINGLE DISTINCT MOTION up to the shoulders while either lunging or springing on bent legs. The bar is then rested on the chest or arms closely flexed. The feet must be brought back on the same line not more than 16 inches apart.

SECOND MOVEMENT.
When in this position hold the BAR MOTIONLESS for two seconds STANDING STILL. The time will be indicated by the clap of the judge's hands. The bar is then lifted up vertically until the arms are completely extended WITHOUT ANY JERKING OR SUDDEN STARTING. When the motion is completed, another stop of two seconds is required., the arms and lets stiffened. DURING THE ENTIRE LIFT THE LIFTER'S BODY AS WELL AS HIS HEAD MUST CONSTANTLY REMAIN IN THE VERTICAL POSITION.

IMPORTANT REMARKS.
As a rule the bar must touch the chest before performing the second motion, which must not commence until the Judge gives the signal by clapping his hands. LIFTERS WHO ARE UNABLE TO REST THE BAR ON THEIR CHESTS MUST INFORM THE JUDGES OF THIS FACT BEFORE COMMENCING THE TEST. For this class of competitors the starting position of the press, so far as the uplifting proper is concerned shall be indicated by the meeting point of the collarbone with the sternum.

CAUSE OF DISQUALIFICATION.
Any departure of the body or head from the vertical position, any foot work (heel lift or toe raise, etc.,) any bending of the legs, any uneven raising of the arms during the uplifting, will be cause for disqualifying thte lifter on that attempt.

Let us take the first sentence. It is a common fault with some lifters to clean the bar to a point level with, or above the nipples and THEN shift the bar to across the shoulders for pressing. According to the rules this SHOULD be cause for disqualification. It is distinctly stated that the bar MUST be cleaned to the shoulders in one distinct motion. Wherever the bar lands, it must be pressed from that position. Otherwise it is NOT a CLEAN lift.

When the bar is in the pressing position, the feet MUST be brought back on the same line - that is the feet may NOT be one ahead of the other. As soon as you are in the position indicated above THEN and NOT BEFORE does the referee give the signal for you to commence the press. In other words you must be ready to press and stand still for TWO DISTINCT SECONDS before the referee is entitled, according to the rules, to give you the signal to make your pressing attempt.

When you get the clap you start to press. You must NOT drop the bar down to get a rebound but you MUST press it straight up with no sudden jerk of start. During the actual and entire press you are NOT allowed to set back the shoulders or bend back. In fact, you are not allowed to do this at any time during the press altho some 'authorities' try to tell you that you can get away with these press positions if they are assumed BEFORE the actual press from the shoulders takes place. When the weight is at arms' length, the arms must be kept locked and the lifter must stand still for another two seconds at the end of which period the referee will again clap his hands as the signal to lower the weight.

So just go to a contest - the very next chance you get. Take a copy of the rules with you and see how many lifters keep to the letter of the law and how many officials rule them out when indicated. The plain fact of the matter is that if the judges kept to the rules there would be hardly any lifters making successful presses. I try as much as I can to judge FAIRLY, HONESTLY and with faith that the lifters themselves will know I am doing my best, without fear or favor.

There is but one thing for you to do. The press is the one lift that is the cause of more dissension than any other. You can but keep to the AAU Rule Book and rest assured that your percentage of successful lifts will be higher than the other competitors. In order not to handicap yourself, you MUST take notice of the judging standard and to do this you MUST know the rules. And don't forget to work hard on those preparing exercises.