In weightlifting, as in boxing and wrestling, it is the heavyweights who attract the most spectator interest. This isn't quite fair to men in the smaller classes, who often are better performers - pound for pound - but what really impresses people is absolute performance. And this the heavyweights provide. They lift the heaviest weights!

Often heavyweights are gigantic men whose gross size and crude style detracts from their performances. Fewer and fewer, however, are the men who can win championships on brute strength alone. Such well-build athletes as America's John Davis and Norbert Schemansky established a trend by mastering lifting techniques to an extent that they were almost always able to out-lift more massive competitors.

Only when a true giant such as Paul Anderson comes along - a man who is both huge and quick-moving - are the "smaller" heavyweights at a disadvantage. As a result of this disadvantage, a new crop of heavyweights has arisen, combining size and strength with great athletic ability. The great Schemansky has adapted, packing on about 30 pounds of still well-proportioned mass so that he can continue to lift on equal terms with the giants.

Russia's Vlasov is another big, strongman who is a true athlete with excellent proportions and quick movements. 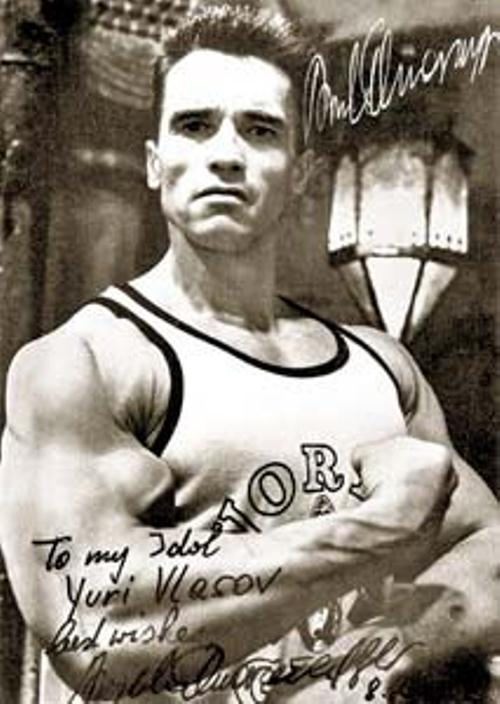 But, life being what it is, even a super-athlete like Vlasov cannot remain at the top of the heap forever. Leonid Zhabotinsky, Olympic champ, appears ready to exceed all of Yuri's world marks.

Zhabotinsky is a true giant, inches taller than Anderson at well over six feet in height, and heavier, while retaining athletic proportions. Vlasov believes his younger teammate will be the man to eventually surpass the incredible 600-kilo total on the three lifts. 600 kilos is 1,321 pounds!

The 26-year-old resident of Zaporozhye, though always large, was typical as a growing boy. He liked soccer football and track and field. He was an outstanding shot putter as a boy, setting a junior record for the Ukraine with a distance of more than 49 feet. Now serving in the Russian army, Zhabotinsky is also in his fifth year as a correspondence student of the Kharkov Teaching Training Institute.

Zhabotinsky was a 'natural' at weightlifting. In 1958, when only 19, he became a master of sport by lifting a total of 974 on the three Olympic lifts! Three years later he accomplished what for most heavyweights is only a dream - a 1100 lb total.

When Zhabotinsky lifted his first 1100 total, Vlasov still had a100-lb lead on his youthful rival. But at the Olympics Zhabotinsky had increased his total to an incredible 1262 lbs and had set a world record of 479.5 lbs in the clean and jerk.

In Tokyo Zhabotinsky greatly impressed me with his lifting, for I had thought that he might be too fun-loving a person to apply himself and make the totals it would take to beat Vlasov. Now, however, Zhabotinsky says he will not give up his heavyweight title without a battle.

We can look forward to another 'battle of the century' between these two heavyweights in September. Perhaps Zhabotinsky will be the first to reach the 1,290 total that Vlasov predicts will be, approximately,  the plateau at which the record will 'stick' for a while before eventually moving on again to 1321.

This month I will analyze film tracings of Leonid Zhabotinsky's clean and jerk, from movies taken during the actual breaking of a world record. The tracings are taken from movies of him lifting 469.5 lbs - a world record mark prior to his Tokyo onslaught.

Zhabotinsky's pulling technique for both the snatch and the clean is equal to that of the best technicians in any weight class.

In the first picture you can see that he adopts a position very close to that which I have advocated over the past few years. His legs are bent at less than the 90 degrees advocated in Russian textbooks. His shoulders are placed ahead of the bar.

In the second picture you can see that Zhabotinsky has lifted the bar from the floor to his knees. His shins have moved back as the bar moved up until they are nearly vertical. You will note that Zhabotinsky keeps his head, chest and shoulders in front of the bar for as long as possible.

In the third picture you can see that the bar has passed his knees, and that his hips are being swung forward and upward toward the bar as it passes his thighs. But note that he still keeps his face and chest in front of the bar. His forward and upward hip thrust is very vigorous, shown by the fact that in the fourth picture his hip thrust has carried the tremendous weight forward. The shading on the nearside disc in the fourth picture clearly shows this.

In the fourth picture, if you place your finger over Zhabotinsky's head, you will see that his body is nearly vertical and that he is high on his toes. Still referring to this same illustration, you will note that although the bar is passing hip level, his arms are starting to bend. Until this point they have more or less maintained their starting position. It is only at this stage, where Zhabotinsky has completed his leg and body extension, that he bends his arms strongly as he comes high on his toes to add impetus to the bar. It is from this position that he leaps astride (see fifth illustration) in order to lower his body under the massive weight. Owing to the fact that the barbell is traveling upwards and slightly forward, Zhabotinsky is able to pull backward on the bar as he passes through the fifth position. This is only possible and advisable when the hip kick from position three sends the barbell into an upward and forward direction, as seen in position four.

In the fifth picture, the barbell is traveling slightly forward. The forward momentum of the bar, developing through positions three, four, and five, is neutralized by Zhabotinsky's pull back. In the fifth picture, also note that his knees are held well apart to permit his hips to come forward and low, close to the line of his heels.

Zhabotinsky's forward hip thrust is so powerful that he is one of the few lifters in any class who refrains from jumping back. You can see that the foot positions in the sixth picture are actually slightly ahead of their starting positions.

The seventh position shows the mid-position during recovery and the eighth picture shows Zhabotinsky's starting position for his world record jerk. His body and legs are vertical, his elbows are held forward to secure the bar solidly against his chest and shoulders. His initial dip at the knees prior to the upward leg thrust, which will send the barbell to arms' length, is shown in the ninth picture.

In the tenth picture, he is shown beginning to exert upward force, which is completed as shown in the eleventh picture, where Zhabotinsky is high on his toes as the barbell leaves his chest. is split is not deep, because as the barbell clears his head - due mainly to the leg thrust - he pushes vigorously upward with his arms as he leaps into the fore-and-aft split.

In the twelfth picture Zhabotinsky is solidly balanced beneath the weight, with arms and trunk vertical and the barbell under control. To recover, he tips the barbell back very slightly, using his rear leg as a prop as he pushes upward and backward with his front leg to replace the forward foot into the position shown in the thirteenth picture.

The final illustration shows how Zhabotinsky brings his rear foot up in line to hold this fantastic weight overhead, at which point the referee and judges approved the lift as a then new world record.