Let's turn our attention for a moment to the Warren Lincoln Travis one-of-a-kind championship belt. Nearly 100 years ago, this belt recognized Travis as "The World's Strongest Man."

In 1906, Richard Fox, owner of the popular sporting newspaper, The Police Gazette, was sure a head-to-head lifting "shoot-out" between fabled French-Canadian powerhouse Louis Cyr and the renowned muscular strength idol Eugen Sandow, was a matchmaker's dream. In an attempt to further facilitate this clash between the two biggest names of the strongman genre in that day, Fox prepared a diamond-studded, gold and silver "championship belt," which would officially recognize the victor as the "strongest man in the world."

In truth, this belt was befitting of such a prestigious title, as its rumored worth just after the turn of the 20th Century was $2,500, a sizable piece of change nearly 100 years ago. Historian Dave Willoughby reported the figure as well (The Super Athletes, p. 81), so this appraisal seems valid.

Try as he might, though, Fox could not induce Sandow to accept the challenge. In all fairness, Sandow was several body classes lighter than Cyr. Plus, a loss is a loss in the eye of the public, so it's hard to picture Sandow recognizing any reason to participate.

Enter Warren Lincoln Travis. By the fall of 1906, Fox's promotional aplomb prompted him to approach Travis about accepting this lavish belt and defending it against all worthy comers for a period of 10 years. In an article in the August 1937 Strength & Health, Travis listed two simple conditions Fox placed on its acceptance:

1) Each man (Travis and challenger) had the right to choose five or six lifts apiece, and

2) The belt had to be defended anywhere in the world designated by the challenger, with the understanding a side bet or gate percentage could be arranged. 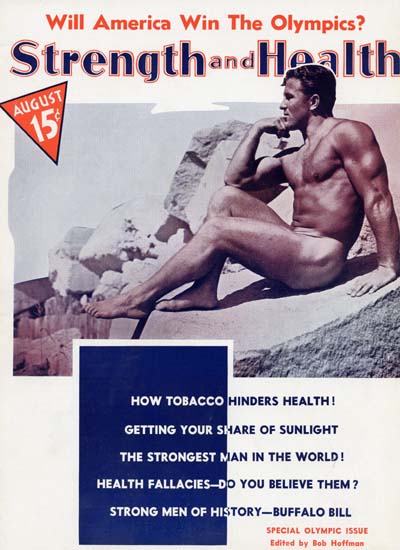 Of course, Travis took Fox up on his offer an did defend the belt for 10 years, after which it became his personal property.

Readers probably wonder why Fox tapped Travis after the Cyr versus Sandow match-up failed to materialize. It's not as though Travis was a total unknown in 1906, not by a long shot. At 20 years of age in 1896, Travis (real name Roland Morgan) was lucky enough to receive personal training from Professor Louis Attila. The invaluable nature of his teaching can be summed up by noting that the list of professional strongmen who benefited from Attila's marvelous guidance reads like a "Who's Who" from the Golden Age of Strongmanism.

Plus, Travis had already put in his apprenticeship, giving exhibitions in gyms and training halls of New York City and Long Island under the moniker, "The Brooklyn Strongboy." Long before 1906, he had graduated to working first-line theaters and venues, as well as earning distinction via other avenues. For example, Fox became an admirer of Travis' in 1903 when the latter won a prominent harness and back lift championships. In fact, Fox was so impressed with Travis' prowess on this occasion that he presented him with a diamond medal.

No doubt the final cementing bond between Fox and Travis was a shared admiration for the exploits of Louis Cyr. Noted writers like Siegmund Klein and Earle Liederman contend that Travis definitely patterned himself after the Canadian behemoth.

When one realizes that Warren Lincoln Travis was giving sporadic exhibitions upon his death at age 65 (in 1941), it seems hard to believe he was able to overcome the challenge of rising young strength stars and retain the championship belt Fox bestowed on him 35 years before. Suffice it to say that when the belt became his personal property, the conditions under which challenges would be accepted changed radically.

For example, disputants to his World's Strongest Man title belt had to put up $10,000 (that is not a misprint) for the right to meet him in a contest. However, Travis would put up the same sum. Apparently Travis had his fair share of eccentricities. He routinely carried $10,000 in large bills in his watch pocket in anticipation of an immediate challenge. In the October issue of S&H, longtime New York City gym owner Sig Klein maintained that when Travis visited his gym, which he did with regularity, he always had the $10,000 on his person.

The other prime stipulation laid down by Travis was that the winner of such challenges would be determined on the basis of total gross weight lifted in all tests combined. Bearing in mind that he was most adept at ultra-heavy tonnage lifts like the back lift, hand and thigh lift, hip lift, deadlift, and other movements involving 'big numbers,' this tilted the playing field decidedly in his favor.

The dollar requirement specifically prohibited strongmen new to this country from bothering Travis. Moreover, the second requirement had the net effect of freezing out the terrific barbell/dumbbell lifters.

This issue of money is not lost on visitors to our (York) museum who often inquire about the earning power of these top drawer strongmen in the early part of the 20th century. As a long-running attraction/matinee idol of the Ziegfeld Follies, it's hard to envision anyone surpassing Sandow's reported $1,500 to $2,000 weekly.

On the other hand, the honors for greatest single weekly take would seemingly go to Siegmund Brietbart. Historian David Webster reported in his book, Sons of Samson, that during Christmas week of 1923, Breitbart performed before more than 85,000 spectators and earned $7,000.

Even in the 21st century, this is as eye-popping remuneration for a week's work to most. Bear in mind, though, Brietbart did not command this sum every week. Still, those stellar drawing cards that played the higher profile venues with more frequency clearly did well.

The fact that Travis walked around with $10,000 on his person (and let's not forget the jeweled medal and belt from Fox), suggest that he did not suffer in the pay scale derby either. Still, during his long run as a Coney Island performer Travis generally earned his fortune one nickel at a time. In fact, this was the individual price of admission to the Coney Island Circus Sideshow ( which included Travis) pre-World War I, according to Earle Liederman in the June, 1963 issue of Strength & Health.

However, after World War One things perked up for Travis as Sig Klein reported (October 1956 S&H) that in 1924 the going rate to see Travis was up to 25 cents a head.

Please realize that Travis averaged nearly 20 shows daily and showed up for work nearly every day of the week. Upon considering the style of act he did, combined with how often he performed his act, Travis should have received the diamond belt just for surviving this grind for so many decades!

Due to his flamboyant and eccentric personality, there are a couple of unique mysteries concerning Travis that could be explored. One that begs to be addressed is the odyssey his beloved belt traveled before residing in the York museum.

Upon his death in 1941, he left a rather odd will, especially regarding the belt, which amounted to a challenge to future strongmen he envisioned vying for it. A partial quote of the passage pertaining to the belts disposition (as it appeared in the August 7, 1941 New York Times) outlines the following wishes: "I direct that a certain diamond-jeweled gold and silver belt presented to me . . . be offered in open competition and be awarded to the man who at least will have equaled the record made by the testator herein by performing the following 10 feats:" (Travis here laid out what he felt were his 10 best lifts and stipulated that they were to be done within 30 minutes.

2) Bring a pair of 90-lb dumbbells along the sides of the body to the shoulders and slowly press them overhead.

4) Single finger lift with 350 lbs from the floor eight times in five seconds.

5) A single finger lift from the floor with 560 lbs once.

Obviously, Travis slanted the criteria toward a clone of himself - a strength-endurance oriented specialist who was adept at shallow range reps with 'tonnage-style' lifts. Hence, the rep versus time requirement of certain feats, as well as the overall time limit.

While the gauntlet had seemingly been thrown down, assuming Travis was genuinely looking for a successor, I find no evidence that suggest anyone took on the challenge. Why? The Golden Age of Strongmanism had largely passed, and along with it the practice of the hip, harness, and hand-and-thigh lifts. Olympic-style weightlifting, and bodybuilding were gaining popularity among the burgeoning generation of the 1940s. And let's not forget that threatening national distraction known as World War II, which prompted so many lasting changes within our culture.

Over the ensuing 20 years after Travis' death, the 'trail' of his belt faded into oblivion. That was, until the April 160 issue of S&H (page 26), which carries a photos and the caption that it was on display in the York Barbell Museum.

Who possessed the Travis belt between 1941 and 1961? To date, no amount of detective work has produced a definite answer. However, the "Iron Grapevine" section of the February 1962 S&H offers a strong clue. Mentioned therein is the donation of a fluted, thick-handled dumbbell to our museum by one-time New York City gym owner/Iron Game personality Harry Shafran. Also mentioned is the extensive collection of strongman paraphernalia and memorabilia in Shafran's possession, much of it once the personal property of Warren Lincoln Travis.

Terry and Jan Todd looking out of what used to be a window in
the gym Harry Shafran established in a huge barn built in the late 1800s.

Again, no irrefutable proof, but nonetheless a plausible explanation as to how our museum may have come by the awesomely gigantic Travis dumbbell spotlighted in our last edition, as well as his glitzy championship belt.

In closing, the various attributions included were done for more than mere journalistic sourcing. As readers probably surmised, Travis was a genuine 'character' in just about every sense of the word. Hence, the articles authored by Sig Klein and Earl Liederman, in particular, in which they relate various interactions with Travis down through the years are not only entertaining, but give more insight as to how quirky Travis really was.