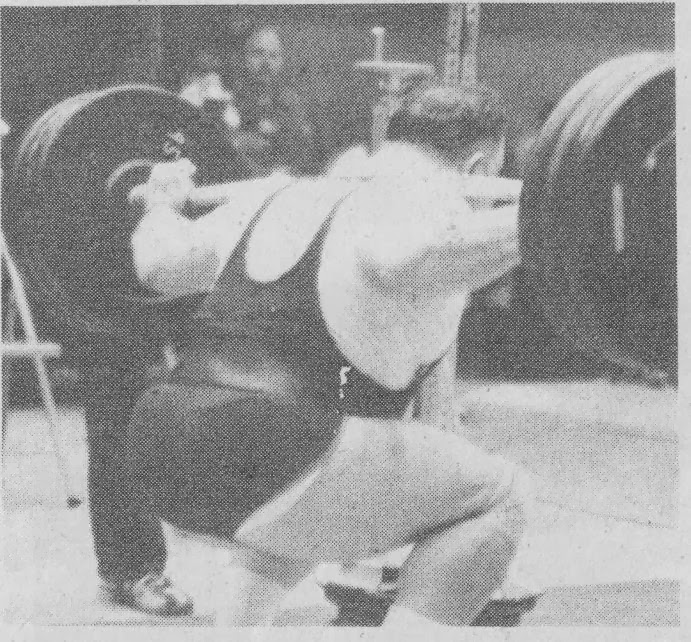 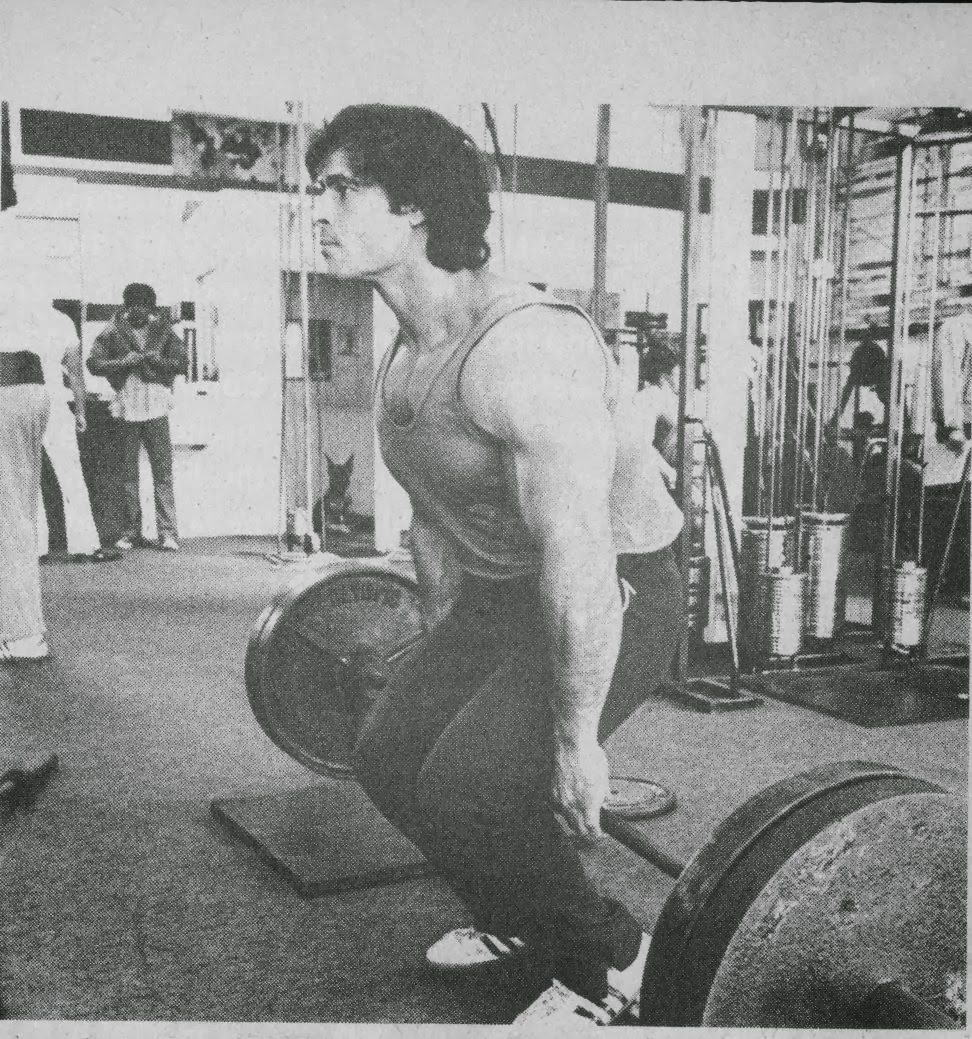 
Squatting places great physical and psychological demands on the lifter. The lift is far more unstable, as far as the lifter's posture is concerned, as compared to the deadlift . . . even though less weight is normally hoisted in the squat. This unstable, top-heavy posture is the main reason that less weight is lifted, even though more big, powerful muscles are put into play. Oh, sure, you can argue that there are greater leverage differences in the squat's execution, more direct strain on the knee joints, etc., but this is just a cop-out of sorts. It is just more difficult to train the body and mind to cope with these 'obstacles' and the result is more hard work than is usually encountered with other lifts. The fact is, if you really want to be a good, champion squatter, you'll have to make up your mind to train harder than usual on the squat. Period.

Naturally, there are such considerations as sore or damaged knee joints, groin and leg muscle injuries, inconsistent energy reserves, etc., etc. But these problems are normally end products of poor nutrition, lack of rest, inappropriate workloads and negative attitudes that excite the endocrine system and later body chemistry.

A good, healthy, happy and friendly competitive mental attitude is mandatory for physical/chemical well-being, and so is a careful diet. Powerlifters require enormous quantities of certain vitamins and minerals since the great demands they place on their body and will power use up their stored every workout, much like a heavy truck going uphill uses gas, wears parts, etc. Sore joints are partly caused by not warming up properly, but are often caused by a lack of the mineral manganese, which is found in high concentrations in the tendons and connective tissue. Most people are extremely deficient in this mineral - especially the athlete who need it most of all! Tendinitis can sometimes be corrected or minimized by large quantities of this mineral.

The squat appears to be about the easiest exercise to perform . . . disarmingly simple in performance, and not  requiring any great athletic or gymnastic technique. That is essentially so, but it will fool you when you start to get into the intermediate stages of development where heavier weights are used, stress builds up, and strength and energy demands start to compete with your natural and designed ability to cope with them. I cannot possibly hope to go into the multitudinous facets of this complicated physio-chemical make-up of the stress-oriented athlete at this time, except to say: eat, rest, think, and train properly. This article is primarily involved with the squat exercise and the auxiliary exercises to help you increase your power in the squat.

ANATOMY AND PHYSIOLOGY OF THE SQUAT

The squatting muscles are:
1) Gluteus Maximus - extends femur thigh bone; straightens thigh until it is in line with the torso.

With the barbell high up on the shoulders, the lifter finds himself in a rather unstable, top-heavy posture; his center of gravity is raised and he is prone to topple easily. The actual act of squatting increases this possibility since the motion further destabilizes this shaky posture. The training routine I will give you to increase your proficiency in the squat will do a number of things: increase your squatting coordination, neuro-muscular efficiency, strength, and most of all your confidence to do heavy squats. None of this is separate, or isolated; but rather overlaps and as with a chain, is as strong as its weakest link . . .

Warming up, of course, is always important. Here is one very good, and rather unusual general warmup exercise for your squat program (Note: while performing all the exercises herein, use your normal lifting shoes):

1) Bodyweight Multi-Squats -
Stand erect, with feet about 12 inches apart, toes pointed out to the sides. Now squat down fully for about 10-15 reps, then immediately point the toes inward and squat fully for another 10 reps or so. Now, without rest, place feet about 24 inches apart and squat fully for another 10 or so reps. Now comes the good one! Still without resting, immediately spread your feet about 40 inches apart front and back, split style (this will vary depending on your leg length) and do a one-legged squat-stretch, alternating between legs until tired. Be sure to straighten both legs while switching over each rep. Do 1 or 2 sets of this warmup exercise. Rest about 5 minutes, then go to . . .

2) Leg Extensions -
The purpose of this isolated thigh exercise is to more fully strengthen the thigh muscles and the large common tendon that the Quadriceps Femoris group terminates in, and that passes over the knee cap to its attachment, the Tibial tuberosity, on the front of the lower leg just below the knee.

Do this exercise with both legs engaged simultaneously rather than one leg at a time. When the legs are fully extended, hold the weight in this position for 1-2 seconds, then lower slowly and repeat for 4 sets of 5 reps. Rest  about 30-40 seconds between sets. After the fourth set rest about 3-5 minutes and go to . . .

3) Low Position Half Squat
Lack of strength (nerve force) in this low, awkward positions causes lifters to fail to gain upward momentum necessary to overcome gravity and complete the squat. Balance, too, is often lost somewhat at this point, while the lifter tries desperately to compensate for this weakness by altering his posture to bring other muscles and/or skeletal leverage into play to help the leverage-weakened thighs and buttocks. You'll have to experiment with the amount of weight you will use for this exercise. You might start with about 1/2 the normal squatting poundage you use for 4-5 reps, and work up from there.

Hold the bar, and use normal foot placement, as you would for your regular squats. Lower your buttocks fully, not just to a point where the thighs are parallel or slightly; then raise up only half-way, lower and repeat for six reps.

Have something to measure this height with, such as a string tied between the squat racks at such a height that when you are at this desired half-way position it will be at eye-level. Also, be sure to have good spotters or rack catchers while doing this exercise! Do 5 sets of 6 reps, resting 3-5 minutes between sets. Now rest 5-7 minutes and go on to . . .

4) Jump Squats -
Again, balance is developed - but more importantly extremely violent nerve force is developed in the locking-out of the knees and the straightening of the lower back.

Stand erect, hold two dumbbells at the sides (totaling about 1/4 the weight of your exercise squatting poundage - if you do 400 lbs x 6 reps use two 50 lb dumbbells, lighter at first until you become confident here). Proceed to squat down and jump up as high as possible. When landing on the floor don't stop dead; actually lower yourself right back down into the squat again and immediately repeat smoothly for about 5-6 reps. Do 2-4 sets of this valuable exercise, resting 2-3 minutes between sets. After the last set rest for 5 minutes, then go to . . .

5) Endurance Barbell Hack Squat -
This is for endurance while you perform one maximum attempt, even though it's done here with high repetitions. Mental tenacity is needed to excite and maintain muscular contractile force - and this exercise will do it.

Hold a barbell at the back of the thighs, just below the buttocks (1/4 the weight of your maximum single effort in the squat). Proceed to squat down as far as possible with your back very straight, eyes to the front. Return to standing position and repeat until you cannot possibly do another rep. Even finish your set with partial hack squats when you are too exhausted to do full reps. Only one set, but completely extend your energy here - when you do all that is humanly possible, then do a few more! Rest about 5-7 minutes, then go on to the last exercise . . .

6) Forced Bodyweight Squat -
If you think that bodyweight and "calisthenic-type" exercises are for sissies and old men trying to stay in some form of physical shape, you'd better take another look at these exercises. When done properly, such exercises as bodyweight pushups, dips, chins, squats, situps, etc., can do wonders for single-attempt strength lifting. The seemingly endless repetitions definitely develop neuro-muscular coordination (muscle learning), tenacity of nerve-force that is needed to constantly prod a muscle to contract, and then to maintain this contraction without giving up or fatiguing rapidly.

Hold an Olympic bar on your shoulders in your regular squat position, foot placement the same, then proceed to do as many full squats as you possibly can. Don't quit until you cannot move at all from the low position. This is your last exercise so you may want to do more than one set. You be the judge for each training session.

Beginners should not do this routine until they have exercised hard on the squat for at least one year. Regular training on the squat is sufficient at first, even necessary as it develops good basic muscle learning, etc., in this lift. Faster progress can be had by taking the steps in order.

Intermediate lifters and beyond, while specializing on this program, should do a minimum of bench press and deadlift training so as not to burn out. Naturally, this varies considerably with the individual. You know your limit. I can't set it for you.

Suggested routines are as follows:

This routine DOES NOT TAKE THE PLACE OF YOUR REGULAR STRENGTH TRAINING which needs to be comprises of many near-maximum attempts, but is rather a routine that will definitely be of value to those who are in a slump, burnt out with regular training, have weak spots in their squatting technique and certain areas of strength potential. Use this program for three to eight weeks whenever one of these problems are experienced by you.