What Every Greenhorn Should Know, Part 3 -Joseph Curtis Hise 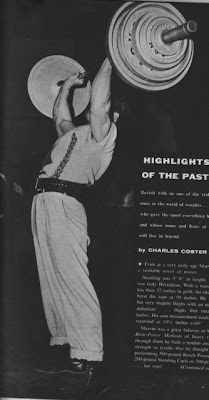 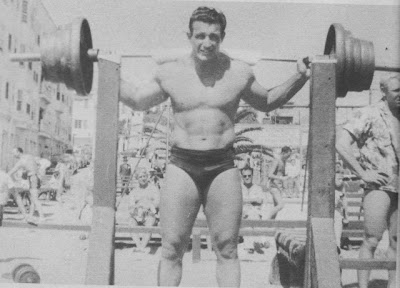 What Every Greenhorn Should Know, Part 3
by J.C. Hise

For example, three boys I know (now about old enough to vote) tote chests in the four foot class. Their greatest chest gains were about 1½ inches in a month using what we chest specialists call “correct exercise”. These boys are “slow gainers” and so experienced they can change their exercise repetitions every time it is necessary . . . something successes must learn. One boy was 16 years old with a 46 inch chest. He had “three years” exercise – one month at 14, two months at 15, and two months at 16. He exercised every time he was due for a new suit of clothes, hence the reason for his “small gains”. His height was average for a 16 year old boy, and can be classified as a “fast gainer”. John Grimek exercised from 18 to 21 with scarcely a miss . . . gained very slowly and persistently. After he is 21 he grows with the greatest of ease. He is our “faster grower” and “faster loser” that we know of. He can almost change his size by power of will from 180 to 225 pounds. He is an example of the exerciser changing his type.

What should the beginner eat? If you are fed an omnivorous diet you need not change. I know of only one great strong man and exerciser, John Henry Miller, who is a vegetarian. It is a matter of taste on his part and he is not proud of it because he is such an outstanding exception to the rule. Many men when exercising are almost 100 percent meat eaters . . . when not training they slip back into normal omnivorism. Jim Evans, who has probably the largest chest of the lightweights, tells me that when in vigorous training he lives almost entirely on pork . . . when he eases up he retreats back to beef. He can stand but very little pork when not training hard. He never wasted any time on debating why, but observation taught him which was best for him. The alleged reason for this is that lard is high in linoleic and linolenic acids . . . VERY ESSENTIAL FOR GROWTH, and are very rare in most foods. Farm made sausage or home made sausage is pork ground up with fat and makes very appetizing large quantities of lard than your taste could otherwise endure. Hence, it’s extremely popular with the “never fail gainers”. If you can’t gain on huge quantities of genuine sausage, such failure can not be in the type of food but unbalanced exercise or nervous strain or lack of sufficient leisure for recuperation.

There is nothing that melts away national stupidity so rapidly as strong healthiness among the populace. Large quantities of omnivorous food is necessary to erase stupidity and improve the health and power of the people. I know mountaineers of every race who, though stronger than the average plain dwellers, may still be stiff between the ears because of either poor quality food or insufficient supply. While they are invariably strong on personal liberty and devil their neighbors they still may lack good sense of the degree approved by well fed philosophers.

I believe in the wide spread application of weight training on the populace because of the mental and character benefits that they will fit themselves for. Such things as massive physiques, great strength and more favorable opportunity for long life and economic rating are just some of the delightful flavorings that makes one’s life one long joy ride to the lazy . . . though wise . . . healthy philosopher.

The ancient Greek dramatists knew well the diet peculiarities of strong men. Hercules when on the stage could spot a pantry as far as a bird dog can an ostrich. A strong man with a 38 inch waist has an appetite . . . one with a 26 inch waist has at least four big appetites. Those wasp waisted champions 15 minutes after a meal look like a python that has swallowed a Percheron horse. An hour later they look as thin as before. Many of the thinnest waisted ones have to live with one hand in the pantry and when they go out on public excursions have to have a couple of admirers carry a pair of gunny sacks loaded down with two or three hours’ food supply. One of these champions (on chow and weights) is annoyed with handshaking . . . because accompanied by his gunnysack toting flunkies he usually has a sandwich or so in each hand and reaching for another and time out handshaking is very hard on his food intake. Of the peewee champs I believe that Terlazzo has the “smallest” appetite and the only present heavy-weight that I know who has an even break . . . or can defeat the peewees “on the table” is Weldon Bullock. The gold medal winners and appetite champs unanimously endorse the superiority of Bullock. Hercules and Bullock should be the heavyweight fans’ saints because only those two have the certainty of proving that the BEST big eaters can win against the BIGGEST little eaters.


Beginners usually worry over their exercise periods per week. The first three years Grimek every other day with hardly a miss. After he developed into a “grow when I please” type he lost all such punctualness. Punctuality is a very fine servant but a very poor master. Most of the best instructors recommend three exercise periods a week and extend the advice to not worry if duties push it down to two or even one period some weeks. Many of the biggest chested men think that twice a week is best. Walter Podolak in his amateur days showed decided preference for about once a week after he became of good size. Three times in two weeks fits me almost as good as five times in two weeks. The latter seems best for a combination of rapid gains in strength and size in my case. A much rarer number differ altogether in the way they exercise but no beginner has any business knowing how such and such have to perform their exercise. Every beginner that we know of has made the most absolute failure on other exercise customs wherein it is advocated to exercise oftener than every other day.

How long does strength last? Will I lose it? Does one have to be born strong? Everyone has a born strength potential that he cannot go beyond. So far no one has ever developed near his biological potential. I believe that we will get some accurate ideas of the limitation of man’s biological potential in the next hundred years. Many of us feel sure that the present records are within the potentialities of the most ordinary humans. Those who are born “better” than the others, even though they may be the slowest of slow gainers, lose perhaps not over two percent of their strength when they quit training. Some claim to lose none and are truthful at the same time. John Henry Miller claims there is no change in him. I would also believe this is so of such “better men” as Jack Kent, Bob Mitchell and John Terry. I believe that the worst types of manflesh lose close to 25 percent. I lose close to 15 percent under the same conditions that bring no change to John Henry Miller. Grimek loses around 10 percent I think. He is “better” than me and yet was not born the “best”. A poor specimen may retain it all by exercising about once a month. We have every reason to believe that such a strong man will be in the mid-sixties before his strength begins slowly to ebb and the day he dies he is always stronger and superior in every way to his average competitor. He has been alive every day since he became a weight exerciser. His wide awake life may stretch from sixty to ninety years since his weight training began . . . yet his companion in age may have never been awake a single year of his life and very seldom as much as twenty or thirty years of “real perceptive life”. So it is entirely possible that the strong man may be really three or four times the age in useful experience of his twin in chronological years.

WHEN YOU ARE BORN, YOU ARE SET FORTH TO DIE.

THE FACT THAT YOU LIVE OR DON’T LIVE
BETWEEN THOSE TWO DATES
DEPENDS SOLELY ON YOUR OWN WILL,
OPPORTUNITIES AND DESIRES.


THE WEIGHT EXERCISER, OF COURSE,
INDICATES THAT HE CHOOSES TO LIVE.