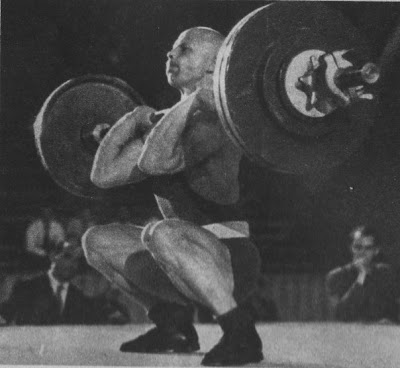 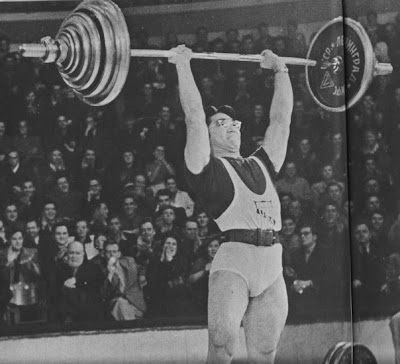 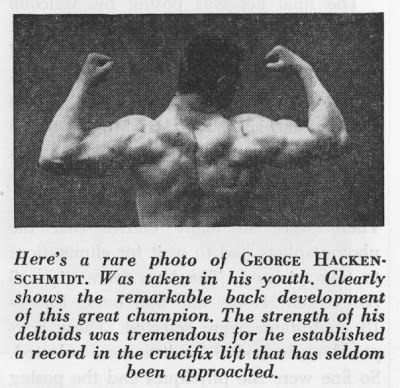 Thoughts on Lifting
by Harry Burns (1954)

It’s so obvious – you almost want to kick yourself! Wide shoulders, deep chests, thick legs – where do you find them: All together, I mean. On Olympic lifters. No other combination of three movements provides the stuff Olympic lifting work turns out. Stamina, endurance, vitality, strength. What more could you want!

Press, snatch, clean & jerk. Develop these lifts to the maximum and you can’t avoid maximum strength development. Easy enough to state, eh? Nice and encouraging to read too. But banging away night after night turns one off somewhat. Makes the bars and movie theaters draw might hard. The old sweats sit back and say, “To improve the Press – keep pressing! Press on, regardless. Keep cleaning till you can do it with your eyes shut. Very soon you will find yourself going through the motions in your sleep as well as at the gym. There’s no future in that.

It’s high time barbell men told the Physical Culture peddlers to wrap up the fancy phrases and go back home. We know what it really costs to get “rippling muscles” – “dynamic energy” (whatever this is) – “a body like mine” or any other “star”. We know that no one has enough energy to fritter away on armchair-based experiments. We know the disgust, sometimes fury we are left with after following some blowhard’s optimistic blah promising the moon. WE KNOW – often when it’s too late, that commercial advertising can convince a gullible man to distract his efforts and energies away from what little logical methods of lifting can be found. Lured from the straight and narrow by lurid promises of short-cut secrets. Highly geared moneymaking businesses care less about individual requirements for lifting success than they do of sales records.

Bet yourself down to it and convince yourself of what you have known long enough. The big lifts will bring out the best in the shortest time. The Egyptians found this out with the quick lifts at the end of the 1920’s. The Americans remembered it a few years later, as did the Germans, the Japanese and the Russians. The top-flight weightlifting nations practice little else but the actual lifts and a few auxiliaries. They plan their training to include ONLY what will improve lifting strength. You –as a true lifter – know without me telling you that there is little if any surplus energy left to expend on fancy and foolish exercises after an honest workout on the big lifts.

How do the other lifting nations train? It can’t be as simple and soul-destroying as press – snatch – C & J ad nauseum. A lifter isn’t afraid of hard work. He wants to know he is doing the right thing in his training and not being the dupe again to some commercial interest. The truth – as you have so often read, but hesitate to believe when the going gets tough – is in utilizing the three Olympic lifts and their variations as the main pattern for training.


A number of approaches to barbell training resurfaced before the War. Heavy and light; three practices a week; five a week; heavy, light and medium training days, and many more. These are all good ideas and bring new lift the routine of lifting when it gets dull. But they magnified what can be a dangerous practice – becoming a slave to routine when the routine has lost its usefulness. Flexibility is essential in planning training programs. Mechanical applications on a prearranged schedule can only go so far. The schedule can remain fixed but its APPLICATION must be variable.

Three main points should be considered in any workout plans:

1.) Style. Its cultivation and perfection. Style is the correct application of effort ensuring 100% use of strength. Transmission of available strength and power should be at the lifter’s command.

2.) Power. Its development as associated with the whole body directed towards the lifts concerned.

3.) Conditioning. The production and maintenance of a high degree of tone and fitness in the individual.


The road to improvement in lifting is through intimate knowledge of your powers of recuperation. Being able to recognize when to push and when to lay back are two of the most important “secrets” you can learn. Hard work applied, without one single ounce of energy wasted on movements of no use to you personally, this is the direct route to progress.

Energy quickly dissipates by dogged slogging away at the same lifts using limit or near limit poundages for too long a period. A young man came to see me not very long ago, in a state of despair. His Press was below standard and he had “concentrated on pressing with all his energy.” I asked him about his training routine. It included high repetitions, four or five sets, using weights below his limit. He always proceeded to then work through to his top weight in each and every training period. Then he went through a miscellany of heavy squats, deadlifts, dumbell presses, leverage exercises, etc. He was exhausted. His energy output was almost nil. He drove himself constantly, under the misconception that the stronger the work given to the body, the stronger it will become. He knew nothing of recuperation. In addition to a constant subtraction from energy and a growing fatigue, his fund of nervous energy had been severely depleted over time. As a whole, he was well on his way to complete collapse.

I made him promise not to touch a weight for a month. After that he worked for a month on a planned program of training that left a margin of energy and power untouched at each workout. His power and energy were allowed to grow progressively. All his lifts improved and his bodyweight increased. He was stronger, much happier, better conditioned, with abundant energy and strength always in reserve.

This might be your case. It might only bear some similarity. Learning the hard way often leads to the better way.