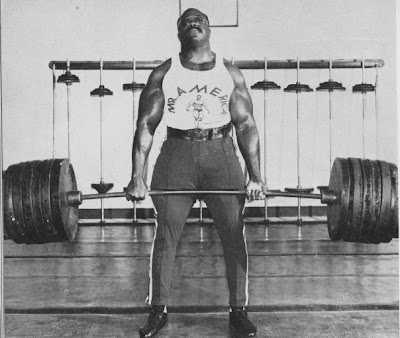 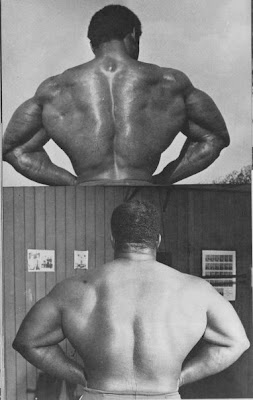 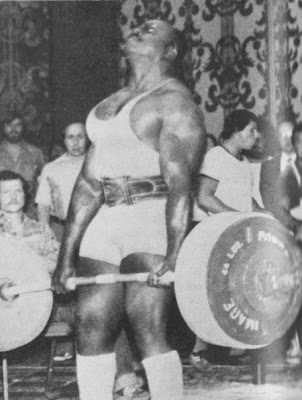 On August 27th, in , Ca., David Shaw won fourth place in the 275 lb. class in the 1978 Senior National Powerlift Championships. To do this, he totaled 2039 lbs., and had his precontest warmup gone as he expected he would have totaled much, much more. On this day David had planned an 805 lb. squat and deadlift, and these two lifts would have pushed his total to over 2100 lbs. Since Dave and I are friends and have been corresponding with each other for the past few years, I felt that many of you fellows would like to know more about the man and his particular training schedules, etc. I would hope that he would be both an inspiration and a good example for us to follow in our quest for increased strength and development. I say BOTH strength and development because this is the particular aspect of Dave’s physical achievement in that he not only IS strong, he LOOKS strong. In fact, I doubt if there is a more muscular 275 pounder in the today!

As I mentioned earlier, Dave was geared for an 800 squat at these Senior Nationals, having done a double with 755 and a single with 775 (I believe) two weeks before the meet. However, he injured his thigh around the hip area at this time and he had hoped all things would be cleared up by the time of the Seniors, but such was not the case. As it happened, he injured his thigh and hip once more, backstage warming up, right before he was to take his first attempt squat and this is why he was able to take only his 1st attempt at the Seniors. It was because of this re-injury that he took fourth. Dave Shaw was and is capable of much, much more.

The following letter was sent to me September 28th, and within its pages is a complete resume on David Shaw, the man and the lifter. I wish to share it with all of you. I also predict that he will be our next 275 lb. champion.

Here are the answers to your questions for the article. Enclosed is a picture of the 804 deadlift. Although I expected this lift to go hard, in essence it was quite easy. My training is going fairly well. My leg injury is a lot better as I squatted with 500 for 5 reps September 22nd. I will continue to add 10 lbs. a week to the squat and in 15 weeks I expect to squat 650 for 5 reps. At that time I will start deadlifting every other week. I will not do single reps on the squat until 12 weeks before my next contest, which will be in in April or May. I expect to do 810- 520- 810. My goal is to be on the World Power Team for 1979 in , at 275.

When I first picked up the weights, I bench pressed 125 and squatted 175. As most beginners I wanted to become as huge as possible with muscular size. And I might add, that in the beginning, I didn’t have much trouble putting on muscular bodyweight and as a result of my training I grew to 235 lbs. by the time I graduated from high school. I also bench pressed 350 and had 18 inch arms at this time. Initially, I wanted to train with the weights so as to aid me in shot putting (my high school record still stands) but the more I trained, the deeper I got into this new preoccupation and in the long run, I finally decided to join a commercial gym. My first choice for a gym was the Pasadena YMCA. It was at this time that I met Richard Kee. At the time I first met him, he looked to me like the widest shouldered man I had ever seen. And his strength was phenomenal. He wrote routines and diets for all the younger trainees and was always willing to give of his free time. It was from Richard Kee that I received my first routines and diet plans. I really owe him quite a bit in the way of thanks. He really helped me a lot.

A popular gym in at this time was Joe Gold’s Gym in . It was here at Gold’s Gym that I met Steve Merjanian and I credit him with much of my training inspiration and current progress. Up until I met Steve, I believed anyone who trained solely for power would wind up fat and sloppy, but big Steve really opened my eyes! For here was a man of immense size and strength with excellent muscle shape. It was then that I decided that muscle shape and strength could be combined with somewhat miraculous results in power and physical impressiveness, and since this time I have trained with both these concepts in mind. I have also come to know Steve quite well over the years, and I must add that although he never trained on the three powerlifts with any diligence, he DID train for years with Bill “Peanuts” West, Pat Casey, and other pioneers of American powerlifting. His training knowledge is vast and whenever I have a training problem, he is one of the first people I contact. I no longer train at Gold’s since it has changed hands. I now train at the World Gym with Dave Johns whom I credit with helping me in many ways with my training.

My powerlifting goal is to achieve the maximum potential my body is capable of. After I achieve this, I would like to concentrate on other movements, such as the seated press, dumbell press, and other heavy pressing movements which are not presently competitive lifts, yet are still impressive and make a person strong. I feel the powerlifts are fantastic for strength, yet true strength goes beyond three lifts.

I believe muscle size is increased through repetitions with a progressively heavier work load. I believe in mixing up repetitions. For quality muscle, move from light weights with high repetitions to heavy weights with lower repetitions. After you have reached the last set, remove 50 to 70 lbs. and do several sets of 6 to 10 reps. A well-balanced diet, emphasizing all the food groups will guarantee growth. Supplements are important, but with the high pitch commercial sales you could spend your paycheck buying supplements and you still have to buy groceries. So if you can’t afford the massive supplementation you supposedly need, get a milk and egg protein, B complex, wheat germ oil and maybe some digestants and some C, and you’ll be able to get along just fine.

As far as diet is concerned, I generally eat but two meals a day. I do NOT overemphasize any one food group to the exclusion of others. For optimum health and strength you must eat those foods that are nutritionally sound. Try to stay away from junk foods of all kinds.

If you want to improve a lift, go to someone who is good in that lift. This way, you will not train in a hit or miss fashion which often leads to disappointment and confusion.

After training for some time with Marv Phillips, I squatted an easy official 760 meet record at the Nationals at . My own squat routine had me doing heavy doubles on Tuesday and a heavy single on Friday. This led to bad recuperation. Marv had me change to heavy sets of 5 on Tuesday with a heavy single on Friday. Since then, my progress has been a steady up and up affair. No assistance work was done for the squat of deadlift (which was done after squats on Tuesday). Then pounds were added weekly to the squat and deadlift.

The bench press is, to me, the best upper body developer there is and I always make sure that I include enough work for the bench to insure continual progress. While it is not possible for everyone to bench press 500 lbs., I am sure that every lifter can improve if he will only train regularly and sensibly. My present bench routine consists of one heavy day and one light day on the bench, along with dumbell benches and seated barbell presses.

I work the deadlift once a week, after the light squats on Tuesdays. I do not do reps in the deadlift, since I feel that reps in the movement cause poor recuperation and easily lead to overtraining. So after squats I take 245x5; 445x1; 545x1; 645x1; 700x1; and finally, 725 or 750. I believe good deadlifters must continuously watch their style for flaws, etc., which may be picked up along the way. Hand and foot spacing are also very important. At the ’77 Nationals I deadlifted 688 with no prior coaching of my style. One year later, at the ’78 contest, I deadlifted 804 lbs. This improvement was due partly to training with Marv Phillips for the past year and having him analyze my style and correct any mistakes.

I believe in self-discipline and training dedication. You must decide what it is you wish to accomplish and not allow anything negative to stand in your way. You must control your environment so that it becomes conducive to steady progress. To become a champ overnight is everyone’s dream, but it happens to only a few people. My advice to beginners is to realize from the outset that there are no shortcuts anything worthwhile, and the most important thing which is necessary for continued progress is long and often disappointing, so learn not to give up. Few can be champs, but those who are have usually persevered over the years.