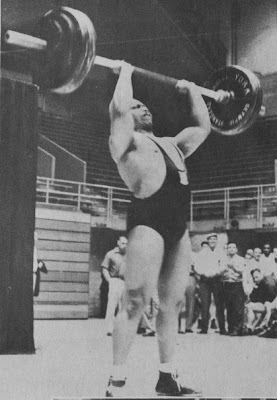 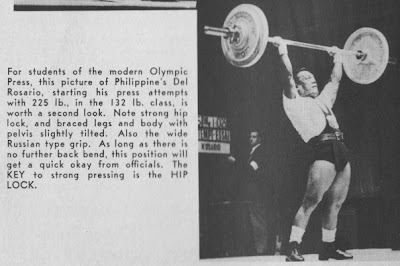 1.) I have a question regarding the proper breathing on the Clean & Press. Some lifters I have noticed will get set, take one deep breath, clean the weight, await the required two seconds and begin the press proper, all the while holding their breath. Others will inhale deeply, clean the weight and then exhale, taking another breath while awaiting the referee’s signal to begin the actual press. In other words, do you regard it best to do the entire clean and press on one breath or, after cleaning, take another breath before pressing it?

2.) Everyone I know also practices the bench press as a Press assistance exercise. In this exercise do you recommend a shoulder width grip or a somewhat wider grip as best for all around strength?

This is a question that comes up fairly often among barbell men who have not been fortunate enough to train in the company of topflight lifters. Many new lifters have tried the “hold your breath” technique, and in consequence, “blacked out” during the last stages of a heavy Clean & Press. Some few men appear able to do this and get away with it, but among the lifters at York the consensus of opinion is that you should take two breaths on this lift; one before you clean the weight, and the second before starting the press from the chest.

Actually, some men seem to able to “breathe the bar up” by beginning to inhale while awaiting the signal, and continuing to breathe in while pushing the bar aloft. Most men, however, take in a good deep breath and press on full lungs. Practically all of lifters have accustomed themselves to holding the bar at the shoulders for the referee’s signal, and THEN inhaling deeply just previous to starting to press.

I have only seen a handful of lifters who take in one breath before the clean, and complete the whole press on this one breath. This method has several obvious disadvantages. One – you are apt to run out of breath and “black out” if the air is held too long, and two – you are apt to start the press before you really get the referee’s signal. There is also the danger of running out of breath if the clean is not made perfectly; any foot movement of staggering will cause the official to withhold his starting signal until you are absolutely still and have the body under control.

Probably no two lifters press exactly alike, since very few men are identical in leverage, so training and procedure on this lift must depend upon the individual. However, most of the more successful pressers have certain similarities of style. The tendency at present is to take a somewhat wider than average grip, and concentrate on a good starting “drive.” Men who do this must be certain they are in a strong, rigid body position, and thus able to impart all the drive they can legally use. This means they must hold the bar for a good pause at the shoulders or chest, and therefore they cannot afford to fool around with a precarious “one breath” deal.

This brings up the question of “how much drive can you get away with?” The drive is essential to top pressing, and it deserves a lot of thought. Actually, you can be turned down by the officials if you impart too much obvious drive or jerk to a press, and so a study of technique is in order.

In the old days, when the strict Military Press was in vogue, absolutely NO drive was permissible, but with the advent of the looser Olympic Press many strange movements have come into this lift, the last being the infamous Russian “knee-kick,” which amounts to a jerk. We would say that the best method to distinguish between a GOOD press and a BAD press would be whether the “drive” is in the nature of a true DRIVE, rather than a JERK. The drive is okay, the jerk or heave is not.

The rules say there is absolutely no body or leg motion permissible in the press. This would include any back bend that took place during the lift. It also rules out the sneaky drooping of the shoulders employed by some lifters to give impetus to their initial drive.

A press will pass in any competition if the lifter remembers three things. Do not take an exaggerated back-bend to start your press. You can have a small shoulder lean – but do not assume the appearance of a bow ready to unleash an arrow. Be sure your legs and hips are LOCKED. Wait for the signal – then inhale – and you can drive as hard as you like – providing you do not get body motion, ad this includes leg motion, into the lift. Look straight forward at all times as the bar goes up – do not allow your head to fall back to stare up at the bar.

My final recommendation is to learn to press as naturally as possible. This means that breath-holding is out. In order to be comfortable and at ease with the bar at the chest, it is necessary to take in a deep breath at this point. At first you may not be able to press quite as much as you formerly did with the one-breath FAST press, but each day you will find it easier to do, and you will finally come to the realization that the one-breath deal was for the birds.

Finally, about bench pressing as an assistance exercise. I would say that the normal pressing width should be used, rather than a wide grip which brings the pectorals into full action. You will also find that pressing on a nearly upright incline bench is good, and the best of all assistance training is taking a barbell from the squat rack and doing two or three reps with heavy weights, repeated with about a three-minute rest between sets. The Russian jerk press is also a good training practice, taking the bar from the rack and imparting a quick knee jerk, but otherwise pressing out the weight and maintaining the upright press position. The only danger of this technique is that you may try to use the “knee-jerk” in competition, and a watchful judge will be on you like a ton of bricks!