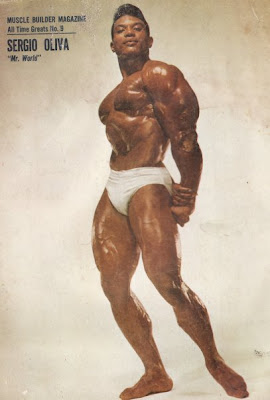 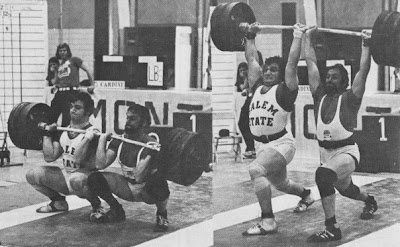 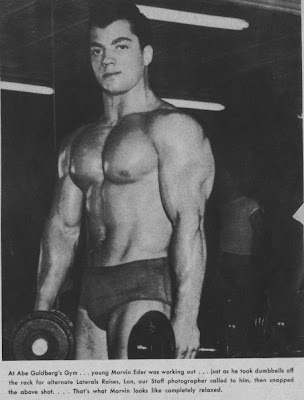 Weightlifting Can Improve Your Physique
by Ivan Dunbar

Believe it of not quite recently I chap training in the gym approached me in a rather confidential manner, pulled me to one side, and said quietly, “What’s these Olympic lifts I hear some of the members here talking about?”

Unable to resist the opportunity, I glanced furtively over my shoulder, then back to our friend, and said seriously, “It’s something we used to do in the old days – long before your time.”

“Well, as a matter of fact, and keep this under your hat, they were. Very good – especially for shoulder and back development.”

“Great,” he replied enthusiastically, “can I do some?”

Unfortunately, at this point, I had to dampen his enthusiasm by telling that the gay abandon that goes with such training (not to mention the noise) was alas, due to landlord restrictions, no longer available. However, it did germinate the idea for this article, and for that at least, we must be grateful.

When Sergio Oliva visited the London Universe a few years ago he spoke of the importance Olympic lifting had played in building his physique. In fact, I’m not sure if it’s generally known, but Sergio started off (before and after he left Cuba for America) as an Olympic lifter, and totaled almost 1000 lbs. as a light-heavyweight.

At that time – around 1965 – his training partner was Bob Gajda, who became Mr. America the following year. Both were still relatively unknown outside their area, but both were possessed with ambition in abundance. Bob Gajda had already sought out Bob Hoffman’s advice on physique improvement, and Hoffman had recommended some Olympic lifting. It was the perfect match.

Oliva was, on the one hand, already his training partner and a fine lifter, and, would you believe, gradually becoming interested in bodybuilding. Gajda, on the other, a fine bodybuilder, keen to do Olympic lifting. Each decided to help the other, and accordingly, respective schedules were drafted out. It required a six nights per week training routine – a tough prospect, by any standards. Those of you who have trained six times weekly know it can be an extremely tough proposition. If three of those days are spent Olympic lifting, believe me, it can be murder.

At the same time, Sergio said, “Man, it was murder. We both put a lot into our training in those days. You know how it is when you start – there ain’t nothing going to stop you. Bob was a hard man when it came to training – and I was no slouch either. Add a personal competitive spirit to such exchanges and you’ve got real action – real action!

Bob Gajda was equally enthusiastic. Shortly after their encounter he wrote, “To tell the truth both of us didn’t realize what we were getting ourselves into. We both loved competition, and this we had – in plenty. I would eagerly plan the toughest bodybuilding I could think of, and I would try to best Sergio, and he in turn would stay awake at night thinking of some torture that would make me submit. The results were great for both of us. I was overwhelmed at finishing second in both the most muscular and Mr. America contests. The following year I finally won. I’m sure Olympic lifting improved my physique enough to take the title. In fact after competing in the world championships in East Berlin I really got the bug for lifting and have not done any serious bodybuilding since. I don’t think my physique has suffered as a result at all.”

Such accolades from two of the world’s finest physiques must warrant some serious consideration, though I personally have never been in any doubt whatsoever that selected lifting movements, practiced sensibly IN CONJUNCTION WITH A BODYBUILDING ROUTINE can only improve the physique. Though frankly I don’t think the average bodybuilder would benefit from the six night routine advocated by these two. I consider such training too strenuous for the average lifter, unless you happen to be one of the privileged few who can train and rest as much as you please. Even then it would require at least a couple of years experience behind you – as well as a considerable amount of enthusiasm if you expect to stay the course for any length of time. Olympic lifting, practiced in conjunction with a bodybuilding routine is not for the fair in heart; but if you have facilities and are looking for improvement in trapezius, shoulder, leg and lower back areas, then I certainly recommend you give it a try.


Begin by practicing the lifting movements with a light poundage. This will develop style and flexibility – something that is often lacking in bodybuilders. Decide whether your structure lends itself to split- or squat-style lifting – and then stick to that. Give yourself a month to get the “feel” of lifting, and study (if you can) top lifters, live, on tape and in photographs. Continue with your bodybuilding routine during this time and either start or finish your routine with 30 minutes of lifting. Either way it will enable you to prepare yourself for bigger things to follow.

When you feel you have progressed enough to embark on a more serious programme, try this for six weeks or two months :

Don’t worry about those pectoral muscles, or for that matter any other bodyparts – they won’t fade away. In fact you will find considerable improvement all round, and may even find the area’s not “directly” worked will improve. When you return to normal bodybuilding (if you do) you will find your new strength and confidence with the weights will enable you to use heavier poundages – something which will almost guarantee improvement