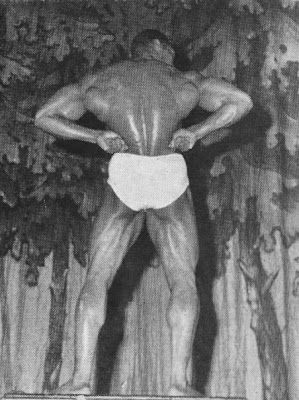 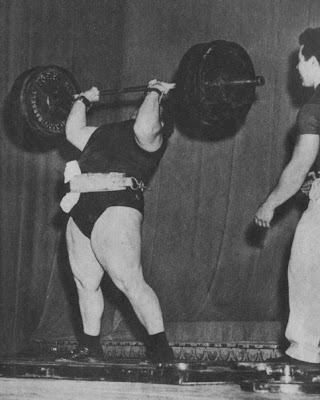 The Continental Clean and Jerk
by Jim Halliday (1959)


The lift I am going to deal with in this article is not very popular at the present time, but some years ago was a feature of the Amateur Championships. as it has always proved popular from a spectator’s point of view (probably because of the poundages it is possible to elevate overhead), I can only suggest that the reason for its decline in popularity is the fact that lifters get insufficient reward for good performances, in comparison to the severe work attached to training.

For the lifter who is good on the jerk, with a “below-par” clean, this movement offers good opportunities for raising his maximum overhead poundages, and the method of performance, allowing as it does for high poundages to be handled, is extremely good from a power-building point of view.

At one time it was suggested as an aid to the Clean itself, but I feel that this theory is misleading because the timing is different, and practice of this movement, without doing a larger amount of work on the Clean proper, is apt to cause the lifter to cease his effort at the halfway stage, when, in fact, he should really be increasing the effort at just that point. Nevertheless, there is no doubt that Olympic lifters do receive benefits from practicing this lift, and as long as the point mentioned is remembered, the detrimental factors are nullified.

The lift is No. 40 in the Society list of definitions, and the rules read as follows:

“The barbell shall be taken to the shoulders in A SERIES OF MOVEMENTS, and may be rested upon or against any part of the legs or trunk in so doing. A belt may also be worn to support the bell prior to turning it to the shoulders, whence it shall be jerked to arms’ length overhead. At the conclusion of the lift the trunk shall be erect, the arms and legs straight, and the heels, if separated, held not wider than sixteen inches on a plane parallel to the lifter’s front.

“It is PERMITTED TO REPEAT THE JERK from the shoulders until the attempt proves successful or until the lifter abandons the lift. A PRESS-OUT IS ALSO PERMITTED to conclude the lift.

“Throughout the lift no part of the body other than the feet may touch the ground.

It will be realized from the above definition that almost anything is permitted in the practice of this movement. The lifter can, if he wishes, take the bar first on to his thighs, then on to the belt, then in to the shoulders. This is a popular method, but I prefer to take the weight immediately from the ground on to the belt, considering that the other method entails holding the bar too long, thus making the weight feel heavy.

The belt itself should of course be strong, and a fairly large, dependable buckle is a decided advantage. Some neat “packing’ should be worn behind the buckle to prevent the bar “nipping” the skin when it comes into position.

Lifters will find a hook grip is also advantageous for this movement because the bar has to be held for quite a length of time, and it is detrimental to have to take a fresh hold at the secondary stage. This grip is obtained by placing the thumb under the first finger, or two fingers, if possible, when grasping the bar.

There is no limit to the time to be taken at any of the stages, but I recommend the practice of IMMEDIATELY getting the weight off the belt, thus taking advantage of the reflex action of the legs.

Some lifters prefer to pause at this point, and then do two or more body thrusting movements to give impetus to the bar to assist in getting it to the shoulders. This, I think, is completely unnecessary, and is, in fact, a detrimental procedure because of the obvious tiring effect on the body.

The movement should be performed almost like a Clean proper, with the added advantage of a body-thrust from the belt assisting at the point where the “second-pull” would normally be made.

Adopt exactly the same commencing position as for the Clean and Jerk, except that, because of the need for balance over a longer period of time, the feet should be kept slightly apart. To recapitulate in brief, the position is this:

Stand almost up to the bar, feet slightly apart, and bend down, grasping the bar at shoulders’ width distance. The knees should be bent until the thighs are almost parallel to the ground, the back should be flat, and the eyes looking to the front. Figure 1 of the three photos shows this position, but I recommend a further bending of the legs to give a possibility of greater power in the initial effort.

From here the weight is taken into the position shown in Figure 2, where it is received comfortably by bending knees slightly upon it coming to rest on the belt. The next effort (taking the bar to the shoulders) is best done by NOT PAUSING in the Figure 2 position, but by IMMEDIATELY re-straightening the legs and heaving the weight upward in the manner dealt with in a previous paragraph.

The acceptance of the bar at the shoulders, and the recovery, is exactly the same as for the Clean. The Jerk naturally is the same as in a standard Clean and Jerk also, except that you are permitted more than one attempt.

The only major point to note is that when forcing the weight away from the belt you DO NOT SWING IT by sending it forward. You must impel the bar into a perfectly STRAIGHT UPWARD DIRECTION, keeping it as close to the body as possible. This is ensured by keeping the body upright when bending the legs to receive the weight, and by not allowing the buttocks to go back when the return movement is in progress.

In other words, the action at this stage is merely one of bending the legs into a quarter-squat, so that the re-straightening movement gives you the impulse to get the bar moving in the required manner.

It will be realized that, providing the point about “timing” is considered, the practice of this lift can help Olympic lifters. The first part of the movement especially (which is comparable to an extended dead lift, or high pull to belt) is useful when done on its own in groups of repetitions.

For strict body-building purposes also, the lift can be extremely valuable because the whole body is employed, and the possibility of repetition work with high poundages is an added factor in its favour when used to this end. Doing the first part (on to the belt) in groups of reps, and rising on the toes when so doing (at the same time exaggerating the extent of the dip), can have a remarkable effect on the legs and back.

For many reasons this is a lift worthy of practicing, and the results derived from a period a training will be well worthwhile, no matter what the aim of the performer happens to be.