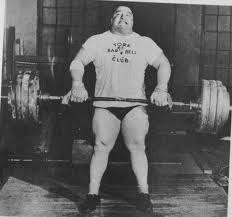 Having zoomed from obscurity to the very topmost rung of fame in the strength world during just two years of weight lifting, Paul Anderson is probably the most amazing strength phenomenon ever to appear on the scene. Now just 21 years of age, Anderson's 1,065 total, made officially November 7, 1953, eclipsed the mark it took no less a strength great than John Davis to establish in a dozen years of world supremacy. The "Dixie Derrick's" amazing body power as measured by his squat record - now at 820 pounds! - surpassed that of the great Canadian champion, Doug Hepburn, who trained more than three times the number of years Anderson has been lifting to reach a record of 665 pounds.

While there are some authorities who still consider Hepburn a stronger man than Anderson, such competent judges of manpower as Bob Hoffman and Johnny Terpak are convinced that Anderson holds a decided edge. It is easy to see how a man thinking superficially would rank Hepburn first. A letter from a Doug Hepburn fan, suggesting a comparison of the two strength giants, illustrates this thinking by the feats mentioned. They are as follows:

If such a contest could be arranged, of course, it would probably be wise to simplify the list in order to allow each man to make the best possible showing. The list should also be simplified to avoid duplication and this duplication is where the Hepburn supporters make their error in judgment. It cannot be denied that the more-experienced and older man, Hepburn, holds an edge in shoulder and arm strength, as evidenced by his pressing power. Pressing , however,and all the various forms of hold-outs, test comparatively small muscle groups whereas Anderson' superiority lies in the strength of the big muscles of the body and legs. Perhaps a better test of all-around strength, and certainly a much simpler one, would be:

This second list would still include four press and jerk lifts as opposed to two sheer body power (and grip, in the case of the dead lift) events, so it should not be too great a hardship on the "world's strongest man" to shoulder the weights he lifts without assistance.

During recent months, squatting has been an "off day" exercise, practiced Tuesdays, Thursdays and Saturdays when his regular training days are Mondays, Wednesdays and Fridays. On these off days he has often done three sets of two repetition squats with 780 pounds! This is more than 100 pounds ahead of what anyone else has been able to get up with once. As an indication of the incredible strength and recuperative abilities Anderson possesses, this very heavy squatting does not seem to have any unfavorable effect on his regular heavy training.

A sample training schedule is as follows:

The presses are usually done just two sets, but occasionally Anderson extends himself further. While training in the York Barbell Club gym prior to setting his record total, he had his first opportunity to work with a good pair of heavy dumbbells. Pleased with the new "toy" - a pair of 135s - he pressed them seven sets of three. He alternated the dumbbell lifts with sets of two rep presses using an extra wide grip and ultra strict style with 305 pounds on a barbell. He uses a pair of hooks to aid his grip when practicing heavy repetition pulls to the waist and dead lifts. He also uses a bounce for the repetitions. During this workout with tremendously heavy poundages, as might be expected, he rests from 10 to 15 minutes between sets and as much as an hour between exercises.

Tuesday, Thursday and Saturday
Squat - 780 pounds - one to three sets of two reps.

Other exercises Anderson uses occasionally for variety are quarter squats and bench presses. For quarter squats he uses a ponderous 1800-pound barbell, tying on all kinds of "junk" in addition to huge home-made plates. His poorest lift, and one in which he seems unable to find the same groove twice, is the bench press. In this exercise he has "only" done three sets of two repetitions with 410 pounds.