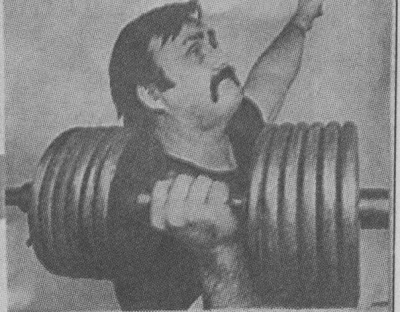 It is essential for every dedicated weightlifter or bodybuilder to utilize with full benefit in his training routine, a correct application of rest days between training sessions, coupled with a complete cessation from exercise for controlled durations of time. In the vernacular of the indoctrinated weight-trainer or weight-lifter, a complete and prolonged cessation of any form of barbell training is expressed simply as the “Lay off.”

Experienced and proficient weightlifters regard the layoff application in their training with extreme solicitude and are careful not to abuse the “rest principle’ when engaged in training. I use the word “abuse,” as the layoff can be either overdone or underdone.

Some weightlifters, when experiencing staleness, force themselves during their exercises, attempting to lift even heavier poundages. This procedure would be similar to that of an intoxicated person taking another drink in the anticipation of becoming sober. It is noteworthy to mention that if a short-term layoff is not taken immediately after the onset of muscular or mental staleness; such staleness will increase in severity and will, consequently, require longer time to eliminate.

I have known cases, although rare, where a lifter became stale, yet refused to avail himself of a rest period for several years. This individual’s lifting proficiency became steadily worse and eventually this otherwise fine weightlifter permanently retired from his lifting goal. As the reader can see, the subject matter of this article is a very serious business indeed.

Conversely, there are a numerous bodybuilders and weightlifters who avail themselves of frequent extended layoffs for no apparent reason. Perhaps such weight trainers justify their discontinuation of training by entertaining the thought that a rest would tend to accelerate the regular progress they have been making. Such an illogical justification has prevented man a would-be-successful lifter from becoming such. Perhaps the truth of the matter is hat certain individuals lack the desire, and thus the drive to become what the profess to desire in the way of health, strength, muscular size and definition. I have heard it said that for every individual who makes the grade, there are fifty thousand who fail. This may well be the case. If so, there is no excuse for those who fail to realize their desires in the bodybuilding or weightlifting fields, as one not have to be a genius to improve the physique and its strength. All that is required is a little “grit” and determination.

1. Loss of appetite.
2. Digestive disturbances.
3. Inability to relax or to sleep.
4. Irritability, worry, etc.
5. Little or no enthusiasm for training.
6. Absence of nervous energy (especially noticeable during training).
7. No increase in training poundages regardless of alterations in the training routine.

If the condition of staleness is not too severe, a layoff of three or four days will rectify said condition. The absence of staleness well be evidenced by an increase in poundages used when exercising is resumed. Let this be your guide. If the staleness still persists GO THROUGH A LIGHT WORKOUT, performing all the exercises just as before the onset of staleness. I would suggest sets of five repetitions with a poundage that can be used WITHOUT UNDUE EXERTION. The application of a workout with the recommended light poundages is advised at this point, for if no training has taken place for a period of time in excess of four to six days, TRAINING POUNDAGES WILL DECREASE WHETHER STALENESS IS PRESENT OF NOT. This is a natural process as muscle tone and strength will lessen through the absence of sufficient stimulation via the exercises that developed these muscle qualities to their “pre-staleness” degree.

If the staleness is not too advanced, the aforementioned layoff of four to six days, coupled wit several light training periods, will put matters right. When heavy training is resumed, a gain over and above the poundages used prior to the staleness should result.

If, however, a condition of staleness has been present for several months, stronger measures must be taken in the eliminatory process. In severe cases, a two-week layoff is recommended before the commencement of light exercise. From the psychological standpoint it is also advisable to refrain from any association with barbell exercise and its environment. Coupled with the complete cessation from training should be: The partaking of as much relaxation and sleep as possible and an increased intake of foods high in protein.

The experienced weight trainer, through years of training, will acquire the ability to actually “feel” the dissipation of staleness. Weightlifters of world champion caliber and the actual champions themselves seem to know instinctively how to train regardless of adverse conditions. The instinct possessed by these men, I am convinced, was developed through a conditioning process and not, as some think, simply a gift of nature.

In cases where the lifter has progressed to a point which enables the use of great weights, “instinctive training” assumes an important role in the perpetuation of improvement. An individual in such a position is similar to that of the explorer who has entered into an unmapped and virgin territory and consequently is faced with that which is unknown. He, just as in the case of the potential world record breaker, must rely on instinct to a great extent in order to succeed in his endeavors.

One of the most important phases of the preparation for a personal weightlifting record is the correct timing and amount of rest days directly before the actual lifting. In most cases many months of pre-training have been undergone with a resultant improvement of lifting efficiency. Regardless of this, the attainment of maximum proficiency during the attempt itself is dependent on the pre-record layoff.

It has been stated that Touni,* the great Egyptian lifter, actually rested in bed for several days before a competition. This is a rather drastic measure to take, but the fact remains that Touni was in a class by himself when it came to lifting.

There are many things in life that appear to be silly when one first becomes aware of their existence; this conception, however, is stultified upon an unbiased and thorough investigation of the cause and resultant effect.

Each individual will react in a slightly different manner to an applied stimulus. In the instance of the layoff prior to record setting, I have found that four or five days rest is suitable in the majority of cases. As I mentioned, a rest period in excess of six days detracts from the standard of performance in the attempt itself because of the inevitable, natural loss of physical condition.