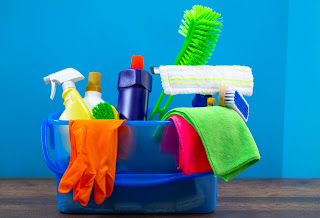 I have found that most athletes can learn to clean rather easily.
If they can do front squats and power cleans, I can teach them how to do full cleans in fifteen minutes, even less if the athlete is gifted.
But mastering the technique with heavy weights is a different kettle of fish. It's extremely difficult to  maintain perfect form when the weight on the bar is one you have never handled before. And it takes a large dose of courage to go under this new weight, even if it has been pulled high enough. Very few are capable of maintaining correct form with personal records, but that is exactly what has to be done if the lift is going to improve.
Generally, the faults are minor, but small breaks in form are sufficient for the lift to be missed. That's one of the things that always intrigued me about this lift -- the heavier the weight on the bar, the more concentration is required. But this is also true in many other sports as well, such as the pole vault and high jump.
When the bar is raised, technique has to be refined.
I want to discuss some of the most common form errors lifters make on the clean, but since I'm often guilty of assuming too much, I'll start with the basics.
If a person really wants to clean some heavy weights, he must use the hook grip. It is not a luxury, but a necessity.
For a time, Ernie Pickett and I trained together at the York Gym. One afternoon, I mentioned to him that he should use the hook grip on his cleans and snatches. He contended that he didn't have any trouble holding onto the bar with his regular grip and could do a 700-pound deadlift in that manner, so why hook? "Besides," he added, "it hurts like hell." Ernie was a big, strong example of manhood, but he had a low threshold of pain tolerance.
"Well, you're lucky to have a strong grip. I have the grip of a Girl Scout. If I didn't hook, I wouldn't be able to pull 200 pounds. But one of the reasons you're not snapping the bar at the finish is because your grip is slipping a bit," I replied.
Tommy Suggs was training with us and said, "I watched your last set and when you finished your little finger wasn't around the bar. And if your grip isn't tight when you go to rack the bar, you can't fix it right. Same idea applies to snatching."
With two of us badgering him, Ernie relented, and the hook grip did help him to clean and snatch some huge weights.
I'll explain exactly what I mean by the hook grip  . . . 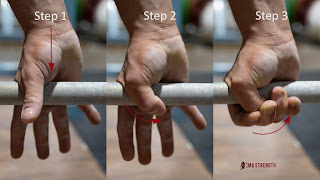 Wrap your thumb around the bar, pushing down hard, then place your middle finger (if you can) and index finger over the thumb, and finally wrap the remaining fingers round the bar. Now you're locked to it as solidly as if you were strapped to the bar. It's helpful to tape your thumbs because this will ease some of the pressure and make it hurt less. Just make two revolutions around the segment of your thumbs closest to your palms -- no more tape than this, however, because more tends to bunch up and make matters worse.
Always start out with light weights when learning to use the hook grip. Some wait until the weights get heavy before using it and this is a mistake. The pain will distract you from paying close attention to your form. If you use the hook grip from the very first warmup set, by the time you reach your heaviest set, you will not even notice that you are hooking. In time, it will become a natural habit. I still find myself hooking my steering wheel.
The best starting position for most people is as follows: feet at shoulder width with toes pointed forward. Your frontal deltoids should be slightly ahead of the bar. You can set your hips high if you like, as high as parallel to the floor. This will give you a longer pulling lever, but this high starting position is only effective if you are able to maintain it through the start and middle. If your hips come up, you will be out of position at the top and this will adversely affect your finish.
The bar must be tights against your shins. If the bar moves away from your body, it will stay away throughout the movement and be out of position at the finish.
Lock all the muscles in your back. The best way to do this is to pull your shoulder blades together. If you only think of tightening your lumbars, there is a tendency for your middle and upper back to round.
Get every muscle in your body tight, from your feet to your traps on down to your hands. Look straight ahead and now you're ready to start the clean.
I'll pause here to mention a mistake I see nearly every beginner, as well as quite a few veteran lifters make. They stay in that set position for too long, either psyching themselves up or thinking on the form points. Staying in that crouched position drains energy, and on a max attempt every little bit of energy matters. Do all your psyching and reviewing form keys while standing over the bar. When you are ready, lock onto the bar, tuck it tightly to your shins, set your feet, get your muscles taut, look ahead and go. I'm not a proponent of the dive technique, but I do believe in moving expeditiously at the start.
One other small point always helped me:
At the start, don't think about pulling the bar upward, think about pushing your feet down through the platform. This will help keep you tight and maintain a solid position. If the start is sloppy, so will be the rest of the pull.
The bar starts close to your body and stays close through the middle range. When it passes your knees, drive your hips forward and this will accelerate the bar upward. At the same instant that you're snapping your pelvis into the bar, climb high on your toes and shrug the weight. Again, I stress the importance of keeping the bar close to your body. If it's away, the finish is weakened.
I realize that some coaches teach their lifters not to bend their arms at all at the finish, using only the momentum provided by the powerful traps to complete the pull. I, however, believe the arms should bend immediately after the traps have been contracted. The prime movers of the upper arms, brachialis, brachioradialis, and their respective attachments, are powerful groups. True, they are not as strong as the traps, but they can provide thrust for that critical final pull. If all the groups are coordinated perfectly -- traps, calves, and arms -- the bar will jump at the top.
I've had some lifters contend that bending the arms isn't really necessary for a solid finish on the clean. Instead of arguing, I ask them to do an experiment in the power rack. I set the bar on pins below the knees, and have them strap on and pull the bar as high as they can, using their regular straight-arms method. I mark the height they achieve and put a second set of pins in the rack at that spot. Then I have them pull again, but this time I tell them to finish by bending their arms. Some hit those top pins so hard they rattle their teeth. 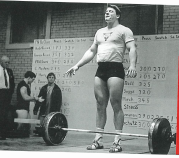