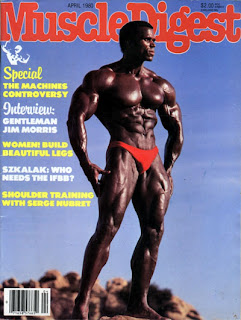 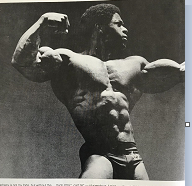 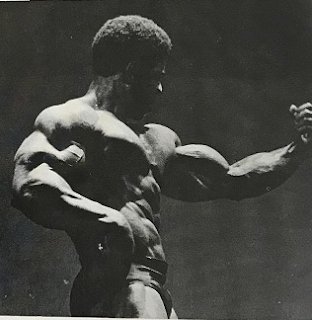 Prophecy is not my forte, but without the aid of Old Moore's Almanac, these captions accompanied contemporary photos of Bertil Fox in 1968, after taking the Jr. Mr. Metropolis.

"Bertil at 16 is the youngest bodybuilder at Calle's gym and has made terrific gains in eighteen months, already having 17" arms, and should make a formidable impression at this year's Jr. Mr. Britain." 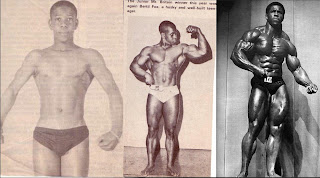 He did. He took the title, after which was written, "Junior Mr. Britain '69, Bertil Fox is a phenomenal Junior with a brilliant future." Some months later, Bertil gained the "on the Plinth" award in Peak, and beneath his entry -- "Current Jr. Mr. Britain standing 5'8", chest expanded 46", arms cold 17", thigh 23.5", calf 16" -- stupendous Junior who will forge himself a place among the stars of the caliber of Reeves, Wayne, and Pearl. Watch this giant climb."
After taking the Junior Mr. Britain for a second time in 1970, our comments with the photos of the victor displaying his trophy and those ever growing arms: Incredible teenager, Bertil Fox, twice titled Jr. Britain whose arm measurement now stretches the 19" mark. When in 1971, Bertil made it a hat trick, we wrote - "The best Junior ever produced in Britain, he has a trio of Junior Britain titles, now watch him make his impact on the big time."
Following the blueprint, he was to become Mr. Great Britain in 1971 (at a show in Wales where both Arnold and Sergio appeared). What elevating company! This lad was indeed moving up, and out, and around. 1972 saw Bertil add a Mr. United Kingdom to his list, then '73, '74, '75. There continued a long list of placings in national contests, till '76 which was truly his year. Mr. Britain, Mr. Europe, Mr. World (plus all the subdivisions as well), all fell to this likely lad from the London suburbs.
So how did he achieve all this? The usual and only way -- work, work and more work. In the early days he trained at Calle's, then later at Del Martin's Gym. His regular training mate is Phil Toppin, who can stand the grueling training pace set by Bertil.
https://www.dailymotion.com/search/bertil%20fox/videos
He is the epitome of the "strong, silent type," preferring to do rather than say. He practices the Arnold philosophy of willing, no . . . DEMANDING the muscles to grow. No time or breath to waste, for by day he must earn his bread as a regular working man on London's Transport system. By night, there's hard and heavy sessions of lifting those weights to force muscle expansions. He is a quiet man of quiet pleasures, shared with his girl friend, perhaps a film or TV, preferring home sweet home to happy wanderings.
Secure on home territory, he is not so certain about foreign travels. In fact, he sacrificed the benefits of training with Serge Nubret in Paris, for the familiarity and reassurance of home cooking and comforts. Even when appearing as the "star" of a show, Bertil will wait till the last moment, slip unobtrusively in by the back door, yet be ready and waiting to give his best when that curtain rises.
The physique revealed, when the spotlight settles, is worthy of any title, and Bertil is surely "the best of British" at this moment in time. He combines the most in size, muscularity and strength.
To achieve and maintain these results, Bertil pays great attention to his nutrition; including four pounds of protein powder per week. During workouts he consumes a potent combination of protein, skim milk and eggs. There are daily quantities of mutli-vitamin and mineral supplements, plus the almost compulsory bodybuilding addition of hourly desiccated liver tablets.
At a bodyweight of 220 pounds his measurements currently are:
Height, 5'9"
Chest, 52 inches
Waist, 30
Arms, 21
Thighs, 27.5
Calves, 19.5.
His usual routine when training heavy consists of 20-30 sets per bodypart.
Chest
DB Bench Press, 5 x 10 x 195 lb.
Barbell Bench, working from 400 x 5 to 500.
Incline DB Press, 5 x 10 x 165
Light Incline Flyes, 5 x 10 x 120
Shoulders
Seated DB Press (together), 5 x 8 x 125
Seated PBN, 5 x 8 x 250
Laterals, side and rear.
Back
End of Bar Rowing, up 5 x x x 400
One Arm DB Row, 150 x 5 x 8
Chins, 120 tied on
Side to Side chinning (a la Alan Stephan)
BB Shrug, 5 x 10 x 350.
Biceps (trained each workout)
Incline DB Curl, 5 x 8 x 85
Close Grip BB Curl, 150 pounds
DB Preacher Curl, 8 x 8 x 85.
Triceps
Pushdown, 8 sets with 150
Reverse Grip Triceps Press on Incline Bench, 8 sets with 180
Thighs and Calves
Standing Calf, 10 x 10 x 800
Squat, 5 x 10 x 500
Leg Extension, slow, very strict, 8 x 20 x 80
Leg Curl, slow, strict style, 8 x 20 x 100
Enjoy Your Lifting!