Much, much more from Brooks here:

I'm one who failed. I tried the program several times when I was younger, and I never had any luck with it. As I look back, it's easy to see why that was the case. I was starting far too heavy and training at far too high a level of intensity. I never adapted to the program. I just became sore, stiff, and severely over-trained. Before long, I was lifting LESS than I handled when I began the program.
Now, in fairness to me and everyone else who never had any success with the 20-rep breathing squat, there's a reason why we failed. We were following the conventional advice about how to do the 20-rep breathing squat.
It goes like this:
"Take a weight you can handle for 10 reps in the squat, and force yourself to do 20 reps!"
That advice may have originated with John McCallum and his "Keys to Progress" series in Strength & Health [search this blog for more on that series], and certainly, he popularized it to the point where it became gospel truth for an entire generation of trainees. McCallum was right about a lot of things, and some of his articles are terrific -- among the best ever -- but not everything he said stands the test of time. Remember, he also came up with the Get Big Drink, and if you ever tried the concoction, you probably still have nightmares from it.
Note: My hard copy of "Keys" still has Get Big Drink stains on a lot of the pages. Also, I found that it takes much more time and effort to scrape the blubber off than it does to slap it on too fast.
In fairness to McCallum, he may have been encouraging trainees to train hard on their 20-rep squats. But skinny trainees who are frantic to add muscular bodyweight are highly impressionable -- and most of them interpreted his words to mean that you should begin the 20-rep squat program with a weight you could handle for 10 reps -- and then force out rep after rep until you make 20 reps.
After that, you racked the bar, collapsed and lay on the gym floor for 10 or 15 minutes. That's what I did, and it's what almost everyone has done. It's what we thought we were supposed to do.
The next day, you're so sore you can hardly walk -- and the soreness is still there the next time you squat. For many trainees, the soreness never goes away. Each workout is an all-out, do or die effort that requires every last ounce of physical, mental and emotional strength in your entire body. For a skinny beginner, it's far too demanding -- and it almost never works. You simply can't stay with it. You burn out.
Here's a much better way to do the 20-rep breathing squat program.
Take a weight you can handle for 20 reps in the squat, and do TEN reps in your first workout. If you're not sure what you can handle for 20 reps, be very conservative. Choose a weight that is not heavy and not demanding, and make it a relatively easy workout.
Don't worry about starting light. Starting light is good because it allows you to concentrate on doing your reps in good form. There's a special way to breath when you perform breathing squats, and you should practice it with lighter weights so that it becomes automatic. That way, you'll be able to breath the correct way when you're handling a heavier weight.
And remember this: it's not where you start, it's where you finish that counts. Peary Rader began the 20-rep breathing squat program with an empty bar. Two years later he was handling 350 pounds for 20 reps -- and he was almost 100 pounds of muscle heavier than when he began the program. If he had started with a heavy weight on the bar, he probably would have failed to gain a pound.
Getting back to our progression program -- the next time you train your squats do 11 reps with your 20-rep weight.
The next time, do 12 reps.
Add one rep per workout until you are doing 20 reps with your 20-rep weight.
After that, gradually add weight to the bar. Your workouts will start to become heavier and harder. But now you will be ready for them. You will have built the foundation for success.
Here are some additional tips for the 20-rep breathing squat and how to use it with maximum effectiveness.
First, be sure that your squat form is perfect. If you have any squatting problems, they're bound to show up -- and to get worse -- as the reps get higher. This is one reason why the program works better for an intermediate trainee than a beginner. Beginners need to learn how to squat before they can do 20-rep sets safely. They also need to develop their upper back muscles so they can stand the weight of the bar for 20 reps.
That leads us to an important tip from Joseph Curtis Hise, one of the pioneers of the 20-rep breathing squat. Your lower back has to be strong enough to handle the program. If your lower back isn't strong enough, you'll start rounding your back and leaning forward -- and that's a good way to hurt your back. Some trainees require a program of back specialization before they can handle the 20-rep squat program.
Hise also suggested that trainees do heavier squats before their 20-rep squats. For example, you might begin with 5 x 5 and finish the workout with 1 x 20 reps. The advantage of this is that you are well warmed up for the 20-rep set, and the weight feels "light" in comparison to the heavier weight used for 5-rep sets.
Consider using a cambered squat bar. 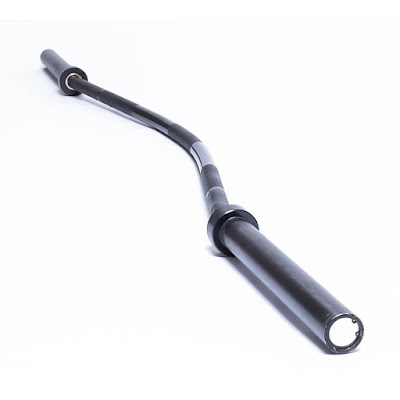 They're easier on your back and shoulders when you do high rep squats. Hise was a huge fan of the cambered bar.
As you get stronger and your 20-rep squirts become more demanding, you should use some sort of cycling program so you're not working at your maximum in every squat workout. Some trainees have done well by alternating 5 x 5 one week and 20-rep squats the next week.
Another option would be to follow a simply cycling program where you start with 10 reps in the squat and build up to 20 reps -- then add weight to the bar, drop back to 10 reps, and build back up. The Hepburn one rep per workout progression system would work very well.
It's also a good idea to include some lighter squat workouts in your training cycle. In other words, include some deload weeks. These will help extend the length of your squatting cycle.
In this regard, note that the Paschall Pause would work extremely well with the 20-rep breathing squat.
Note: for more on the Pascuall Pause, see "Dinosaur Training Secrets Vol 3" -
https://www.amazon.com/Dinosaur-Training-Secrets-OLD-SCHOOL-PROGRESSION-ebook/dp/B00YBGVVOI

Here's another important point. The 20-rep squat program originated at a time when most trainees did total body workouts three times per week. Thus, the 20-rep squat program is usually presented as a three-times per week program. But Peary Rader believed that a twice a week squatting schedule was better for most trainees. Personally, I think it's best to use a divided workout schedule and then squat once every five, six or seven days. And remember that some trainees may have done best by squatting once every 10 days!
Here's a final thought about the 20-rep squat, and about the value of beginning the program with aa light weight. It comes from a man named Joe Mills. Joe Mills was one of the best 132 pound lifters in the U.S.A. in the 1930's and early 1940's, and went on to become a legendary weightlifting coach at the Central Falls Weightlifting Club, Rhode Island.
I recall reading that Mills once went on a unique variation of the 20-rep squat program. (I don't remember where I read this, and I may have the details a bit wrong, but this is the gist of what I remember). Mills started with 125 or 135 pounds in the squat, trained every day, and added 5 pounds to the bar in every workout. He finished the 30-day squat program by handling 275 or 285 for 20 reps.
That kind of program would be far too demanding for most trainees, but it's an excellent example of the idea of starting with a relatively light weight and gradually working up to a much heavier poundage.
Caution! The Mills program might work well for many trainees, but you'd probably do better by training your squats two or at most three times per week. The key point is starting at 125 or 135 pounds and working up to 275 of 285 pounds.
Again, it's not where you start, it's where you finish that counts.
Similar points apply to any other program where you perform high reps. Start light and easy, and add weight slowly and progressively. Rome wasn't built in a day, and neither was any strongman.
Enjoy Your Lifting!